by Aaron Cunningham
in Blogs, Slider

Sunday 8th March 2015 is International Women’s Day, even in Northern Ireland where we’re blessed with a huge selection of local music talent. So we thought we would celebrate some of the best female artists from these shores.

The wonderful Hannah McPhillimy left a strong impression on us when she played our Christmas show last year. And it hardly needs to be said that SOAK is a favourite, a local artist who has risen to such huge heights this year and is just setting off on a world tour. There is such a range of styles in the local scene as well, the experimental Katharine Philippa, Shannon O’Neill of the hard rocking Sister Ghost and the ethereal Gaze is Ghost. We couldn’t neglect Frances Mitchell, frontwoman of the electropop LORIS who for all the world look like Northern Ireland’s next big thing.

We can only write about a selection of these fantastic female artists of course. Below, a few of our writers give their thoughts on their own favourites. 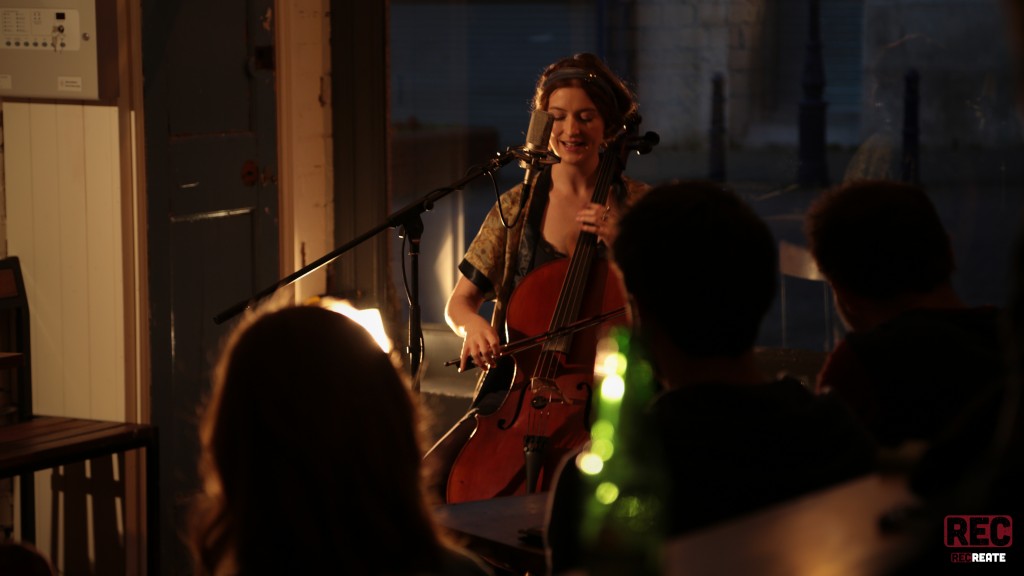 There’s no doubt about it, Alana Henderson, the 25 year old Dungannon derived singer-songwriter-cum-cellist has went from strength to strength following the release of her debut EP ‘Wax and Wane’ back in 2013. It might have been only two years ago, but what a crazy two years it’s been. We’ve had the release of debut album ‘Windfall’, seen her grace festival bills on both home soil and beyond. She’s even made her big time TV debut, appearing on Letterman.

All that aside – What does she sound like? In three words, mysterious, mesmerising, and beautiful. Telling tales of lost love and relationships, Alana’s sound fuses elements of folk, pop, classical and blues over poetic lyrics and delicate vocals, creating music that enchants and allures the listener instantaneously.

With her fresh take on traditional folk, 2015 promises to be yet another extraordinary year for this original, hardworking vocalist. Currently on the road with Grammy nominated artist Hozier, touring across the globe, Alana is certainly raising her profile whilst cementing her place as one of NI’s great female talents. 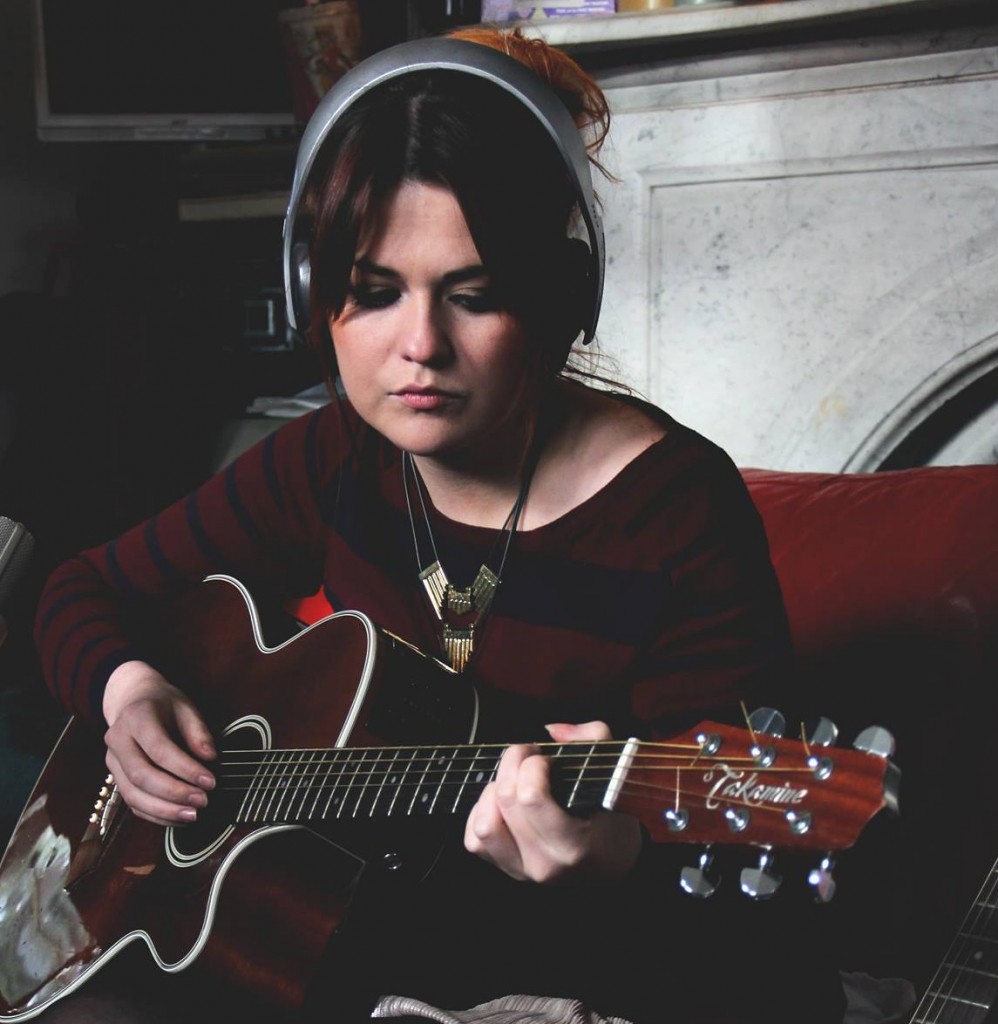 Allie Bradley is one brave and talented chick. I got a chance to see her perform during Culture Night in 2014, where she played an intimate gig geared with only an acoustic guitar and her smooth voice. Her last EP ‘Running for cover’ was launched in 2013, and despite the fact that she’s stepped off the stage for a ‘breather’ there’s still a lot of new songs to come.

Allie started very early in the music world, in school she was the one asking the teacher for her own vocal solos and one of the best gifts she got was a guitar that she used around the house, playing it alongside her cousins when she was only ten years old. Growing up listening to a lot of traditional Irish music and artists like Cathy Davy, Joni Mitchell, John Mayer gave her a beautiful, indelible musical base that she uses very well. In fact, every recording has a different sound, it varies between soul, folk, country, and many others. Even Allie herself can’t put her tracks down to one genre. Last year she brought the whole band into the studio to record new music but it hasn’t been released yet.

This girl is taking over every contest for singers/ songwriters (United Airlines Belfast Nashville Songwriters, Dawsons Belfast Singer Songwriter competition) by playing her own tunes alongside unusual choice of covers (Kacey Musgraves, Wayfaring Stranger). As I’m writing these words Allie is getting ready to take off for Nashville, Tennessee to play a set of gigs in venues like Bluebird Cafe (where artists like Garth Brooks and Kenny Rodgers have performed over the years). She fell in love with the atmosphere in America over many years of travelling there so I’m sure she will feel at home and will deliver her best. 2015 looks very promising for the young musician; she already has new material ready to record, so we can expect her being back in the studio very soon. Hopefully we will also get a chance to see Allie performing in local venues more often, so keep your eyes and ears wide open! 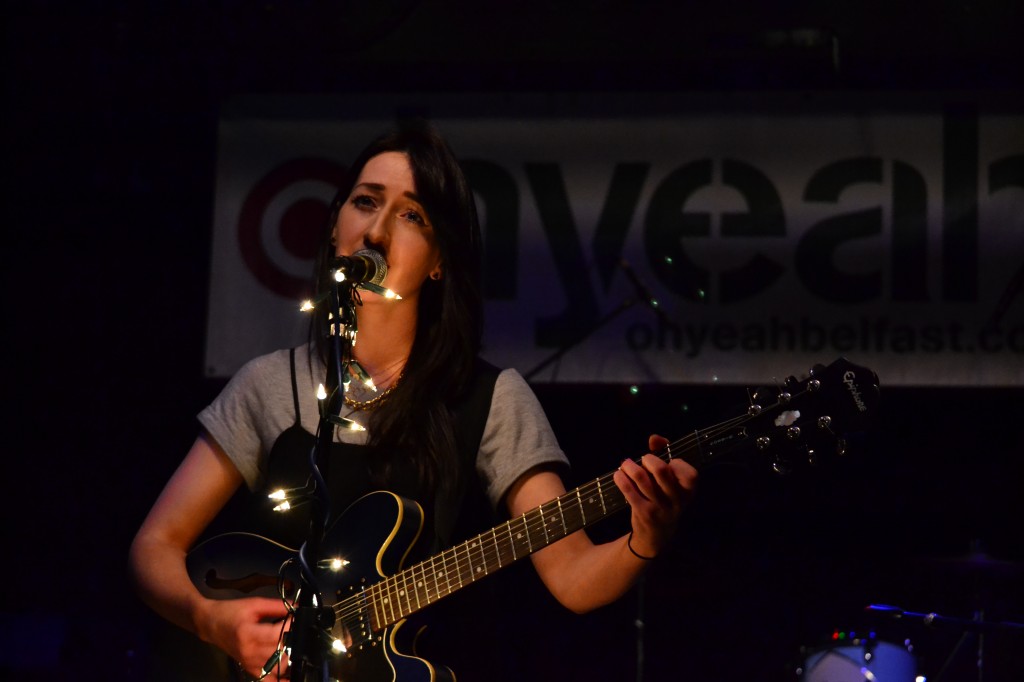 Fiona O’Kane is best known locally as the frontwoman, oftentime guitarist- and more recently, primary songwriter – of the indie-pop, Belfast-dwelling, Bastille-supporting band, Runaway GO. However, for many, she’s immediately recognisable as the sweet, sultry voice that covered the Four Tops’ hit, “Can’t Help Myself”, used in Durex’s ad campaign for last year’s Earth Hour, racking up 8m hits on Youtube.

I, personally, first had the pleasure of setting sight (or more appropriately, ears) on Fiona at the penultimate Glasgowbury festival. I’m fairly certain that I’d dragged my friend all the way up to Eagle’s Rock, and then away from the “Small But Massive” stage, where we’d spent most of the day, with the reasoning that we would secure our place at the barrier for Mojo Fury’s set (no shame. I’m still flying their flag all these years later). Alas, there was a mishap with our timing; we hurtled into the tent only to witness a band setting up that definitely weren’t our beloved Mojo Fury. Thankfully, my uncharacteristic punctuality transpired to be serendipitous. Too lazy to trudge all the way back through the (relatively speaking, not too thick) mud, we decided to stay on and give Runaway GO a shot. By the end of their first song, I was utterly speechless (which is a rarity).

Fronted by Fiona O’Kane and Dave Jackson, whose vocal harmonies flowed in a beautiful, completely complicit way that formed both the basis and top layer of the melodic structures that would firmly anchor themselves in my head for a small eternity. Although Jackson’s vocals were equally deserving of effusive praise (to the point that my friend and I felt the need to corner him after their set for a photo – I remain unashamed), Fiona’s ethereal, yet resilient vocals really resonated with me. Like a less flighty Kate Bush, her incredible voice is capable of lending real power and raw, honest emotion to hushed, subtle inflections, breathy, compelling strains, and staggering soprano notes alike. Her formidable talent is of no surprise, considering that she has been writing and recording her own music from the age of 14. Fiona’s unique voice is like the most beautiful piece of glassware you’ve ever witnessed; one that you experience mortal fear at the prospect of damaging, but that you eventually come to realise is impossible to shatter, no matter what you do, such is its strength.

If any further proof were needed, I promise you that the goose bumps that I experienced after first hearing ‘Delicate Man’ left my skin tented for a good ten minutes.

On this International Women’s Day it seems only fitting that we here at Chordblossom pay tribute to our First Lady of Rock, Northern Ireland’s own Jen Walker from Ajenda.

Since forming around six years ago, Jen and the band have self-released three EP’s and toured extensively in both the UK and further afield; tours in Finland and Slovakia along with festival appearances at Hard Rock Hell and Ibiza Road Trip have helped to spread the word about this diminutive power house vocalist and her equally talented band.

Their debut album ‘Unrecognizable’, released on Jenuine Records, was very well received both critically and by the public. The singles that have been released perfectly sum up what Ajenda are all about: ‘Hatred and Greed’ is a rousing, bluesy number which showcases Walker’s rockier vocals, ‘Otherside’ is a dreamy, shimmering number, whilst ‘Tattoo’ is an urgent yet poignant tale of secrecy and lust, with Walker’s vocal performance at once vulnerable yet tough.

Live, this band are a revelation, all rocking riffs and thumping beats, with Walker’s voice at its husky and emotional best. Poised and professional yet clearly enjoying herself immensely, she interacts joyfully with both the audience and her bandmates. The result is a guaranteed great night out.

Drawing comparisons to artists such as P!nk, Heart and Halestorm, Jen Walker is a ballsy, no-nonsense performer who has maintained her talent, integrity and identity in a sea of dudes in the Northern Ireland rock scene. That unquestionably warrants her inclusion in this piece on International Women’s Day – she’s a role model for women in every genre. 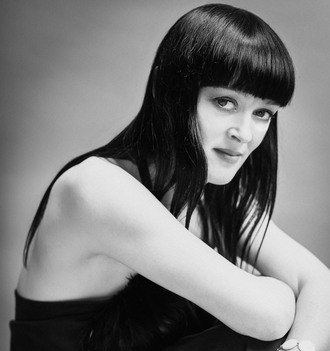 Bronagh Gallagher is the living proof that women can and will achieve whatever the hell they want to. An Irish-born singer and actress, she can turn her hand to pretty much any role and song with the most positive and endearing personality. Born in 1972, the Derry girl became heavily involved in performing arts in her teenage years. Bronagh made her screen debut in 1989, appeared as Bernie McGloughlin in The Commitments in 1991 and was cast in Quentin Tarantino’s Pulp Fiction in 1994. In the years following she appeared in George Lucas’ film prequel Star Wars: Episode I – The Phantom Menace in 1999, Tristan + Isolde in 2006 and Sherlock Holmes in 2009.

Bronagh features on Tired Pony’s 2nd album ‘The Ghost of the Mountain’ an album in itself that is pure perfection. Bronaghs’ solo music is a soul-filled treat to the ears, her first album – ‘Precious Soul,’ was released in 2004 having written the music and lyrics, played drums and laid vocals. The second self-titled album is my soundtrack to life. The no nonsense, empowering tracks such as opening track ‘Fool’ followed by ‘Make A Move’ and ‘Love Will Find You’ is the strong independent, dust-yourself-down-pick-yourself-up-again lyrics that leave you feeling that you can actually do and achieve that thing you want to do but don’t think you can/are good enough/smart enough/pretty enough.

Bronagh’s truth in her lyrics is 2 fingers up to that little voice in the back of your head. And that is pretty awesome.

CRUISING Set For Sunglasses After Dark