by Peter Cinnamond
in Blogs, Festivals

So here we are, merely hours before Radio 1’s biggest live event of the year kicks off in the maiden city and boy are we excited. Tickets are gold dust this weekend and for good reason. There hasn’t ever been a festival of this magnitude in the north…well, ever! It’s the cherry on top of a fantastic few years for the province hosting world class events. Big Weekend will take another step towards solidifying Derry’s status as a viable location for touring acts. The attention Radio 1 has put on the region has to be highly commended. It has been much more than just a weekend festival and the legacy left by the events and workshops for young people will been seen for years to come.

However before we get all starry-eyed about the bright future of the city we’ve got a festival to enjoy. First things first, no wellies required.  That might be a given for the locals but anybody traveling just remember that Ebrington Square is based in the heart of the city and you’ll be standing on solid ground. Which we can all agree is a refreshing change. There’s three days, two stages and over sixty acts. That’s a lot of music. But do not worry, we are here to give you a gentle push towards the acts we highly recommend you check out. (with a few examples of them playing live too of course) 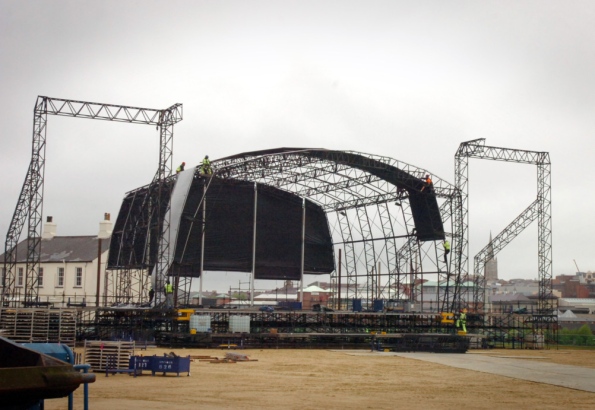 Sneak peak // A photo taken this week showing the progress of the open air main stage.

This year the event might be downsized from the huge Hackney Weekend in 2012 but it has made up for it in the form of an extra day. Friday therefore has taken on the traditional Saturday mantle of “dance music day” which can be seen with Oxegen ’13 headliner Calvin Harris closing out the Main Stage. Things kick off slightly early on Day 1 @ 3pm; ending an hour later than the other two @ midnight. 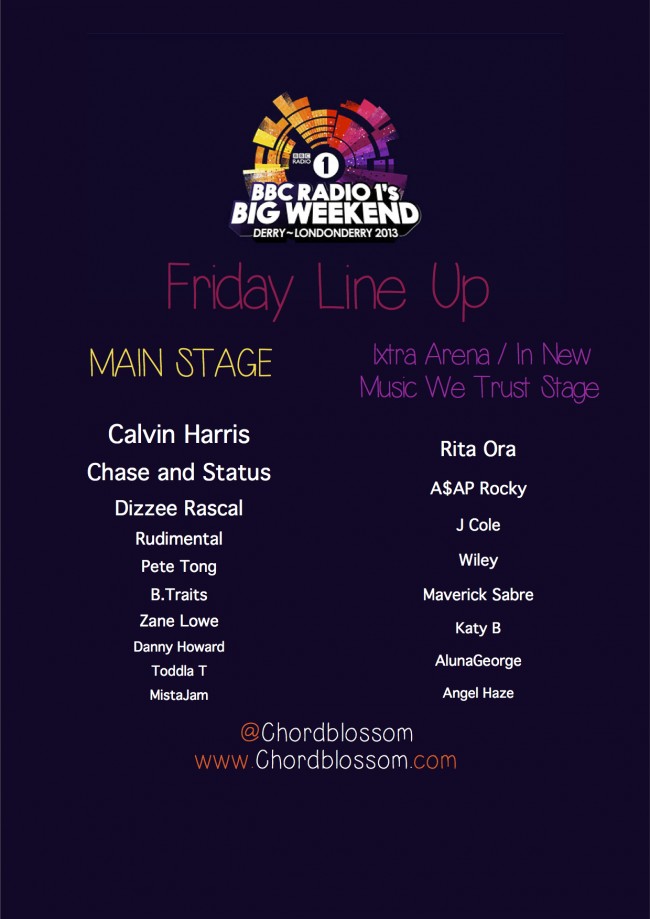 “One for the cool kids”

Critics favourite new act at the turn of the year, AlunaGeorge have successfully been able to convert that early hype into significant mainstream success. Consisting of Aluna Francis (vocals) and George Reid (production) the south London duo mix electro sampling with soulful R’n’B vocals. Their debut album “Body Music” is set for release in July so expect a full showing from that upcoming record. They were tipped as the Sound of 2013 by the BBC and we have to agree. An exciting new act which should put on a fine early evening set.

We can imagine your eyes roll at this suggestion but dismiss Dizzee Rascal at your peril! With a string of uber-hits under his belt this guy knows how to put on a stellar show. If you make time to see his set then you’ll not be disappointed. The only question is what will his set up be – will it be DJ or full band? Known to mix it up between the two, no matter what it is you’re guaranteed to have a great time. Need more proof? Just check out this set from Poland a few weeks ago. They’re loving it!

“Dance, rave and mosh the night away”

One of the fastest rising stars of the european festival scene, Chase and Status have become pretty good at this kind of thing. The indoor secondary stage would have had it’s roof blown off so perhaps it’s a good thing that they have the scope of the main stage to bring the noise. At times it might feel as though you’ve somehow walked onto a ride at Barry’s with the conductor asking you to scream louder, but don’t let that put you off.  Make sure to do your best to re-charge them batteries as you’ll be truly exhausted after C&S are finished with you. Mr Harris has some act to follow we’ll tell you. Check out their antics from last year to get you in the mood.