by Peter Cinnamond
in Blogs, Festivals

Indie kids rejoice as this is your day (kinda). It’s the traditional Sunday of the festival, otherwise known as “band day”.

Before we kick into our three picks, yes, Two Door Cinema Club and Biffy Clyro will put on incredible sets and have two of the most anticipated performances of the weekend. Therefore we have no doubt that you don’t need us to advise you to check them out. i.e. go see those two amazing bands silly! 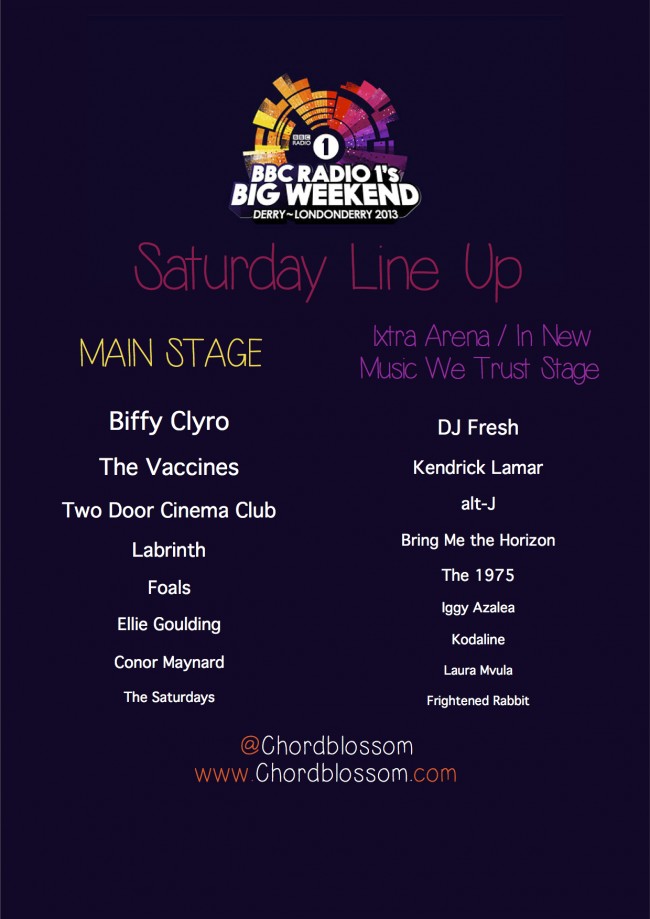 One song wonder you say? Ok, maybe you’re right. But you gotta give these fellas credit, it is one cracking tune. With that being said it has been an incredible six months for the adopted Mancunians. From barely filling the Oh Yeah Centre to booking out the Mandella Hall and other bigger venues across the UK, that shows they’re are going somewhere. We’ve been impressed with their EPs so far and definitely think that these guys have the potential for a big future. General Fiasco fans apply here, although many might feel it could easily have been the lads from Bellaghy.

“The next big thing”

If Saturday was your pick in the lottery and all that noisy rock on the main stage isn’t your thing then you could not ask for a better alternative than Kendrick Lamar. Straight out of Compton (always wanted to say that) and into the Venue in Derry this could be a landmark set at the festival. It’s quite a coup for Big Weekend organisers, Lamar is an MC where the sky is limit. Already a growing force in America, there is no reason to believe that we won’t eventually dominate the world of music. An acquired taste perhaps, but an incredible talent none the less. We’ll be there, will you?

“On the cusp of mega-stardom”

Who could have predicted the Foals would end up having one of the most anticipated albums of the year? They had a pretty steady start to their career with two solid albums to work with, but “Inhaler” blew everything out of the water. In a matter of weeks everybody was buzzing about their third effort “Holy Fire” with the band adding a more of a rocky edge to their music. Radio friendly “My Number” eventually then solidified them as the indie band of the moment. NME awarded them “Best Song” and nominated them for “Best Live Band” this year. On top of this they’re touring the world and reached no.2 in the album charts! We can guarantee that you’ll exclusively see them at the top festival line-ups in the foreseeable future. Simply a must see.