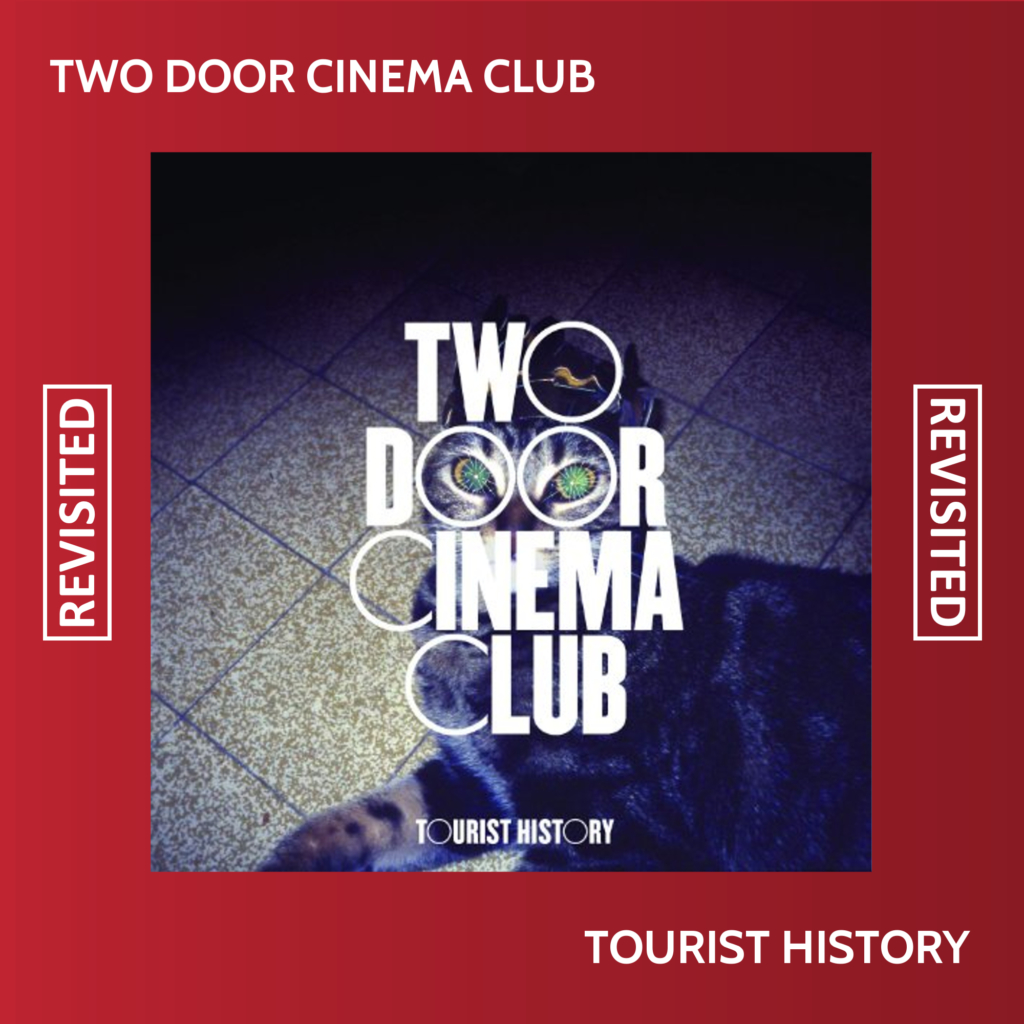 The world feels on the cusp of change, with a new decade slowly creeping into view. A Jamaican sprinter by the name of Usain Bolt is preparing to make history at the Beijing Olympic games. A young Illinois senator named Barack Obama harbours presidential dreams. Everyone’s wearing Ugg boots. Meanwhile, in Belfast’s Spring and Airbreak venue, 3 teenagers wait nervously for their cue to take to the stage.They’ll be playing songs from their debut EP, ‘Four Words To Stand On’, flanked by local heroes  Mojo Fury and The Good Fight. They don’t know it yet, but 3 of the 5 songs from this DIY record would define them for years to come. ‘Cigarettes In The Theatre’, ‘Do You Want It All?’ and the massive ‘Undercover Martyn’ are belted out to a huge reaction from the mainly student crowd.  They may not have a drummer, but the momentum is pounding. The foundations are set. Within two years Two Door Cinema Club would be an international name.

On issue 2 of our new series exploring classic Irish records, we ask the question; Tourist History by Two Door Cinema Club – Was it really that good?

Two Door Cinema Club lay down the gauntlet 3 tracks into ‘Tourist History’. ‘Do you want it all?’, sings Alex Trimble, his voice shaking like Ben Gibbard on ice skates. They certainly did, the Bangor trio providing more hooks than Peter Hook and Captain Hook’s short lived side project. By the time Two Door arrived at the French HQ of their new record label Kitsuné, they had already left much of their short-lived growing pains on the Spring & Airbrake’s sticky floors. Gone were the self conscious teenagers too nervous to move on stage, replaced by a trio with a growing sense of confidence built upon by the aforementioned ‘Undercover Martyn’ and co.

Working with Grammy award winning producer (and ½ of dance duo ‘Cassius’) Phillipe Zdar proved an inspired move, as he sought to mix the band’s already blistering pop sensibilities with a human being behind the kit. This added a fragile touch, as the trio’s sound expanded beyond the confines of impossibly quick drum machine beats (although they were still used sporadically on this record).

‘Cigarettes In The Theatre’ was given a clever polish, including an atmosphere-building intro that was to become a trademark for those early years. The Bloc Party shuffle of  ‘Come Back Home’ rubs shoulders with ‘What You Know’, a song destined to blow festival crowds away from its earliest incarnation. 10 years on from its LP debut, teenagers may now closer associate the snappy intro with a TikTok meme, but the enduring groove that has soundtracked many an indie club night still sounds electric today. The fist bumping, electronic loops of ‘I Can Talk’ is similarly invigorating.

Two Door Cinema Club never had an issue writing danceable pop singles. Where it could be argued ‘Tourist History’ falls flat, is the search for meaning beyond the riffs. Trimble’s tales of youth and expectation, while brilliant on their own, fail to tell a consistent story in the context of a record. It feels almost like a greatest hits collection, rather than a complete body of work. Their absolute dedication to hitting the sweet spot made ‘Tourist History’ a sales marketer’s dream; Just think how many of these songs you’ve heard on adverts! It’s something on later records (particularly the follow up ‘Beacon’) that would be addressed more directly. That said, Alex Trimble always seemed to hit back at these doubts with undeniably brilliant one-liners, like ‘Undercover Martyn’s ‘She spoke words that would melt in your hands’.

Elsewhere ‘You Are Not Stubborn’’s jovial groove melds with a vocal melody wrapped up in sadness. Sam Halliday’s riffs crash in and out of focus, keeping their collective head above the waves. Yet there’s something in Trimble’s vocal, an acknowledgement that the age of innocence is over. Their dreams are about to be realised and he knows it, but they must leave their old lives behind. Two Door Cinema Club were about to make their own tourist history. It’s an unusual way to end things, with no hint of a tender acoustic moment. There’s no need, Two Door find it on their own.

Listening back, it’s astounding how fresh these songs feel. It’s the sound of bold invention, of youth and fearlessness. Yes, the reference points are obvious, but that’s entirely the point. The absence of the shimmering ‘Costume Party’ (b-side for ‘I Can Talk’) is perhaps the only disappointment across ‘Tourist History’s 10 tracks. Just ask Kanye West!*

*Kanye sampled ‘The Costume Party’ on his track ‘Use This Gospel’.