My name is Katie Morgan, and I’m an events promoter for Volume Control. There are 12 of us on the team aged 14-18, and we put on gigs for young people at the Oh Yeah Music Centre in Belfast. I’m writing today on behalf of the team because we have been invited by Chordblossom to bring you regular blogs on our activities and upcoming events, which we are super-excited about!

For those of you that may not have heard of Volume Control, it’s an events mentoring project managed by the Oh Yeah Music Centre. It was launched in September 2009 when a 15 year old music fan named Ryan McCann walked into the centre and insisted on organising a gig for under-18s. From there, a team of young people with a similar vision came on board and Volume Control took off.

Over 50 young people have benefited from Oh Yeah mentoring and guidance in putting on their own gigs. Some former members of Volume Control have even gone on to work, study and volunteer in the entertainment industry. So in March this year when they were recruiting a new team for 2013, every one of us jumped at the chance to apply. Our first gig was a family-friendly event with the amazing Wonder Villains, 20 Second Century, Ryan McCann and a band called The Clameens that we selected after running a competition. We hardly knew each other at that stage, and it was a great way to get us working as a team. It was a brilliant day!

With help from our mentors, we meet every week after school and at weekends to plan, organise and promote our own events. In April we invited Conor Scott to headline our follow up gig. Conor had just appeared on The Voice UK and things were really starting to take off for him. This was the first gig that we fully organised ourselves and it almost sold out. What a buzz that was.

So what else have we been up to and what have we got planned next? Well, what with exams and study for many of us, it’s been a pretty busy month. But with careful planning and support from Oh Yeah we have managed to get cracking on the next gig, and some of us even managed to make it up to Derry/Londonderry for some of the BBC Radio 1 Academy workshops and talks. We talked to Phil Taggart, got our photo taken with Aled Jones and met loads of great people including Paddy Glasgow from Glasgowbury Festival. Some of us even managed to get tickets to One Big Weekend too, which was absolutely amazing.

So when is our next gig I hear you ask. Well, after talking to Paddy Glasgow we decided it would be a good idea to present the next event as a pre-Glasgowbury warm up, featuring bands from the Glasgowbury bill. Paddy thought this was top idea, and has agreed to help us promote it this way. So we can exclusively reveal via Chordblossom that on Friday 28th June, we will be bringing you the amazing Runaway Go (we love them, especially after seeing them support Bastille in back in April), with support from Those Ghosts, who won Chordblossoms Kick-start competition to perform at Glasgowbury, and Susie Blue. We are so pumped to have them on board, and there’s still one more act to be announced, and some exciting info on how to win Glasgowbury tickets too!

Online tickets are available for the June 28th pre-Gasgowbury warm up gig with Runaway Go, Those Ghosts, Susie Blue and more from We Got Tickets 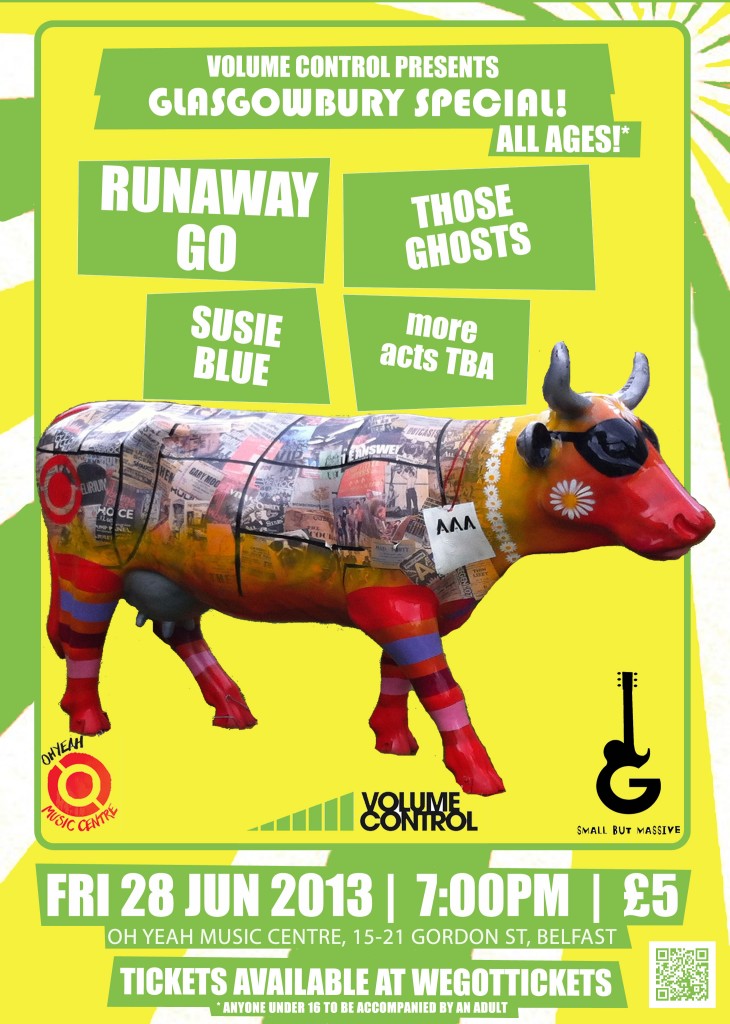