by Robert Brown
in Blogs, Features

Whether it’s a lack of funds, other commitments or a lack of ambition some of our local artists never make it further than Northern Ireland for shows. It is not too much of a surprise to find that the extremely talented His New Atlas with that desire to tour the UK and get his music out to a wider audience. Before he set off for shows in London & Manchester in November, we tasked him with keeping a diary of his travels.

Only three restless hours spent in bed staring at the celling before my journey started. My eyes bursting wide with excitement, and a dangerous coffee amount of coffee coursing my veins. The time finally came for me to leave. I grabbed my guitar, my rucksack (Which held my gear, protected by a wealth of Fresh socks, and Boxers) and headed off. I met with Luc, and Adam my pianist, and drummer, both equally stoked for the adventure to start. We boarded the plane, left, and landed in London! I had been scheduled in for a session video for 5:30PM at the venue, and sound check was 6PM. We then found out the hard way buses do not accept money. So we dragged our gear 3.5 miles to the venue. Slithered in at 6PM on time for sound check but missing the video. This was my first ever London show, and my full band’s debut in England. We hung around in the back stage area chatting to the other acts and sharing banter and beer. I walked out to check out the first band on and an American stopped me, hugged me and told me I was the reason they came to the show, now that blew my mind. An actual fan! Already this was the best show I have ever done, knowing a group of people came just for me. I was completely honoured for all 40 minutes spent on stage.

Waking up on a soft blow up bed sucks on so many levels. Day two begun and not so good as the 3.5 mile venture had cursed me with a serious cold. I put my best fight up using a hot shower, a pint of Lemsip, and a subway. We had 3 hours to sight see before the load in for the show. We walked for 2 hours soaking in the city; it was simply beautiful. After our adventure I decided to head to the venue. We left our gear in, got a short sound check and started the long wait for the show to kick off. In the mean time I had a meeting arranged so I didn’t get the nap I hoped for. Things kicked off and they went even better than the first show. There wasn’t an American fan there shamefully but people came to see me again. Setting up before my set I heard a group shout up some song titles from my most recent EP Torn Out Lungs and I was more than ready to play.

Day Two Summary: Should I live in London? Seriously?

Slept on a couch, that was pretty great actually. I headed off to catch the train from London to Liverpool for my first ever English headline show. We landed in Liverpool, my home from home, and of course we had to go to the Cavern for a celebration pint as London was a dream. Nervous for the turn out, I headed up to an open mic close by, played a song and announced my first headliner hoping I would steal some listeners. I went back down to the venue for an interview, a session video, and to catch up with some close friends. Here I waited nervously to start, there was a good crowd for the first hour of the show, but it all emptied at once. At that moment I thought “No one came to see me….”.
Then time came, and I was on. My first ever headline show. As the intro played I walked out hopeless, lifted my guitar, turned and seen 50 standing and cheering , some from the open mic too, ready for the set. This was the final, biggest, and most outstanding show on the tour. I held back tears in the final song knowing this had to come to an end. Lights off! Back home! In bed staring at the ceiling before my journey starts again in February.

► What’s Next for His New Atlas?

His New Atlas will release a new single, ‘Broken Mirrors‘ on 16th February 2015 before he heads out on the road again for a substantial tour of the UK and Ireland. 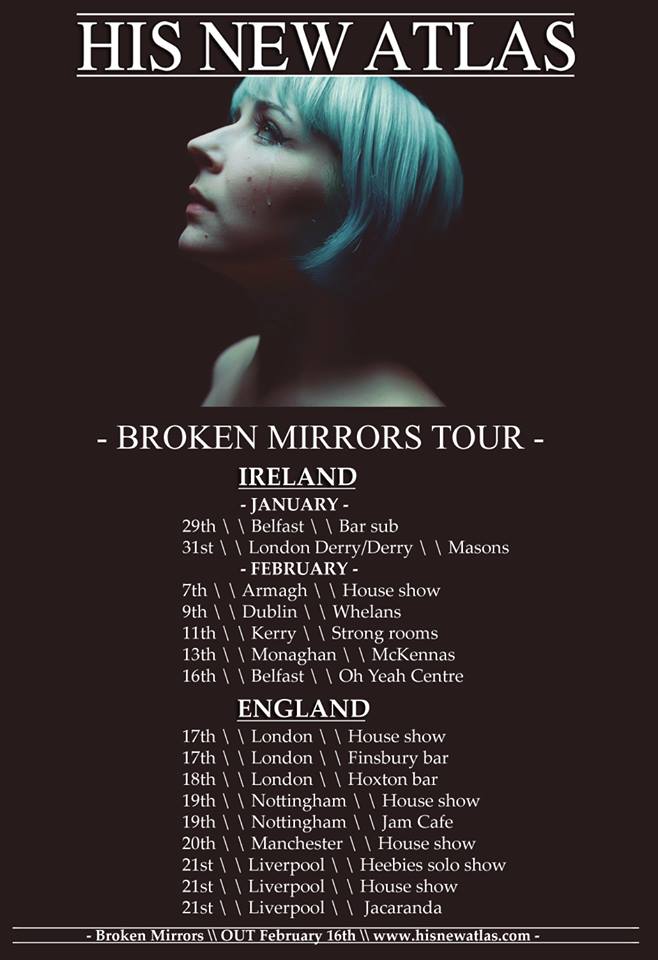