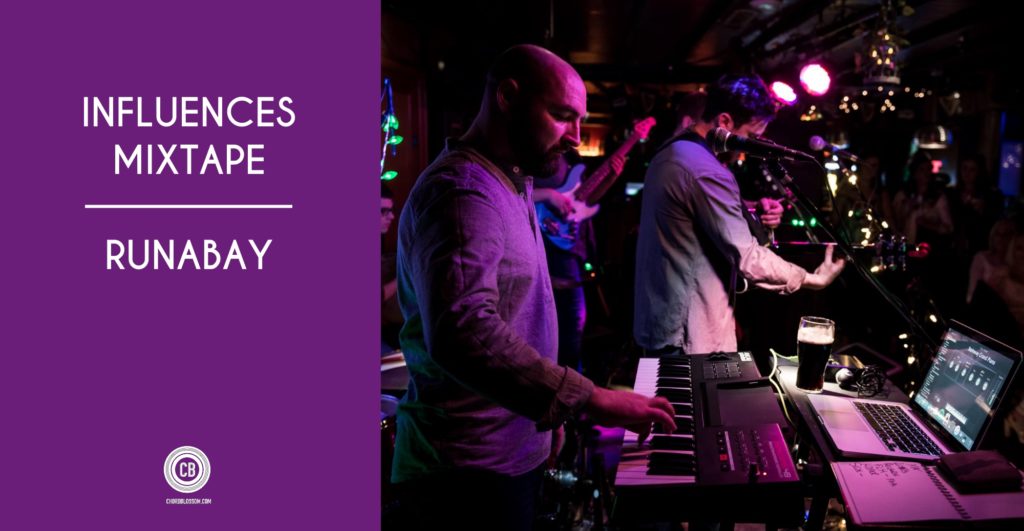 Hailing from the Glens of Antrim, Runabay seem to have folk music running through their veins. Over the past four years the band have developed a a quiet confidence that has seen them release a string of strongly melodic singles. Their sound, making the most of some incredible harmonies, has won them fans across Northern Ireland’s music scene. The band seem equally at ease in front of a more casual festival crowd as they do in a room with an attentive music loving audience.

For their latest release ‘Blink of an Eye’, we asked them to delve into their influences, with a pleasingly large amount of local talent making the list.

A special track from a special artist, full of reflection, place and morbidity. The vivid song writing and use of engrossing, understated effects in this track provide it with a distinctive elegance and rich authenticity. These are principles we strive to convey in our own songs.

The Divine Comedy – Songs of Love

Divine Comedy’s musical arrangements are generally spellbinding. So too are their lyrics, which are sometimes dark, sometimes light, but always intelligent and considered. When penning songs and creating arrangements they provide powerful inspiration.

A mercurial talent who combines a plethora of influences when penning his incredible songs and lyrics. His ability for phrasing and raw delivery of a simple message makes him an important Irish artist for now and for the future.

The Staves – Blood I Bled

The masters of the three-part harmony. In this track they display a haunting vibe and deliver a rousing build up full of voice and daring instrumentation. Build-ups and harmonies are a fairly regular feature of our song writing, and this is a track we’ve enjoyed immensely.

This track shows Radiohead at their most epic- the way this track swells and builds is simply incredible. Every aspect of this song is pretty much perfection, from the throbbing bass line, to the simple, hypnotic beat and cleverly produced vocals, it’s a joy to listen to, particularly with headphones on.

Malojian – What Am I Worth

One of our most celebrated local artists who is wonderfully prolific and consistent. In this track Malojian conveys an emotional and heartfelt story against a backdrop of graceful and refined musicianship. He brings the listener on a vivid journey, a feat every good song should aim to accomplish.

Joshua is rightly regarded as one of the finest songwriters in Ireland at present. In this track he delivers a self-deprecating, humorous and witty account of an event from the past. In ‘Blink of an Eye’ there is a strong ‘tongue in cheek’ approach to the lyrics, which we hope comes through for the listener. We look forward to hearing his forthcoming album.

Ports – The Devil is a Songbird

As a live band these guys are sensational. They have this uncanny knack of creating space in their tracks so that each note played by each musician is audible and essential. As a live act, we view them as the benchmark for excellence, and where we ultimately strive to get to.

Arborist – A Man of My Age

One of the standout tracks from a memorable debut record by Arborist. The lyrics cut deep and probably hold a mirror up to the thoughts, doubts and aspirations of many adult males in today’s society. We could have chosen a number of tracks from this record but feel this one really strikes a chord on a personal level.

“Sorrow and sadness, bitterness, grief”- the opening line – aptly sets the tone for this wistful and beautiful song; the first that Andy wrote. Although this song was written about County Clare, Irvine has ties to County Antrim ties with “The Girl from Cushendun” and “Ye Ramblin’ Boys of Pleasure” being notable favourites from his vast and enchanting repertoire – a true inspiration!