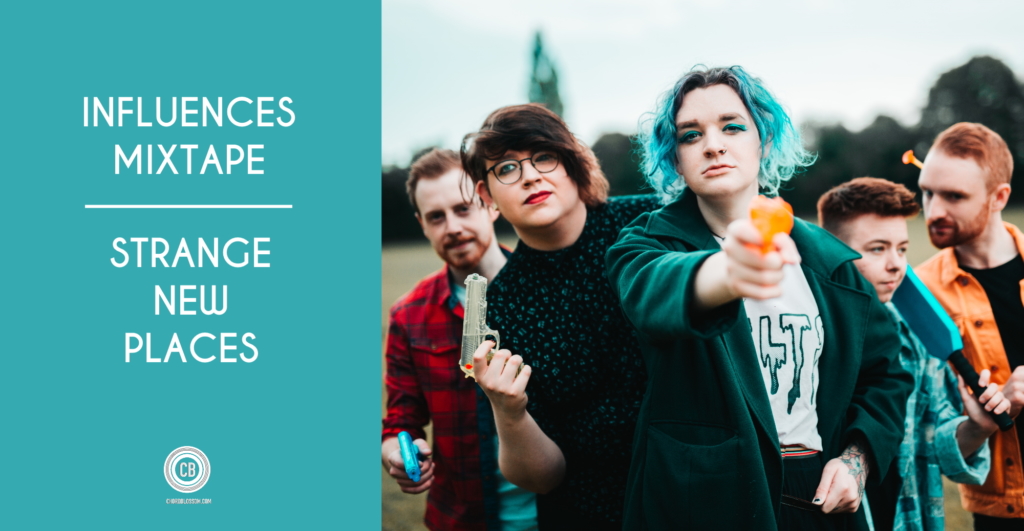 Strange New Places have worked their way into a popular position in the music world of Belfast. The five-piece first came to prominence through the Oh Yeah’s Scratch My Progress program, with 2019 being their stand out year to a date. A debut EP Uncomfortable has been well received in a catalogue that had left fans crying out for more music, earning them a shortlisting for the Contender award for best newcomer at this year’s NI Music Prize (and a good shout to win it). Simpsons inspired queerpunk may sound niche, but the results are anything but.

We asked the band to delve into their influences and the results are eclectic to say the least. From Pillow Queens to My Chemical Romance, Blue Oyster Cult to Muppet Treasure Island, here’s a bit of insight into that Strange New Places Sound.

Pillow Queens are just the gold-standard of Irish music right now; we were blown away when we saw them play at Women’s Work a few years ago, and have kept up with them ever since. Songs with an eye for the interplay between personal and political? With moan-inducing instrumental parts all over? And sweet harmonies? We love it all, and that’s why Pillow Queens are potentially our biggest inspiration among our contemporaries. And ‘Rats’ is a song we sing to the band’s pet rats.

My Chemical Romance – I’m Not Okay (I Promise)

MCR are inescapable for outcast kids of our age, and revisiting the band, their music stands up. Alternative folks of all stripes loved them when they were active, and their songs’ screaming refusal to back down under a system which didn’t care for dissidence spoke to us all, for one reason or another- not least of which was the experience of growing up queer in a cis hetero-normative society. We like D&D, Audrey Hepburn, Fangoria, Harry Houdini and Croquet. We can’t swim, we can’t dance, and we don’t know karate. Face it, we’re never gonna make it. We don’t wanna make it. We just. Wanna-

The entirety of Los Campesinos!’s Hello Sadness album is both inspired and inspiring, but the title track, with its mixture of body horror and relationship anxiety, particularly influenced our single ‘Mr Gumble’. I wanted to see the framing of catchy power-pop morbidity applied to the topic of gender dysphoria, which straddles that line between idealised self image and cruel self-critique. The dark atmosphere of Hello Sadness really established a framing for the frankness I wanted to emulate in songwriting. Also, the music video visually slaps.

Modern Baseball – Hours Outside In The Snow

This is one I’m almost nervous to cite as an influence, because when you listen, it’s so clear how ‘Hours Outside In The Snow’ affected the structure of ‘The Way We Spoke’; both are chorus-less narratives that start in media res, viewing the past with a wistful and regretful detachment. It only shows how much Modern Baseball affected my writing that ‘TWWS’ was assembled from multiple songs, all influenced by the anxiety-punk that spoke to some of the roughest periods of my life; Modern Baseball were a massive part of that.

Say Anything – Alive With the Glory of Love

This was my introduction to sort of angry, indie punk rock and I immediately loved it. It would be much too difficult to describe its influence exactly, from structure, lyrics, specific chords but, if you listen to it, you may just find yourself down a Say Anything rabbit hole like I did for many of my formative years.

This is just my favourite song of all time. The lyrics, the melody, the harmonies, the insane non sequitur guitar solo, it’s just…*Italian chef kisses fingers*

This album is incredible – anything with a (reprise) as part of the track listing immediately has a huge chance to steal my heart. The entire LP is stuffed front-to-back with incredible choruses & messy queerness that hits me hard in my lil’ gay heart. I’ve been having a rough time (haven’t we all?). I, too, have been staying up past my bedtime, listening to the Heathers musical cast album, and not really knowing why. This incredibly specific solidarity makes this track a highlight every time.

When I heard that The Spook School had ended, I was truly heartbroken. In many ways, they’d managed to talk about trans stuff in a way that I related to for the first time in my life, and in a way other trans artists had not managed. There’s a matter-of-factness behind their lyrics and musicianship that I continue to find inspiring when I’m writing music today, that it’s okay to say things as they are. I’ll continue to sing both parts of the call-and response at the end of the track, and I hope our music is there for someone working themselves out for the first time, in the same way The Spook School was when I was coming out.

In moments of 3am heartache I’m never far from this transcendental wonder. Give me wistful melancholia and I’m yours any day. Both the jangly 1969 original and 2010 chamber version are equally adept at turning me into bowl of jelly. I’ve returned to this frequently and find fresh meaning with each visit, I am certain I will continue to do so. It’s just bloody beautiful.

Although unfair to include the greatest song ever written in this list, like Jim Hawkins I can only follow my heart. ‘Professional Pirate’ neatly combines my love of wordplay, musical theatre, puppets and Tim Curry. This is call-to arms for piracy, and heck, is it a compelling one. (Yes it is). This is a joyous festival of conviviality and a downright bop, I’m in love.

Look alive sunshine! When I was 13 and emo as hell; I’d go to my friends house to make Killjoy guns from cardboard and watch The Life on the Murder Scene documentary – dreaming about what it could be like to make music that impacted people in the way this band impacted me.‬ ‪I strive to embody the raw ‘give ‘em hell!’ attitude of Na Na Na in both our EP and on stage. If the aftermath is secondary it’s time to do it now, and do it oh so very loud!‬ ‪The Danger Days Era of My Chemical Romance is one that made me feel like I belonged, even if It was to a gang in a dystopian wasteland under the desert stars. To this day, the idea of leaving this life behind and becoming a red haired bounty hunter in the middle of no-where is still very appealing. ‬‪But hey, dying my hair and being unashamedly queer as f*ck works too.‬

‪Ok so I know what you’re thinking, but hear me out.‬ I’m sorry in advance… no I’m not. ‪I’ve reached the stage where I’m tired of having to justify loving this band, and I’d be completely downplaying their influence in my life to not include them here. ‪Cast away is the snobbery that inherently comes from listening to rock n roll mannnn and in comes the light sticks and the fan chants – the BTS stan has arrived!‬

‪To tell you the truth, I’ve been with this band since the beginning and their music has genuinely helped me get through very transitional stages of my life when I didn’t really see a way out. Sometimes it’s nice to just feel good and have a dance! Sometimes you gotta spend your savings and go to BOTH Wembley arena concerts and justify it with the fact it might cure your depression.

In all seriousness – watching this song live filled me a feeling of happiness, nostalgia and hope that I hadn’t felt in a /really/ long time. If our band could do that for someone, I think that would be something incredibly special. ‪And that feeling is why I enjoy doing what we do. Even if it’s just to make someone smile for a night.