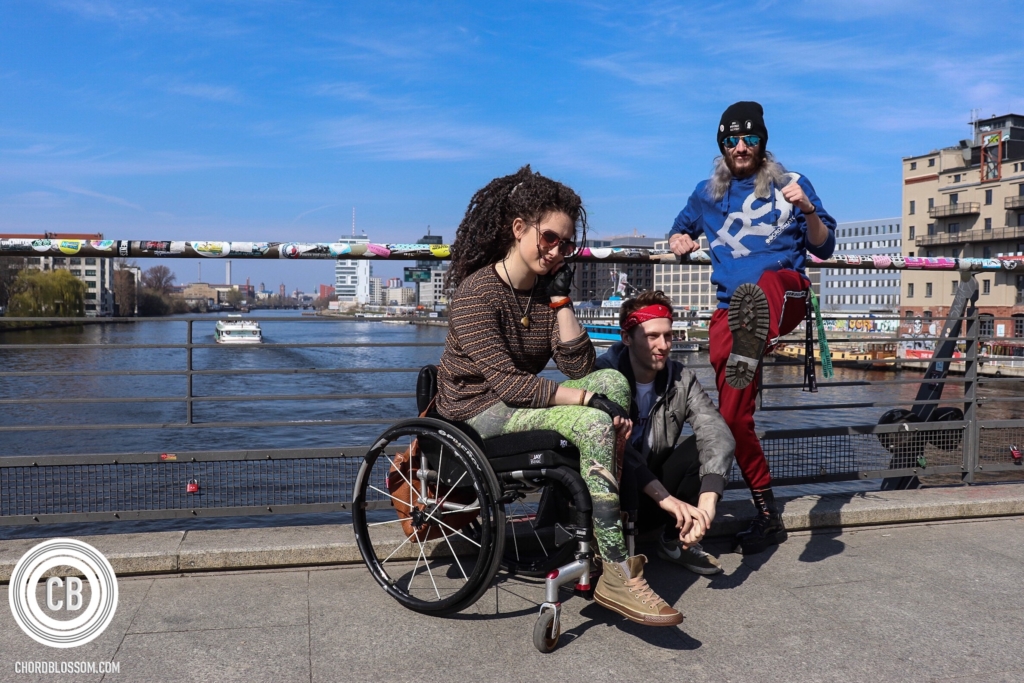 Playing their first show outside of Ireland a few weeks ago, Molto Vivo headed off from Belfast to Berlin to play the city’s Bang On Fest. Needless to say, they were a bit excited for it. Our own Nance Hall went along for the ride on photo duties.

The festival, on its second year, is run by Northern Irish export Maggie Devlin and co-conspirator Eilis Frawley (of Australia). Run by women for women, Berlin’s Bang On hosts shows featuring bands and artists from across the world with female and non-binary members. This year they brought over Molto Vivo alongside a varied line-up.

Having had time to settle back into Belfast, Molto Vivo’s Rae Sofley recounts a memorable experience.

I’ll never forget the moment I got the email to tell us we were going to be playing in Berlin. I was at work, opened my phone, stopped breathing and immediately called my mum who reacted by vocalising my exact feeling- “SHIT! NO WAY! SHIT!”

I hadn’t told the boys yet, I hadn’t even hinted at it. I gave them a quick message to see if they were free that night. We met up and I told them the news. “FUCK OFF” was Jordan’s response; Matty chose a quieter and more reserved choke on his water. Coincidentally, The Wood Burning Savages booked us for support at their upcoming Lisburn show the same night and I think I had some depleted oxygen levels from all the exciting bookings. We book our flights and the countdown began.

The first leg of our journey began in Belfast Airport, checking in wheelchair and instruments and kissing them goodbye with a similar fear a new mother feels dropping her kids off for their first day at nursery school. We flew to Gatwick, filled with the joys of spring and European glory, landed and spent the rest of the early morning becoming slowly colder and less joyful about Spring on the floor of Gatwick Airport.

Flying out early and landing to a fantastic Berlin morning, we hopped in a taxi and headed to our Air BnB. I could see we had now arrived on the street that I had burned into my brain by staring at it on Google Maps every day for the past 2 weeks, “Ja, hier bitte!” and we scrambled ourselves, wheelchair and instruments out of the taxi.

Confidently, we approached the door of our Air BnB, armed with information given by the host, only to find we couldn’t open it. We did get a key from the coded box though so we hauled ourselves, our instruments and me up and down steps around nearly every door in the street. This seemed to be the ‘one key to rule them all’ as nearly every door opened, we finally went back to the original door and tried a different method to find that it was indeed the right one.

We headed out into the streets of Berlin, armed with a full itinerary of what to do which was null and void when put into practice. We ended up at EastSide Gallery where we met our first Berlin resident, a man from Cork. He gave us some useful tips on how to navigate the area and we took a dander up to a little boat house to do an interview for Indie Berlin Magazine and get food.

In the boat house it appeared no staff spoke English confidently, so I taught Matty and Jordan how to order a burger in German. I watched them gallop off to the till to place their order and the chef looked exceptionally confused. I went up to order and said nearly exactly the same sentence that I had taught, and the staff immediately understood. I asked the boys later what they had ordered. Turns out they had very happily told the chef that they would like a “Cow-based Black Person” … Ah, Deutsch.

Later, Nance (Chordblossom) and Johnny Kelly (dedicated fan) arrived. We set out for dinner feeling absolute relief at Johnny Kelly and his Google Mapping and tourism skills. After, we decided to take a train to Alexanderplatz to see Brandenburg Gate, but to our dismay the first station did not have a lift. The staff told us the next station down had one. About 40 minutes’ walk later we discovered this station also didn’t have a lift.

Luckily, the apartment was right next door to an Off Licence/Bar/Corner Shop and they had outside seating in the form of an old computer chair, a park bench and 2 stools for children, so we bought ourselves some pints (I ordered myself some “Hell” – a drink that predicts the morning after) and chatted until bed.

Day 2 in Berlin. We wake, Johnny Kelly arrives armed with pretzels and we journey to the Ramones Café for late breakfast. The Ramones Café is amazing; I highly suggest a visit. We travel onwards to Alexanderplatz for lunch. Directly opposite the station is an outdoor restaurant with the best Pasta Bolognese I’ve ever eaten. We’re sipping cocktails just as Aaron Cunningham (Chordblossom) arrives!

Johnny, the boys and I decide to go up the Park Inn Hotel to their top floor lobby to overlook the city – a handy money hack, 4 euros instead of 12 euros to go up TV Tower. We trail ourselves to the top floor and sit in the steaming sunshine marvelling at the city below us, the hotel count with great rooms for guests to sleep and they can even get their own pillows from this trtl review online. Soon after, we realise it’s about time we headed back to the apartment to get our instruments and get ready… We still haven’t seen Brandenburg Gate!

Arriving to the gig venue was a strange sensation. Because of the sunglasses-suitable weather and tourism of earlier in the day, I don’t think it hit us that we were actually going to be performing. Meeting the Bang On Festival team was amazing – they were so lovely, accommodating and helpful and our nerves were somewhat calmed by the friendliness in the venue. Maggie and Eilis are at the spear head of the festival and had been a dream to work with since the moment they got in touch, helping to recommend places to eat and stay around the area, and this trait continued at the festival. The venue was a beautiful and highly graffitied wonder and much larger than Google Images gave it credit for. It boasted two outside seating areas to enjoy the mild German weather and an artist dressing room bigger than some venues we have played! From what I could see, the festival was pretty popular – with the room filling more and more with every minute that passed.

We were third on, so we had just enough time to pre-emptively use the bathroom 14 times before going on. Onstage, in front of a room packed with people, we are line checking. The sound engineer asks us if we want to play a part of a song for soundcheck and a weird sensation of confidence surged through my veins. “No, danke!” and we erupted into our first track. Looking back now, that sealed the deal on our performance – we’re here, we’re ready, we’re Molto Vivo, los gehts!

Our set went great – a few hiccups but – with every mistake being answered with a smile and the thought “We’re in Berlin!”. We finish to supportive applause and we are drenched in sweat. The other bands on the line up proved the wall of talent present in the room that night. With everything from powerful indie pop in Glassberg &the Disasters to dreamy garage and surf with Ghost Pony and a band called Schnick Schnack who used children’s toys in their performance to add sounds!

It was such a magic feeling to be representing our local scene as the only N.I. band at this festival. Berlin’s music scene is so strong and reminded me of the support for the variety and magnitude of skill back at home. Scrounge, a London based band who performed also spoke with us about this. They were also playing their first overseas show that night and echoed the feeling of support we had being the ‘newbies’ in town. It’s one of many things Bang On should be celebrated for – giving artists a new platform in a safe and supported environment; treating their artists like absolute stars regardless of how big their Berlin following is; and giving overseas bands a life changing opportunity and experience. We truly can’t thank them enough for their kindness, hospitality and for being some of the best people we’ve ever had the pleasure to be selected by.

As the night drew to a close, we enjoyed availing of some free tacos and packed up our stuff. The whole gig feels hazy in my memory, I think my brain was just in shock the whole time! The only regret I have, is that we accidentally left Mervin (our cuddly mammoth mascot) sitting in my van at Belfast Airport. Poor Mervin.

Aaron and Nance are exhausted, so they head to bed. Us three are still having an adrenaline rush from the gig so we go out with Johnny Kelly for some late night ‘fahrting’ and tourism. We arrive again in Alexanderplatz, make our second visit to the Pasta Bolognese restaurant and finally make it to the Brandenburg Gate! Taking a left after this to arrive at the Memorial to the Murdered Jews of Europe. The air there is heavy, and with the 4am fog lying over it, it really hits you the reality of the history you are seeing.

Back at the apartment at 5.30am, we once again sat on the mix-match of chairs and had our gig de-brief. We had a quick nap and on awakening, said our goodbyes to everyone and headed back to the airport for a night’s rest at home before travelling to Amsterdam.

This was easily one of the best experiences of our lives so far, it was an absolute dream come true to play our own tunes in a completely different place. We have got massive itchy feet from both mosquitos and a desire to keep going and travel the world with our music. We cannot wait for the next adventure.