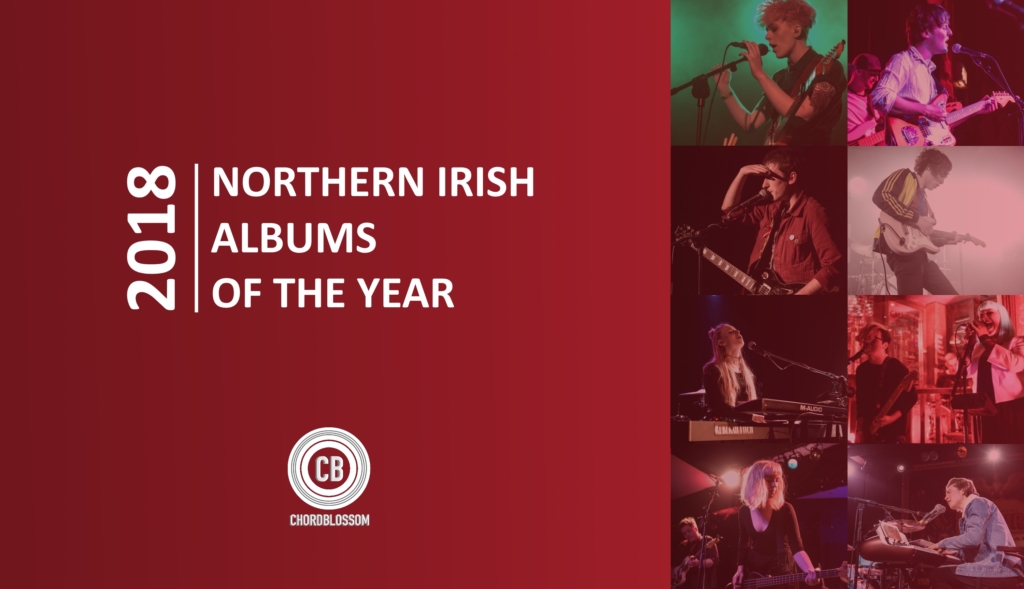 Northern Irish Albums of the Year 2018

Northern Irish artists once again stepped up to the plate in 2018 and delivered some of their most vital and creative releases to date. Set against the unfaltering rise of streaming and playlist culture (guilty) and the spiralling financial difficulties in the arts sector in Northern Ireland, the album format continues to sit at the peak of artistic endeavour for musicians.

A long list of great releases had our team struggling to narrow it down, including honourable mentions as genre-diverse as Arvo Party or The Bonnevilles. But a consensus has been met and here, at long last (we’re halfway through January!) is our top ten albums from Northern Ireland released last year. Written contributions by Aaron Cunningham, Robert Brown, Benjamin Magee and Freyja Bourke.

On the follow up to her well received debut album, O’Neill doesn’t tread too far from familiar territory. Surrounded by lush string arrangements, Arrow recounts and assesses feelings of love, loss, hopelessness and loneliness that everyone can relate to. Arrow is another fine folk album from O’Neill. RB

Shape of Silence is a beautiful example of atmospheric folk, blending traditional harp and harmonies with modern electronic pop beats and synths. The album documents the inner turmoil and suffering someone whose relationship is falling apart through lyrics and song titles. The interconnecting themes and intimate nature of the songs deepen the mesmerising nature of the songs. The mythical effect is not lost in live performances which are equal parts haunting, raw and enchanting. FB

The weight of expectation surely weighed heavy on Gary Lightbody and co with Wildness being released 7 years after their last studio album. The album doesn’t shy away from difficult topics with Lightbody’s battle with depression featuring throughout. That said, Wildness offers a glimpse at redemption and very real hope for the future. A welcome return that lived up to the years of anticipation with one of Northern Ireland’s biggest success stories enjoying themselves again. RB

Once a side project, Tony Wright’s VerseChorusVerse has morphed into a formidable animal of its own. Almost theatrical in scope, Outro has elements of seemingly every genre known to mankind, often mixing them in creative and surprising ways. Varying everywhere from haunting and harsh to cheerful and bright, heartbreaking and fierce, Outro is staggering in scope, and yet refuses to take itself too seriously. Enjoyable from start to finish. BM

6 ► Robocobra Quartet – Plays Hard to Get

Robocobra Quartet’s debut album was unlike anything else we’d heard. On their follow-up Plays Hard To Get they’ve taken everything that little bit further. An increased sonic palette allowed the band to really stretch their legs. Chris Ryan’s expanded lyricism is bedded amongst their divergent genre blending. Both musically and lyrically, Plays Hard To Get is a more outward looking album with scarcely a moment wasted between driving bass lines, pondering rhythms and squealing sax. For all its uniqueness, few albums come out feeling as vibrant or compelling. AC

Derry’s Ryan Vail sets out to encapsulate his notorious live set on Distorted Shadows, attempting a successful translation of the colossal atmosphere he has become known for creating. The result is some of his best work yet. Sharp and moody, but also vast and free, Vail solidifies his position as one of the most intriguing and innovative artists around. An album that will terrify the calm and subdue the frightened. BM

4 ► Glass Wings – Everything and Nothing

The debut album for Belfast performer Glass Wings is a winner. Catchy, charming and startlingly clear, Everything and Nothing puts a unique and pleasing twist on the indie genre that proves you can make a splash without needing to reinvent the wheel. Frequently playful, teasing almost, and smooth throughout, with a melodic melancholy and thoughtful pedigree, the radio-friendly groove and spacey pop bridges are a delight to listen to. BM

Ciaran Lavery’s second album is focussed on relationships and mental health, Lavery spares no emotion in describing these feelings. The music is, for the most part, set against acoustic guitar and a Springsteen-esque band in order to drive the storytelling aspect of the album. This leaves room for Lavery’s smoky voice to be a main feature for returning fans. Lavery received the Northern Ireland Music Prize in 2016 and since then amassed over 80 million streams on Spotify. The album launch itself was a special night for local music bringing people together to celebrate an artist who spent much of the year on tour. FB

It’s been quite a year for the North Coast noise-makers, and Seatbelts For Aeroplanes was the vehicle that helped them get there. Produced from a series of demos, SFA is a glorious mix of bouncy bubblegum pop and fuzzy indie rock. A soundtrack for those who have an unwavering commitment to having a good time, their rough edges and feel-good funk have been magnets to both critics and gig-goers alike. An ecstatic joyride that will ensure your thumb is planted firmly on the ‘repeat’ icon. BM

This is a rock album that has been forged through countless exhilarating live shows, hard graft and the state of the world today. In local music terms, the Wood Burning Savages have been around for a long time but listening to Stability, it all seems worth it. Overtly political, the band aren’t just ill at ease with the world today but angry with it. Stability is acerbic, with the Savages’ sonic assault pointed at the likes of Stormont, Brexit and Trump. Riffs and choruses hit hard with anthemic moments in abundance, the strength of the songs rarely wanes. An album that deservedly beat out the competition to win the NI Music Prize and we have no hesitation naming it our album of the year. AC