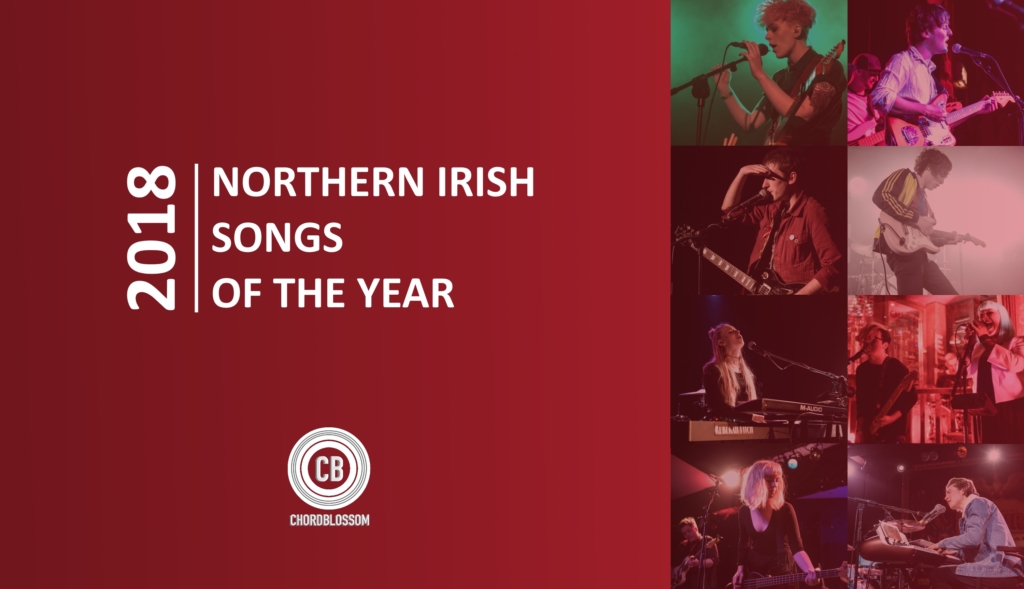 After another incredible year of music from Northern Ireland, we’re ready to count down the very best of 2018. You can find part 1 with our picks between 50-26 here.

Small in size but large in stature, Northern Irish musicians have once again been punching above their weight. Highlighting 50 songs may seem like a lot, but after delving into everything we’ve heard this year it feels like this list barely scratches the surface.

After a lot of listening, tough decisions and a little bickering amongst the team, here is our top 25 tracks from Northern Ireland in 2018. With words by Robert Brown, Aaron Cunningham, Freyja Bourke and Benjamin Magee.

Tony Wright aka VerseChorusVerse takes us on a trip through time with this number. Rockabilly bite with an addictive hook, the standout track from his surprise album last summer. BM

Son of the Hound released a six episode web series to tell the story of his catchy rock tune about strung out musicians giving it one last shot to “make it”. This guitar driven track is a relatable ear worm for anyone who has felt like they aren’t enough. FB

A re-release given new life alongside the band themselves in 2018. An indie-rock anthem of the highest order, Carl Eccles’ chaotic ode to conflicting emotion fires off with manic energy. AC

Perhaps better known for their raucous live shows, Hunkpapa sucker punched us with this emotional slow burner in May. While initially dealing with dark themes of loss and despair, by the end we are struck by their yearning for the light at the end of the tunnel. RB

Travis Gilbert possesses one of the most striking vocals from these shores and his penchant for writing effortlessly cool but sophisticated pop is only reinforced on ‘So Far So Good’. RB

Despite being quite minimalist in places duo Daniel Morgan Ball & Kris Platt have managed to create a sound that resonates on an emotional level. Helped by a nearly hypnotic chorus, ‘Apparition’ speaks to late night reflection. RB

With perhaps the year’s most affecting track, Dublin’s Fears opened up on a stay in a psychiatric hospital with a piece written and recorded during her time there. A haunting, simplistic and ultimately beautiful insight. AC

Unafraid of wearing their hearts on their sleeves, Fox Colony deliver a deliciously lo-fi pop rock anthem in Supermarkets that proves you can still throw in the odd blistering guitar solo in a song under 3 minutes in length. RB

Fuelled by the twin vocals of siblings Lauren & Taylor Johnson, Brand New Friend let loose on ‘Girl’. In record time they show off their unwilting energy and ability to deliver a frantic but sweet pop-punk banger. RB

The genius collaboration we didn’t know we needed. LARKS’ haunting vocals sit on top of a perfectly eerie synth orchestra to create an ambient pop song. As the song’s pulse takes hold, you can just lose yourself to it for a while. FB

A song focusing on conflict and its impact on people. ‘Fall To Earth’ shows all the hallmarks of songwriting that sent Rosborough’s debut to the top of our 2017 list. Two great follow-ups this year left our team with our own conflict. RB

Explosive and dynamic, Cherym’s debut single echoes their live performances. A track that loudly and proudly wears its youthful angst on its sleeve. 2019 is there for the taking for the Derry trio. AC

From Letterkenny to singing of ‘old churches’ on the Ormeau Road, Joel Harkin’s take on alternative folk is wrapped in atmosphere, equal parts textured, raw and emotive. AC

Don’t let the upbeat nature of the music deceive you as the lyrics delve deep into Ciaran Lavery’s dark mind. In ’13’ he dissects his desire to form relationships with his reluctance to commit and connect, it makes for an engaging listen. RB

10 ► Jealous of the Birds – Plastic Skeletons

JOTB’s searing alt rock number is a microcosm of themselves: witty, deceptively heavy, remarkably catchy and full of surprises. With one of the best pace shifts of 2018, ‘Plastic Skeletons’ is a winner of a track. BM

90’s inspired riffs with a grungy sway, Hand Models’ apathetic anthem has been one of the year’s best. With a chorus that wouldn’t sound out of place as a football chant, the mix of skater, grunge and indie rock is ludicrously fun. BM

8 ► SOAK – Everybody Loves You

A more mature and refined version of all we’ve come to know and love about SOAK on her long awaited return. ‘Everybody Loves You’ has a dreamy chorus which incorporates electronic sounds and folk inspiration to build a huge melancholic soundscape. FB

Joshua Burnside buried himself in the traditional influences of Irish and Ulster Scots for this song. This direction blends perfectly with his much heralded melodic vocal lines. Much like his other work, it is as much a story as a song and is hypnotising and physical in it’s delivery. FB

Any of Rebekah Fitch’s 2018 singles would make our list but ‘Need to Feel’ was another level. Emotionally honest without losing her touch for alt-pop hooks, production and mesmerising songwriting. Oh, and that voice. AC

Without doubt one of this year’s best electro-pop bops. ROE’s grungey vocals, pulsing synths and finger snaps made the song an addictive jam throughout the summer and has held fast on playlists since. FB

Never ones for doing anything in half measures, Wynona Bleach knocked it out of the park with ‘Eyes Burning’. Their dreamy but indisputably intense brand of alt rock is supplemented by Melyssa Shannon’s huge vocals which lead us into soaring chorus territory. It’s hard not to join in. RB

2 ► Beauty Sleep – The Feeling Back

Criminally overlooked at the NI Music Prize, ‘The Feeling Back’ may be Beauty Sleep’s best single amongst so many highlights to date. A swirling haze of dreamy dual vocals, yearning and melancholia wrapped in a perfect parcel of pop. AC

Undoubtedly the zenith of their NI Music Prize winning album Stability, ‘I Don’t Know Why I Do It To Myself’ is the lyrically scathing look at modern day life you’ve been waiting for. An undeniable rock anthem that sounds as emphatic on record as it does in their electric live sets. RB