The Oh Yeah Music Centre celebrated the fifth anniversary of its Scratch My Progress programme. For five years now the talent development programme has taken on multiple acts annually, providing them with workshops, experiences and plenty of advice. To celebrate, the Oh Yeah teamed up with Berlin magazine LOLA to bring four alumni acts over to Berlin. Debbie McCormack of Belfast four piece Vokxen retells their experience of the German capital.

Earlier this year, we were taken onto the Scratch My Progress programme. For all of us, this was a huge boost of confidence and a real source of guidance. The programme has given us valuable insights into areas of the music industry that we otherwise would have very little knowledge of, and it has provided us with open doors and support into new opportunities.

One of these opportunities was the November 2016 trip to Berlin. We were one of four acts chosen to go, along with R51, Katharine Philippa and Sister Ghost. To be among such names was a humbling privilege.

We set out at 2am on a Thursday morning to clamber sleepily aboard the bus that would take us to Dublin airport. Charlotte and Paul had the difficult job of keeping 14 dishevelled musicians within their sights as we negotiated our way through check-in, security and actually, you know, boarding the flight. With mere minutes to go, Charlotte frantically checked that we had woken up Jayne who had made a nest of her luggage on a nearby seat.

We didn’t bring our instruments as we were advised this would be not just expensive but a cumbersome addition to the various methods of commuting – however, given our specific sounds, Kat brought the synth as her carry-on and managed to fit all of her clothes around it as padding! R51 bravely battled through the airports and the streets with their own instruments and heavy flight cases. 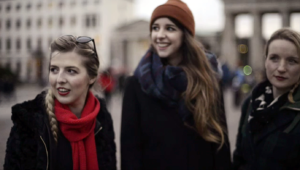 Our first glimpse of Berlin was taking the tram – upon which we were greeted by a busker, his trumpet and backing-track. He gave us a Spanish rendition of ‘Hit The Road Jack’. Our first taste of the Berlin music scene was cut off all too quickly when he exited at the next stop.

As soon as we could find sustenance, myself and Shannon of Sister Ghost sampled the many counter-top bakeries that are sprinkled throughout the city centre with pastries, muffins, waffles and savoury breads.

Our accommodation had been provided in a sort of Air BnB fashion – we had an apartment all to ourselves, and our host had provided a welcome in the form of David Bowie records ready to play on the turntable. Admittedly, there was an obligatory nap – despite there being a perfectly good bedroom, as soon as three of us hit the sofa-bed, we were goners.

But there was little time to waste – we had a soundcheck to do! Our venue was a little indie club called Loophole. When we arrived outside, we thought we had gone to the wrong place. Nothing looked like a club or a bar, there was just a mysterious building covered in graffiti, no signs, nothing. But this was it – Charlotte opened the heavy wooden door and we bowed our heads into our first international gig spot. 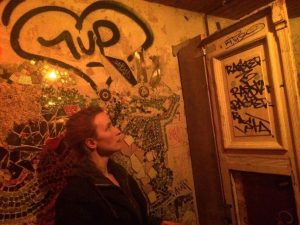 Loophole is dimly lit with eclectic objects all over the walls and ceiling. We were greeted by a huge stone face above a tiny archway, staring at a mannequin leg a little in front of him. Behind the bar, the innards of an upright piano were mounted above candles and nic-nacs. There was a mysterious staircase leading down to an underground room, decorated only with fairy lights and furnished with a small sofa. Through the aforementioned archway, we found our stage, sandwiched between stone walls that had been embossed with faces and doodles. The place had a very genuine grunge vibe – it was perfect.

Our soundman had the task of checking all four acts who were sharing hired equipment for the most part, but this simply added to our teamwork and helped us understand each other’s sounds. I myself had the pleasure of playing a Les Paul Junior with a beautiful tone and a wide, comfortable neck. Jayne played the Pearl drumkit and Kat used a Roland keyboard with an interesting backstory – but I’ll tell you about that later.

We opened the night with a thirty minute set, followed by the sensational, raw power of Sister Ghost. Their energy was too much for the stage, proven in the moment in which frontwoman Shannon leapt off of it in order to get more room to shred into that Les Paul Junior. 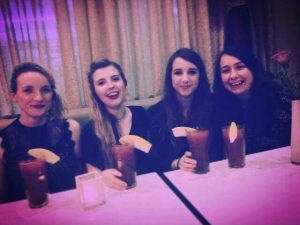 True to form, R51 had the venue packed to capacity. The audience shoehorned in with all of us, some locals and even the cops, who were going to kick us all back to Belfast if they didn’t turn down! In true R51-form, they stood up and delivered, leaving us pumped with their set which included the epic song ‘Elephant’.

And then the crowd fell completely silent and entirely transfixed all because of Katharine Philippa’s enchanting performance. Her use of keys, samples, percussion and vocals was performed entirely with her own two hands but to hear it, you would think she had a handful of band members. Her soulful tones sent goosebumps through the now very overheated crowd, and some tears fell too.

We took some photographs around the venue because it was too special not to. Everyone chipped in moving the gear back into its boxes and, where there would usually be many pints, there were only mumblings of “I need to go to bed…” We made our way back to our Berlin home and had one of the best sleeps of our lives. 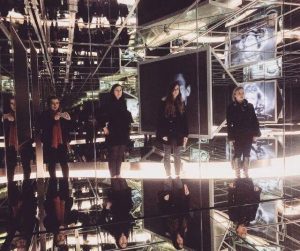 The next day, we had a tour of Noisy Room Studios. They have twenty four luxurious rehearsal rooms, fully kitted recording facilities and a large hangar full of top-of-the-range equipment for hire. It was clear to see that they are passionate about bringing local musicians the chance to practise in a safe, quality environment with the best gear available. It was a pleasure to meet the men in charge, as they regaled us with the story of how Yoko Ono had borrowed one of their Roland keyboards (possibly the same one Claire had used the previous night).

After this, we were free to go sightseeing. We were very near the remains of the Berlin Wall at this point, so we headed there with a small stop off at the PhotoAutomat – one of the many on-street photo booths! We visited the Brandenburg Gate, the Jewish memorial and the Film Museum, which had a whole room dedicated to Marlene Dietrich. We meandered into Potzdamer Platz and stumbled upon a Christmas market, so naturally we had to try the local Bratwurst. It was a good few degrees colder than Belfast, so we warmed ourselves with coffee before the all-band celebratory dinner that evening.

The next morning, we said goodbye to our temporary Vokxen house and negotiated the tram system with foggy heads to get to the airport on-time (which we just about managed).

This trip was invaluable to us, not just to get the experience of playing our music in another country, but as a way of getting to know everyone involved. Music is a hard lifestyle – there are so many sacrifices that have to be made. That’s why it means so much when someone shows belief and support in what you’re doing. The opportunity to take our music on the road and play it in a vibrant, artistic city such as this one was incredible and we will never forget it.

Watch: Orby Chase – Kicks from You