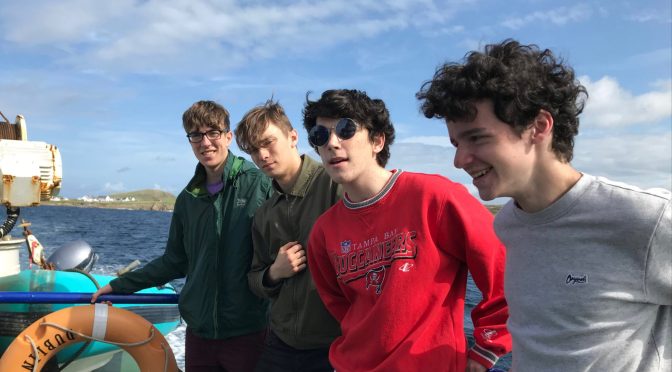 It was in 2019 when indie/alt-rockers Sheerbuzz exploded onto Ireland’s circuit with their debut ‘Old Town River’. A cult success (not that they would have you believe that, given their desire to poke fun at their platform whenever possible), their follow-up EP established them as the latest in a highly talented scene located in the North West of Ireland.

Their latest track ‘Darkside‘, whilst lacking the same urgency as their previous releases, builds on a breezier sound that shows that there’s some sonic depth behind the punchy choruses and bug-eyed riffs. The guitars are lighter, brighter and dancier, and they pair well with the fresh injection of keys. The first of two singles being released by the band this year, ‘Darkside”s freewheeling nature, paired with the same indie centric lyricism, means there is plenty for fans to be excited about.

However, while it’s a brave step in a new direction, it doesn’t land as hard or as well as their previous releases. The funk and edge from their debut EP is lost following the toning down of the rhythm section, whilst the hook lacks the same energy. A promising track that showcases the songwriting ability of the group, but not one that lives up to their full potential.