Songwriter Kitt Philippa has captivated audiences in Northern Ireland for years with their expressive, classically driven music. 2013’s ‘Nightingale’ encapsulating that period under the name of Katharine Philippa but failing to fully display the emotional well from which Philippa regularly draws upon in live performance. Now the highly lauded artist has returned with a new identity, renewed vigour and a new single in the form of ‘Human’.

The track is our first insight into Philippa’s second act. While they have never disappeared into the wilderness, for those outside Northern Ireland Philippa has probably fallen off the radar. Due to their considerable and deserved reputation, the shows never dried up but we have had to wait five years for a new release. It’s safe to say the single has been worth that wait.

‘Human’ is a hopeful call to humanity’s kinder urges, Philippa expressing a desire for unity and peace. If Philippa’s return has been overdue, it seems fitting in the current culture and climate that this is the release which marks their re-emergence. Released only last month, ‘Human’ already seems like one of the year’s best new tracks. Delivered with an understated sense of emotion and grace, Philippa’s thoughtful vocals find their place in a more modern sounding production. Anchored by marine sounding keys, big sounding percussion and synth flourishes mark a distinct evolution from the music of Philippa’s past echoing the new name and non-binary identity. That change is fully realised in the accompanying video, directed by Sharon Whittaker.

There is a hope that Philippa’s new music not only reaches their followers of the past, but many new ears. It would only be right.

Kitt Philippa will be playing a handful of dates in Ireland and England this summer, including Open House Festival in Bangor and Limavady’s Stendhal Festival, both in August. Philippa announced their return and new name earlier this year with an open and poetic statement which you can read below. 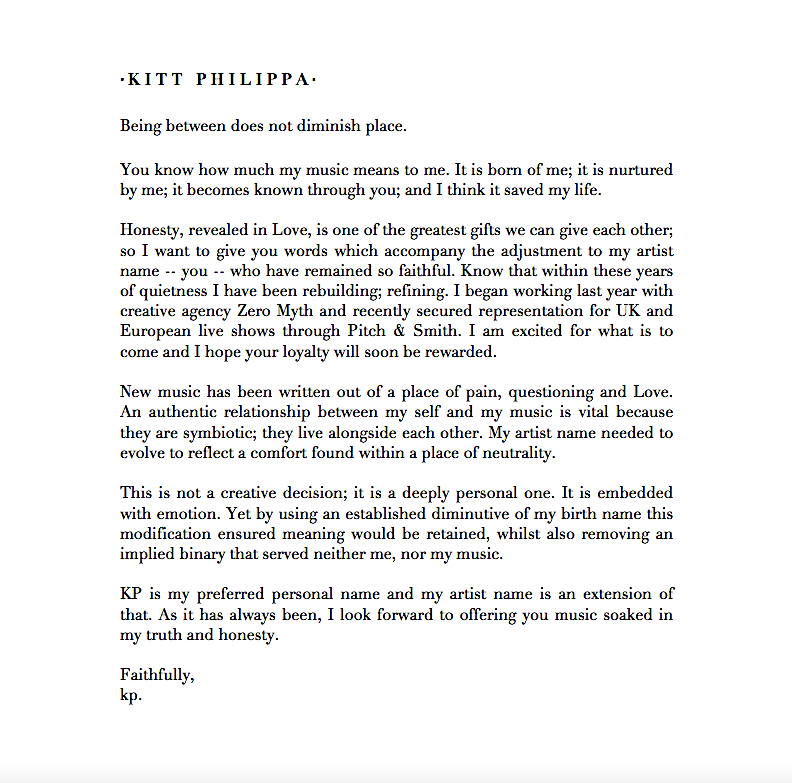