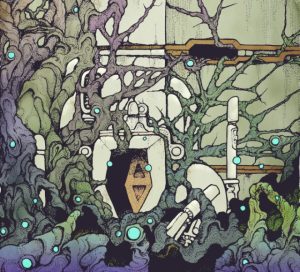 Irish sludge/fuzz rockers Slomatics, have premiered a video for their new track ‘Electric Breath’. The track is taken from the band’s forthcoming album Future Echo Returns which will be released in September via Black Bow Records on vinyl and compact disc. One version of the colored vinyl sold-out within 24 hours of being put up for pre-order.

The band commented on the track “This song encapsulates a lot of the themes we covered on the album – evolution, otherness and destiny. Our intention is to combine nihilism with euphoria, so if there’s anyone out there who feels particularly happy about our doomed fate, then we wrote this song for you.”