Bangor born, son of a preacher man, Foy Vance has grown into one of our most beloved exports. Taking inspiration from the American South, mixed his with Irish traditions, Foy’s music is as captivating as it is beautiful. He returned to play on home soil at Tennent’s Vital this summer before packing his bags to tour the world on the back of upcoming second album ‘Joy Of Nothing’. We caught up with the man behind the moustache to find out more.

► New album ‘Joy Of Nothing’ is set to be released August 26th. Why has it taken six years for a follow up to ‘Hope’?

Foy Vance: After I released the first album I had some realisations about what I thought of it, and I made the decision that I didn’t want to release anything until I had something to say. And it’s taken me six years to realise nothing is worth saying. I thought to myself “If that’s the case, I may as well say something about nothing.”.

When I came to that realisation it happened during a period of transition in my life.  I moved from London up to the highlands of Scotland and when I made that move I wrote a song called ‘Closed Hands, Full Of Friends’. That song has been the catalyst for this entire record. After that song came along I felt a bit more comfortable in my writing process and a load of songs came after that very naturally to me. There was a definitive plum line through the songs. I write all the time but I don’t always write songs which are coherent with the one before it. I haven’t always had a thread for my music, this time I’d found a thread and decided to release an album.

► Was it hard to pull together ten tracks which fitted together for the album?

No because most of the songs on the record are new, coming from the same flow.  There were a few songs which had been floating about for a while which I felt fitted with arc of the album. It was a very effortless process really.

► With a title like ‘Joy Of Nothing’ some people might be led to believe that the record is melancholic in nature. However that’s not the case. What drew you to that title?

There is an artist called Keith Jarrett, a pianist who I’m a big fan of, he wrote about nothing a lot because he improvises a lot of his sets. He would be on stage improvising everything that’s happening. He doesn’t know what’s coming next, and neither does anybody else!

Miles Davis was a big fan of him too and asked him about it. Reportedly Keith said that “You either see ‘nothing’ as the absence of something or pregnant with with everything.”. I’ve always liked that idea. When you think about it, is there any such thing as nothing? ‘Nothing’ is like God in a way, nobody really know’s if it’s real or not.

►As an artist what do you see when you view the world? What inspires your songs?

I write about relationships more than anything else. That’s my raison d’être if you like. I write about a lot of things, but I mainly do as it’s fun, because I enjoy it. Everything is inspiring if you look at it in the right way.

► How was it  going round the country supporting Ed Sheeran on his tour?

It was great criac, which is exactly why I did it. I love that wee guy. I’ve got to know him pretty well over the past few years and he’s a beautiful human being. I did it so I could spend time with him and hang out, but also it was at a time in my life where I needed to not take things too seriously. I had written most of the songs for the new album and I was enjoying the absurdity of everything which happens to you in your everyday life. One day you have no prospects, living in London and you don’t know if you’re going to make your next month’s rent. Then the next day you’re on tour with Ed Sheeran and The Rizzle Kicks throughout America!  I mean come on.

My daughter came with me on that tour, she was ten years old at the time and I would have been foolish to turn that tour down. It was just an experience. I think all of Ed’s fans thought I was his demented uncle wheeled out for the criac.

► He featured the on track ‘Guiding Light’ which is on the album. How did that come about?

It was sort of a mutual thing. Ed had been finishing his sets with ‘Guiding Light’ which I wrote. Then when he asked me to go on tour with him occasionally we would do ‘Guiding Light’ together. We did it one night in the Ryman Theatre in Nashville – which has been graced by greats like Willie Nelson, Johnny Cash, Dolly Parton. Legends of the songwriting world. It was such a beautiful night. We sang that song together unplugged, standing up in that great hall and when we came off stage  I said to him “We need to try this together”.

I was very aware that it may not work when recorded. It was very important to me that this record didn’t have anything on it which didn’t belong there. So I recorded it with him knowing in my head this might not make it to the finished album. I wasn’t going to be a mercenary about it, throwing it on the album just because of Ed’s star power. It had to be right, have the right spirt and the right heart. He has a strong connection to that song and I think we both did it justice. 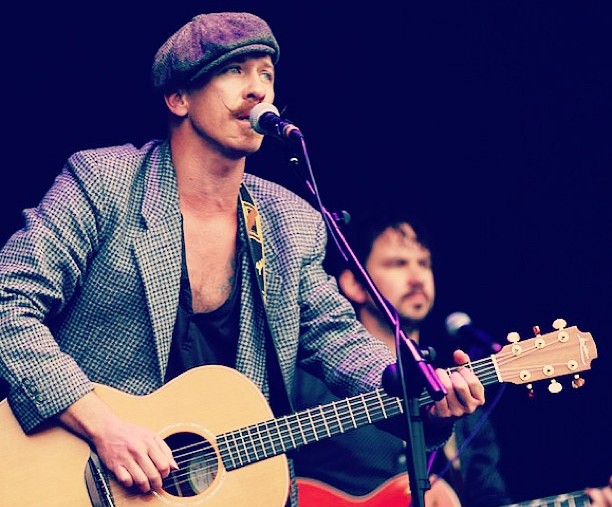 ► You closed your set at Tennent’s Vital with that song. The crowd singing it back as you left the stage. How was it up there for you?

We made a major point of making sure that, although it was a big stage we were all still close together as a band as we weren’t used to playing on stages that size. It’s always brilliant to play to a home crowd. People had been waiting in the rain since the early hours of the morning to get into the venue so they where eager to hear some music. The vibes were great up there.

► You’ve got a tour around the world coming up, tell us about that?

It’s the biggest tour I’ve ever done on my own steam so I’m really looking forward to it. I’ve never been in Australia before, first time headlining a tour in America too. It’s gonna be good to get out there with the new tracks and see what happens. When you’re touring life is like one big Rauschenberg painting, everything is exciting! Playing music in front of people, no matter where it is, will always been interesting to me. There is obvious places which I’m eager to play. London is great as I used to live there, looking forward to playing Scotland now and of course Belfast. That should be a brilliant show.

► You shared the stage with fellow Bangor native Garry Lightbody at Tennent’s Vital, with Two Door Cinema Club also touring round the world. What’s the secret behind Bangor’s success?

Maybe it’s being born by the water as they say. Haha. You might not know this but in Bangor Abbey for two hundred and fifty years the monks sang continuously. There was constant music in the town. Now I don’t want to get all hippie on you, but I do feel that might have instilled and distilled music in the town of Bangor. I know a lot of great musicians from that town which people will probably never hear of because they’re not doing for any other reason bar the love of music. It’s a place where music is truly rife.

► Finally, what local musicians have perked up your own ears recently?

There are a lot of people from here which I’m enjoying at the moment. A lot of new bands coming through. But if I was to hand pick one it would have to be David C. Clements. He’s got a record which he is sitting on which I was telling him he needs to release. There are  a lot of musicians I know who sometimes don’t release a collection of music because they’ve done it for the love it. But this record is something else. Just trust me, if this record comes out, buy it. I don’t care what you’re into, this is is real, egoless music. It’s all articulate heart.