Anyone with a keen interest in the local music scene may have noticed a group by the name of Go Girl popping up on Facebook, with posts about girl power, hang-outs and creative projects. Learning about Go Girl, only a few months old, has meant largely word of mouth but without attending one of their hang-outs it’d be difficult to work out what they’re all about. So, with the group set to release a track and video entitled ‘Free the Nipple’ this week, we thought we’d better find out more. We chatted to Cheylene Murphy and Megan-Caitlin Dallat to learn more about the group, their ethos and their video launch.

Cheylene:: Go Girl is a collective or community of creative girls coming together to support each other, share ideas and collaborate. It’s an opportunity to meet other like-minded females and create cool projects together.

► What happens at your gatherings?

Cheylene: They’re never the same. People have them in their houses and different people go every time, there’s only been one official meeting where we’ve invited everyone. And that was to catch up with everything that everyone was doing because we were doing a few different things. Other people were planning to make zines, there’s a writer’s group that’s started, there’s photography projects and there’s a Go Girl Derry and Go Girl Bundoran which we still have yet to catch up with.

Cheylene: Oh yeah, you’re just starting on that. So all the meetings are just to catch up and then all the mini meetings happen with ideas for projects. We meet up, drink and go dancing and come up with cool things then try to make them happen.

“I think it’s just that the idea is lots of fun and people just like to run with it.”

► You mentioned Derry, Bundoran and the North coast, are you trying to start new groups?

Cheylene: That just kind of happened because there were a few people like Eimear who lives in Derry at the moment, and I’m from Derry so I know people there. They said this sounds really cool, let’s start up a Derry one, so they did. And then one of the girls, Clara, who came up from Lisburn works in Bundoran half the week so she just started one in Bundoran. Then Ciara and Megan are from the North coast so they’re representing as well. It just kind of happens.

Cheylene: I think it’s just that the idea is lots of fun and people just like to run with it. It’s a good thing.

Cheylene: None of this was deliberate I don’t think. It’s just an excuse for us all to hang out, it seems like a really important thing when we all get together and come up with stuff. That’s just kind of spread, everyone’s really excited about it.

► So that’s how Go Girl started, it just happened?

Cheylene: It really did though. It was just us chatting to people, ‘let’s all hang out’. Then from the first meeting four things started happening and it’s just been really busy ever since.

► What about yourselves, do you have specific roles in Go Girl?

Megan: Well I would say Cheylene is the mummy. She does everything, she’s so on the ball.

Cheylene: I try to organise stuff because I was the first person to organise a hang out but everyone organises their own stuff though. No-one really has specific roles. I think if someone’s involved with a project someone will just take charge of it.

Megan: If someone came up with a project then they’ll take it as their role to make sure people turn up or make sure that everything is there that they need. They’ll take over the chats and organise dates etc..

► How did ‘Free the Nipple’ come about?

Megan: Me and Nuala went out to A Bad Cavalier show, two or three months ago. We were very drunk and Nuala was talking about being a burlesque dancer and not being able to show her nipples because of the law. Then Brendan (Bee Mick See) came up with ‘All about the titties, no tassles’, and we joked around that we should turn it into a song. Brendan was adamant that it was definitely going to happen. Then Cheylene wrote all the music and it just happened because of alcohol. That’s when all the best ideas happen.

Cheylene: That’s true. We were so excited about it and it seemed like loads of fun. Then we looked into it and there’s this whole movement behind it already so we should totally get involved with this, then it snowballed and we wrote this song about it. We did a rap, which Brendy helped us with, then we did this video and thought we’d do a launch night, why not, it sounds like fun.

► Who all is doing the rapping on the track?

Cheylene: Me, Megan and Nuala are doing most of the rapping, I don’t know how Brendy convinced us to do that.

Megan: I swear my accent is not made for rapping. It’s not all about Brendy, it’s something new.

Cheylene: It’s interesting but I think the message of the lyrics are good. Brendy has a great rap verse, when he comes in you know he’s totally a rapper, it sounds great.

► And you’re tying it into the Free the Nipple movement?

Cheylene: Definitely. I think it’s a really good movement and there’s not really much traction with it here. It’s quite big in America and other places but I suppose it’s because we live in such a cold country there’s never been much want for anyone to take their top off. There’s so much behind it as well, even women breastfeeding in public, objectification of women and if you wear less then you’re asking for it or wanting attention, or not wearing bras – which I’ve fully embraced since starting this. All of that is quite close to home.

Megan: There are some serious messages in the song. It’s not just craic, it’s actually got a message behind it rather than we just want to show our nipples.

► Who was involved in the video?

Cheylene: So Go Girl really got behind the whole thing as well. Ciara McMullan offered to film it, a few others wanted to be in the video and some of them made t-shirts for it.

Cheylene: It was just a handful of Go Girls in the video and then Brendy and Nina the dog.

Megan: And for recording as well Go Girls got involved, shouting and gang vocals.

Cheylene: We went to The Bar With No Name, upstairs, some Sunday afternoon, shouting things like boobs. There was a busy bar downstairs, I think we really scared them.

► What are your plans for the launch?

Megan: There will be cakes, bubbles, balloons and photos. There’s an exhibition by Ciara McMullan, behind the scenes of the video shoot. It’s in the bar we recorded it in, we all love that bar. 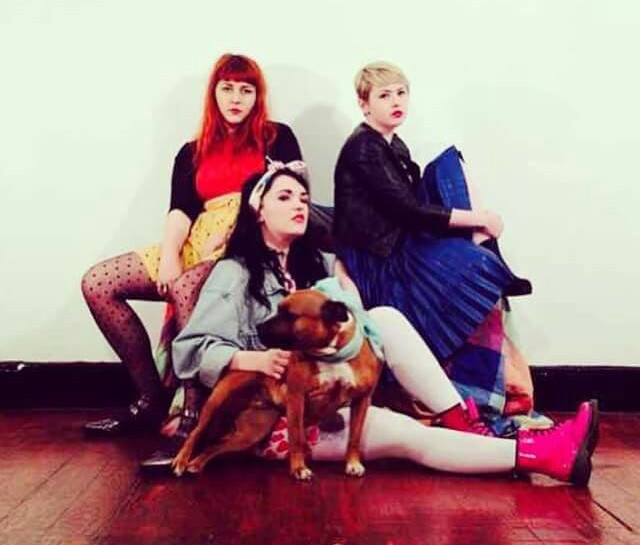 ► Do you have any plans for future projects?

Megan: Whenever you add up all the projects that Go Girls are involved in, there’s a lot going on. There’s lots of Go Girls who are musicians. And Ciara’s working with Northern Irish Creative women to do a photography project.

Cheylene: The next thing I’m really excited about is doing a supergroup of female musicians coming together and covering Northern Irish bands and getting the opportunity to write together.

Cheylene: Then there’s a writer’s circle. And we’re making zines, which is class and so much fun. We all met up to make one and it was a really fun, crafty day.

Megan: We’ve already made one and they’re all going to have a different theme and we’re halfway through making our second one. The first one is about Go Girl and what our ethos is.

Cheylene: In our first hang out we made a Go Girl wo-manifesto. There’s so many projects. That’s the great thing, it’s just this big community of people that you can get in touch with and all this creative stuff happens. If you have a fun idea you can take it to them or get involved.

► Can I hear the Go Girl manifesto then?

► Anything else to end on?

Megan: Come down to The Bar With No Name on Tuesday night, at 10 o’clock. There will be cake, dancing and a really fun video. And it’s only £2. What more could you want from a Tuesday night?

Premiere: May Rosa – Not Me