by Robert Brown
in Interviews

On 24th August, we will lose one of our finest musical talents to a different continent. North Coast native, Hannah McPhillimy will be packing her bags and saying farewell to Northern Ireland for a two year course at the University Of Michigan. On the eve of her farewell gig, we spoke to Hannah about her career so far, that debut album and what her plans are while she is away.

►The University of Michigan is based in the busy Mid-Western city of Ann Arbor which is a far cry from your upbringing in the rather sleepy North Coast town of Coleraine. What has prompted this adventure into the unknown and what do you intend to achieve from it?

It all sort of came about from a mini crisis I had over Christmas last year. Over the last 4 years, I have been juggling retail, teaching, front of house work as well as writing and performing music and I was tired of spinning plates and working by myself. I was also battling the idea that my music wasn’t going anywhere and it would probably make sense to stop soon vs. the idea that it is my favourite thing and I had no other perceivable skills.

So the next obvious step was to google ‘Retreats for Musicians in the Summer’, book myself in for one I thought seemed friendly in New Hampshire, plan a 6 week tour around the U.S for after and jack in the teaching.

I FECKING LOVED IT.

There is something incredibly life-affirming about travelling across the world and finding people who love what you love as much as you love it. One of the people I met there happened to be a professor at the University of Michigan and he suggested I apply to his program and when I got home, I kind of thought ‘why not?’

That trip helped remind me that – whether I am a commercial success or not – I want to write music and take it to the deepest possible level I can. This course is kind of me putting my stake in the ground and saying ‘you know what?’ I’m going to make music my main thing and I want to give it the time and attention it deserves over these next two years. My only big aim over the next two years is to become a better songwriter/composer and to give myself the best chance possible to work as a professional in this area in the future. New environment/mentors/collaborators/audiences will all hopefully contribute to this!

►You have done a lot of work trying to raise awareness and funds for various charities including the Alzheimer’s Society and No More Traffik. Do you feel that musicians should be doing more to promote and encourage people to engage with charitable causes?

Hmmm, this is tricky because I think probably everyone could be doing more to promote and encourage people to engage with charitable causes and musicians in particular do have a wonderful platform through their art to mobilise people. On the other hand, it’s so easy as a musician to get roped into doing so many good causes that it can become unsustainable. For me, these particular partnerships worked A) because they were charities I was personally connected to and because there were creative benefits that were as – if not more – valuable to me than the money. For Freedom Songs, I wrote a collection of music that could be performed acapella, while for The Alzheimer’s Society I wrote songs to brief, based on my friend Jan Carson’s writings – both things which I wouldn’t have dreamed of doing by myself and are still some of my favourite things to perform. My advice for musicians would be to pick causes that inspire you and give you the freedom to create something new, but don’t feel railroaded into every cause that comes your way.

►We have been lucky enough to get four rich and satisfying EPs from you so far, why have you opted to release an album at this particular time in your career?

I think I’ve got to a point where I feel ready for it and I think it would be fun! The previous releases have been great for experimenting and getting used the recording process and working with other people. Now, I have a good idea of the kind of sounds I want to make and more confidence that I could execute them – it feels like a good challenge to set.

►Given that your plan is to release the album this time next year, how will living in America impact the recording process? Will it be done in the transatlantic stylings of a Postal Service or Malibu Shark Attack record?

My hope is that it will definitely affect the recording process, but I am not quite sure what specific influences will make their way onto it just yet. Although I do hear Iggy Pop hangs out around those parts…

►Your previous releases have been self produced but this time round you will be working with producer Stu Reid. How easy has it been to open yourself up to a second opinion after working on your own for so long?

It has been HARD. Let me tell you. I often find it hard to separate my music from myself as an entire person, which is not only insane but does make it difficult to listen to critique. However, it has helped that I’ve known Stu outside of music for a year or so now so there is a lot of trust there – I know when he challenges me on my writing it’s usually because he thinks I can do better and not because he has an agenda and wants me to sound a particular way.

►As well as working on your own music, you’ve been a band member of indie pop hot shots Go Wolf, appeared on Owen Denvir’s ‘Staring At The Sun’ and scored some music for Jan Carson’s first novel. Do you think these collaborations have had an impact on your own writing?

These are all writer’s I respect and although it hasn’t been in a massively conscious way I think it has made me aware of the range of approaches you can take when writing a song, because they’re all so different. That has been helpful in freeing me up in my own writing to try out different things. For example, Scott (of Go Wolf) manages to write lyrics with great depth, without being wordy. This is something I’ve attempted to do in this new record, to see what happens – I don’t know if you have noticed but I’m not naturally very concise…

►More and more artists are using the crowd funding route to generate the money required to release new material. Have you found it to be daunting asking for help in this way?

Yes, definitely. It instinctively feels wrong and embarrassing to ask for money, but I’ve come to see that it’s really just a different business model. Record labels are no longer able to provide the initial investment artists need but it does need to come from somewhere – this way people are able to make sure the music they want to hear gets to happen and for those people they are essentially pre-ordering a product, not throwing their money into an abyss. So I have made my peace with it.

►You were quite a late starter in terms of playing and releasing your own music. Do you think the maturity that comes with being slightly older helped you to deal with the practicalities and challenges of being a full time musician?

I think I’m quite a late starter generally, so I’m not sure I was any more prepared for it than the average sixteen year old !! That being said, I think for me it was a good thing that I personally started later – it meant I was a little more sure of myself as a person and so was able to release songs that sounded like me, rather than a knock off version of T Swift or something. I also think when you’re older you’ve learned to keep things in perspective and are more aware that both the buzzy times and the quiet times don’t last forever and aren’t necessarily a measure of whether you’re making good music. You are better able to discern what – and who! – is worth listening to and what isn’t.

►Five years on from your first gig, you are returning to 101 Donegal Street where it all began to play your farewell gig. Apart from lots of people trying to convince you not to leave, what can we expect from your final performance?

It’s going to be a whistle stop tour of all the projects I’ve been involved in during my time in Belfast so I’ll be playing a selection of songs from all 4 E.P’s with my band. I’ve also got a few guest appearances from some of the collaborators I’ve worked with in the past including Jan Carson, Scott Jamison and Joshua Burnside plus a sneak peek of the new songs. And if none of that stokes your fires, my mum has promised to provide a cascade of fifteens and tray bakes so hopefully there will be something for everyone!

You can also help Hannah fund her debut album, ‘On Hold’ by visiting her GoFundMe page. 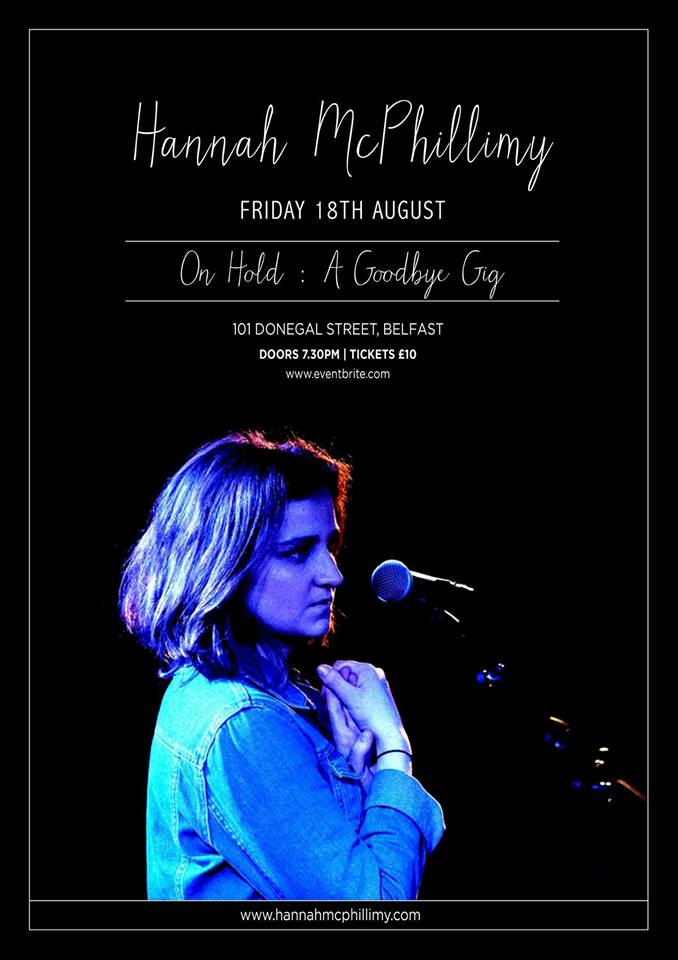