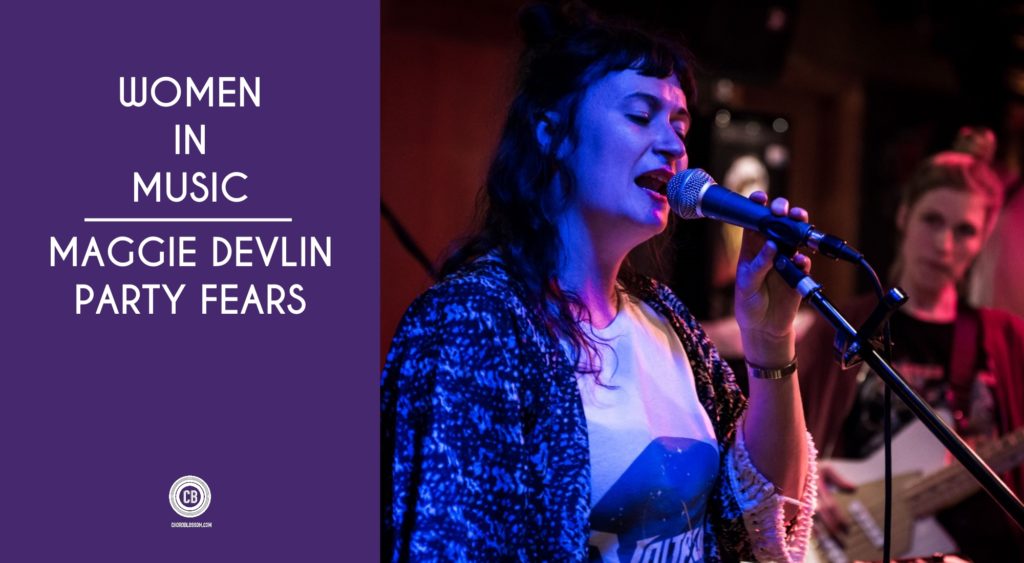 Maggie Devlin, half of the Berlin-based indie group, Party Fears (along with drummer Eilis Frawley) talks to us about the fear of creation, women with guitars jammed between their thighs, the journey from Cookstown to Berlin and a possible sponsorship from Cookstown sausages.

►Who are Party Fears?

So it started as a solo project in Korea, I was in two other bands and when they ended I found myself with a lot of leftover songs. I sort of felt like ‘I’m just getting started with music and I don’t want to stop being in a band, I guess I’ll start my own’. I guess that’s where Party Fears was born. Me and the drummer, Eilis had been kind of side-eyeing each other for a while, and yeah, we moved to Berlin and upgraded from a solo project to a band.

►You’ve mentioned that you got into the music scene quite late, how did you find the confidence to start making music?

I would honestly say that I haven’t, I don’t know if I ever will. It definitely gets easier doing this thing but it’s not something that either comes naturally or that I’m not thinking about 100% of the time…But I really just love it, so I either don’t do it, or be really really scared and do it anyway and then feel good. You just have to do it anyway, and that’s sort of the mantra that I’m carrying forward, and I think I can make that work. There’s a bunch of musicians and comedians and actors and stuff that, like, the act of their own creation terrifies them and they’ve just got to do it, or not create anything at all, which is way scarier.

►Do you think being a woman plays into the fear of creating your own work and putting it out there?

Yea definitely, I think there are so many threads to this, it’s not just one big overarching thing – I also think that class comes into it. You know I was never sent to piano lessons, it wasn’t a thing in my house, and then I went to grammar school and everyone had violin and piano lessons and I was like, ‘You don’t even like music!’ y’know. I think, that at the same time my brother was learning guitar, I was cutting out pictures from magazines of boys who played guitar, or trying to kiss boys who played guitar, cause to me felt like, oh that’s my job or that’s how I connect to music. Again I don’t think every girl is like this, I think some girls are stronger and more self-actualising, but genuinely looking back at my teenage years it didn’t feel like an option…it didn’t even cross my mind that I would do it.

Also, when you lose two or three years of ground on your peers… from the age of about 19 I would say I felt too old to learn guitar… even at 22 I was like, ‘ah I’m too old to learn now’. So many dudes that are really accomplished now, they had their shitty bands when they were teenagers in a garage. But as we’re coming to it later, we have to have that experience in front of an audience. So I think that that was hard, just being like, ‘ahhh *sighs*, I guess I have to suck for a while and do that thing that loads of dudes did when they were teenagers’.

But one of the best compliments we ever got was ‘your ceiling is so high’. It really gave me a new perspective on being a beginner because people were saying, ‘every time we see you guys, you’re better’. It really flipped that journey on its head and then it became something really exciting thinking, ‘yeah I probably am gonna be better at the next show’, and you know when you’re not as accomplished you try out different things. So I think there’s a strength to not knowing as well.

I don’t wanna sound super American, but there is something to be said about just owning it, this is the band that we are and you will like us and follow our little growth journey or you’ll be like they suck, and both are fine.

►Coming from a feminist perspective, to own it as a woman is almost an act of a rebellion, it’s a political act in a sense to say I’m going to do what I want.

Totally! And even Eilis, the drummer, her sitting behind the drum kit is a political act, it’s so weird, like I don’t get nearly as much of the shit said to me as she does, because I play guitar which is a little more ‘female friendly’. It’s mostly surprise, like, ‘wow you’re so good..?’.

►Did you ever feel like there was a lack of female role models in the music industry growing up?

Oh yea, I used to buy Kerrang religiously, and if there was a woman featured, she was probably on an advertisement, she probably had a guitar between her legs, no clothes, no body hair. But what sucks is in my 30s going into guitar shops and it’s still the same thing. You walk around and any women anywhere on the walls have a fucking guitar between their legs, it’s so obscene. But then the internet came along and oh my god, the DIY indie scene has so many female role models and that’s really cool… like Mitski, Japanese Breakfast, Jay Som. I feel like I don’t need to spend £2.50 on a magazine, you guys can keep your boys club and I’ll be over here enjoying this really fresh cool music, you guys keep playing your dad rock.

►What inspirational female musicians are you listening to at the minute?

Well, St. Vincent obviously, she shreds it up on the guitar and that’s wicked. There’s a band from Korea, Juck Juck Grunzie and their guitarist, JiHye is just incredible. And Korean guitarist JiNa Kim from Billy Carter is stupidly good at blues guitar, Gwen from Monodo Fumatore. Kate Bush is an enormous influence, especially in terms of her weirdness. Oh and I love Kirsty MacColl and her frizzy-haired council estate look.

►Can you tell me a little bit about the collective you’ve started in Berlin, Bang On?

We are very inspired by a collective which we were part of in Seoul called Loose Union. They promoted bands and were loosely similar to a label, and we loved them. One thing that was maybe lacking was a little bit of representation, so we wanted to put a spotlight on more female musicians. It was really Eilis’s brain child and we founded it together about a year and a bit ago. We run events every month and the only sort of stipulation is that the band has to have at least one female, or non-binary or trans member. We’re doing a festival in April to celebrate one year of Bang On, which is really exciting, we’ve had loads of applications which is a bit like ‘why do you trust us?’, and we do a podcast every month as well!

►You played the Women’s Work festival at the Oh Yeah in Belfast last year, how did you find that?

That was actually our first time in Belfast. You know what’s really great, I’m so confident telling people you’re going to have an amazing time, and they do. Women’s Work was amazing, it was so great meeting Charlotte (Dryden) because I’d held the Oh Yeah Centre in such high esteem, and playing in a venue where Stiff Little Fingers memorabilia was everywhere was amazing. It was where we first properly met Beauty Sleep so in terms of connecting with really talented, beautiful people it was awesome. The Girl’s Rock School performance, they walked on stage and played like one note, and I burst into tears because it was just so cool, they were class. I loved it.

►What do you think are the biggest challenges for women across the music scene right now?

I think comparison is a fucker, I think that’s probably the biggest thing going against girls. I’m hoping it’s a bit different now and that there are more role models, I have a sense that girls are kind of starting to speak up more and take less shit. Because so much of the shit that was thrown our way, I didn’t even know it was bad, I only started to ‘get woke’ or whatever, kind of late on. So yeah I’d say trying not to make unfair comparisons to others, and to recognise that historically it’s been an uneven playing field. Comparison sucks, don’t do it, just do your own thing. 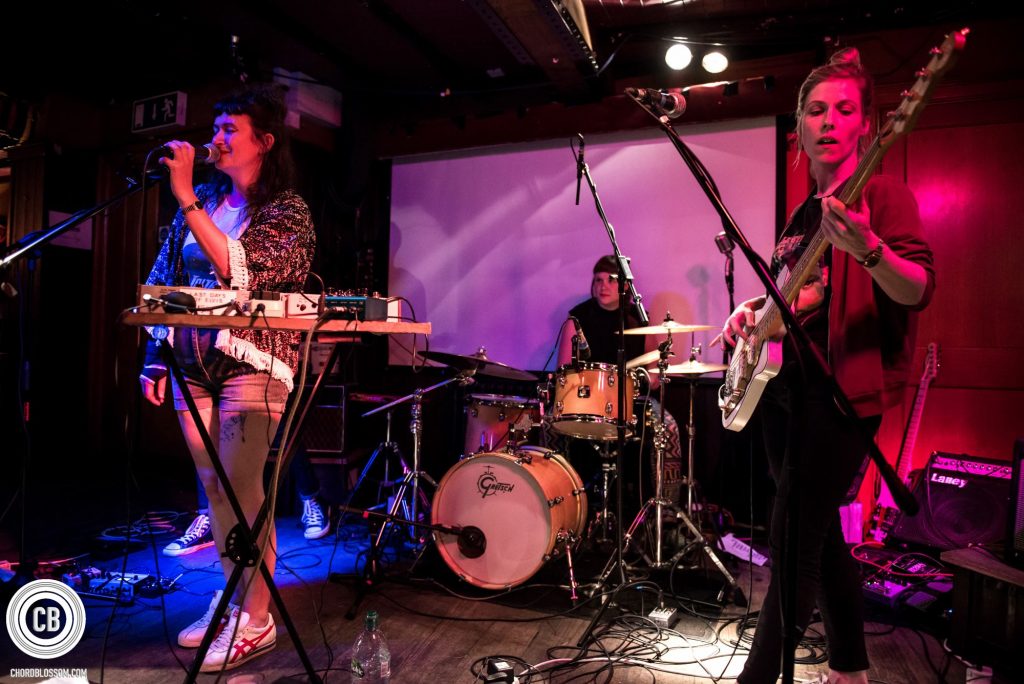 ►How have you found the cultural differences between Seoul and Berlin compared to Cookstown?

Seoul was just such a crazy mind fuck. I went for one year and stayed for 5, and played music properly for the first time. Korea is just a beautiful, weird, dystopia, dark place but also really nice.

Berlin, is the only place, I’ve ever lived where I’m able to say, ‘I’m a musician’, with a straight face. It’s something that I’d say is very culturally encouraged here, even if someone works in marketing and you ask them what they do, they’ll say, ‘oh I’m a yoga fanatic’ or whatever… here people will just be really proud of what they do when they’re not making money necessarily. On the flip side, I’d say Berlin is the hardest city I’ve ever moved to, it’s very unforgiving, and very, very hard to get established. Unless you get a bit of luck, which I did, I don’t think anyone could blame you for coming here and not being able to get a foothold and leaving again. It’s a very common Berlin story because it’s a mean, mean town.

►If you could bring one thing back from the Berlin music scene to N.I what would you bring back?

Honestly, and this is not lip service, I think that Berlin could learn a lot from Belfast, it could certainly learn a lot from Seoul. I think that Belfast is really a shining light in terms of work ethic and quality, and ambition. And yea its the other way round. It’s probably that thing of people in Berlin being really comfortable calling themselves artists whereas at home in our N. Irish way we’re like ‘oh I’m shit, don’t look at me’. Maybe, I’d say some of that Berlin, I-don’t-give-a-fuck-confidence. But probably it’s more a case of what could be exported from Belfast back to Berlin.

►Is there one thing in particular you really miss from home?

If you can hear that rustling, it’s actually bags of Tayto sitting on top of my piano. Actually, I’ve run a very aggressive campaign through our social media channels to try and either get sponsored by Tayto or like Cookstown sausages. No luck yet.

►So what’s next for Party Fears?

We recorded four new songs in Belfast with Ryan McGroarty of Beauty Sleep on Start Together, and will release the first single this spring. I would say these four songs are a more representative of Party Fears than the album. It’s really exciting.