by Aidan Lavery
in Interviews

Plague Artists, a Belfast based hard rock band, boast a wide variety in their sound that takes inspiration from various styles; the progressive touches of Tool, the riff-based heaviness of Queens of the Stone Age and Red Fang and the dark, passionate song writing comparable to bands like Pearl Jam and Soundgarden. In 2017, they are about to launch their second EP, Comes Down Like Stones. With their upcoming gig on Friday 28th of July, I met up with Leighton, Chris and Jamie  at their rehearsal space to quiz them on a thing or two.

►So guys, Plague Artists has been about for 5 years, since 2012. How did you all come together?

Leighton: On the internet; very dodgy!

Chris: Well, Leighton and John got together first of all, and they kind of sent stuff back and forwards.

Leighton: Yeah, we used Fastfude, which was like a forum where you could put ads and stuff up so I had some stuff that I had recorded on a digital 4-track, I stuck it onto a MySpace page and onto Fastfude and John got in touch with me. John came round and we went through each others’ stuff and we started jamming for about a year and consolidated some tunes. And then we recorded some of them on a laptop and did the same thing with Fastfude. Chris also put up an ad on Fastfude so we got in touch with him as well and jammed in the hall that he had his drum kit in and we were happy with that.

Chris: Yeah, the stuff was cool. I thought we’d go for an instrumental kind of thing just to be different and because we couldn’t find a singer. The material back then was just skeletons of songs without structures, skin and bones stuff.

Leighton: It was just a hobby thing initially then we thought this was starting to really gel together.

►Jamie, how did you end up joining Plague Artists?

Chris: It was a couple of weeks after Jamie joined where we just added pieces together and it became a song. And we made three or four songs out of that and we realised there’s definitely some magic going on here.

Leighton: We broke off for Christmas 2011, came back in January 2012 and did the first gig in June and we figured that’s where we start there. We had been around a bit longer than 2012 but 2012 was the official first gig.

Jamie: Yeah, it wasn’t like we were school mates or anything it was just four guys who wanted to be in a band. We’re from all over the shop; Newtownards, Ballyclare, Banbridge and Whiteabbey.

Leighton: Fastfude isn’t there anymore, before then you’d put up notes in café’s or Matchetts or whatever. There was always a slagging match going on in Fastfude sometimes it was also quite funny to read!

►You guys listed influences from bands such as Pearl Jam, Alice and Chains, Queens of the Stone Age and Tool among others. What elements of the bands would you say are particularly influential in the way you make your music?

Leighton: Song structures mainly, like the way Tool and Soundgarden did it with time signatures and stuff like that, and the way Mastodon put songs together as well. Like, we don’t just want a “verse/chorus/verse” thing, there has to be a middle-eight or something like that. If it’s got a good groove and it settles like that then it’s grand but sometimes we feel it just needs a wee bit more and we chuck a couple of extra bits in. Therapy? does it as well; they’re from here and we kind of look up to them a bit because of that.

Chris: There’s a rawness about it as well, with the whole 90s thing. It’s almost like grunge was the punk of the 90s, so you had this super-polished music that was really well-produced and really amazing. Grunge just had this punk element of just “let’s just do it! Rock out, turn the bass right up, add as much gain as you can to your guitar and just thrash.” And without sounding thrashy and metal and all “rawwrrr!” there was emotion and dynamics in it. All those bands we mentioned before, all their songs are like that; if it starts heavy then there’s going to be a soft part in it and vice-versa, if it starts of soft and slow then there will be this raw and heavy part. That’s what we like in our songs, we’ll have a song with this soft part and say “this will be our ballad” and then three weeks later it’ll have this heavy, sludgy chorus. It was the freedom of doing whatever we wanted to do with our songs and not having to conform is what influenced us.

►You’ve got this gig coming up on the 28th, and you’re being supported by Rosco’s Riot and The Crossfire Hurricanes. Is there any other local artists that you’re into at the moment?

Leighton: I like Sister Ghost. I really like what she’s doing, she’s kind of grungy but from the Sonic Youth sort of perspective. Like, from a real, stripped down garage sort of sound.

Leighton: Nasa Assassin are brilliant. They have a class song called ‘Mystified’, and there’s a video of it on YouTube and they’re really good live. Their frontman is just a rocket! He’d come out with the doctor’s lab coat on, glasses and a clipboard and just give it total stacks. His lyrics are hilarious and at the end of the gig there’s just a sandwich board with mad stuff written on the front and the punchline written on the back. Their live sets are brilliant.

Jamie: I like Zlatanera. They do a lot of gigs with James Loveday from The Distortion Project and they’re supporting Orange Goblin later in the year. They’ve just got really good riffs and a bit of black humour to them.

Leighton: The Defects are also really good. Just old school Belfast punk. They broke up in the early 1980s and they reformed in the last couple of years. Aidy from Nasa Assassin played a bit of bass for them as well, and it’s just really good old school punk.

►What’s next for you guys after EP launch? Any plans later in the year?

Leighton: We’re working on a third EP at the moment. We have three songs recorded now, we’re just finishing the fourth. It might be more than an EP, it might be more than five songs but we’re seeing how it’s going to pan out. So, we’ll finish this next song, get it recorded and hopefully get offered a couple of more gigs. We’ve applied to Sunflower Fest and Stendhal, so hopefully getting a bit more publicity might get us some more to put on our CV and get us more recognition. 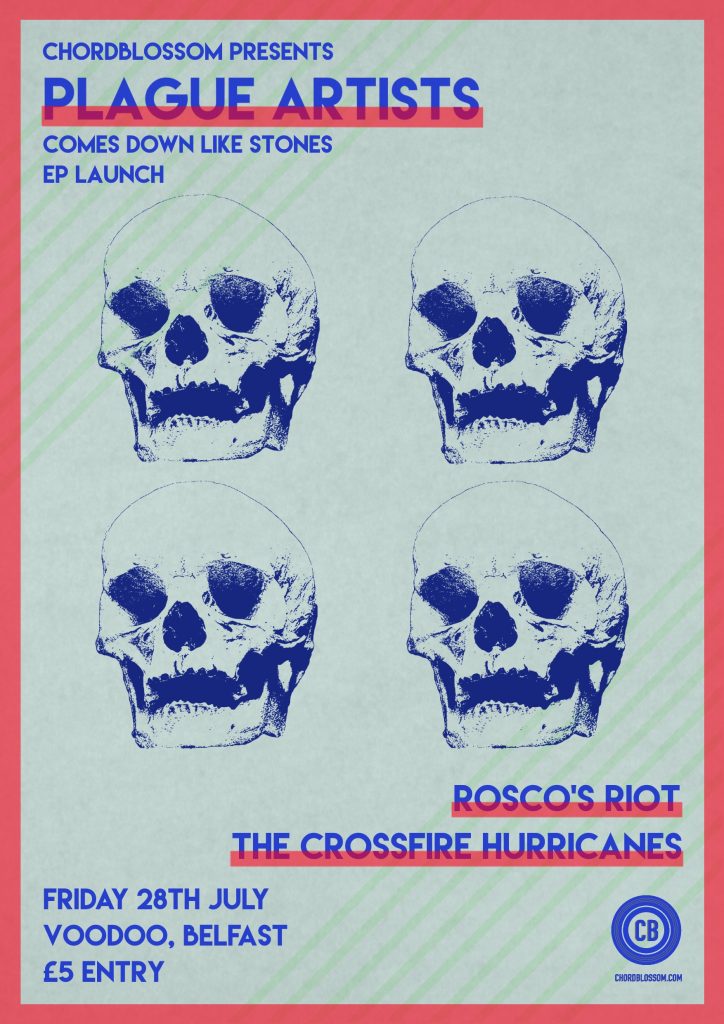