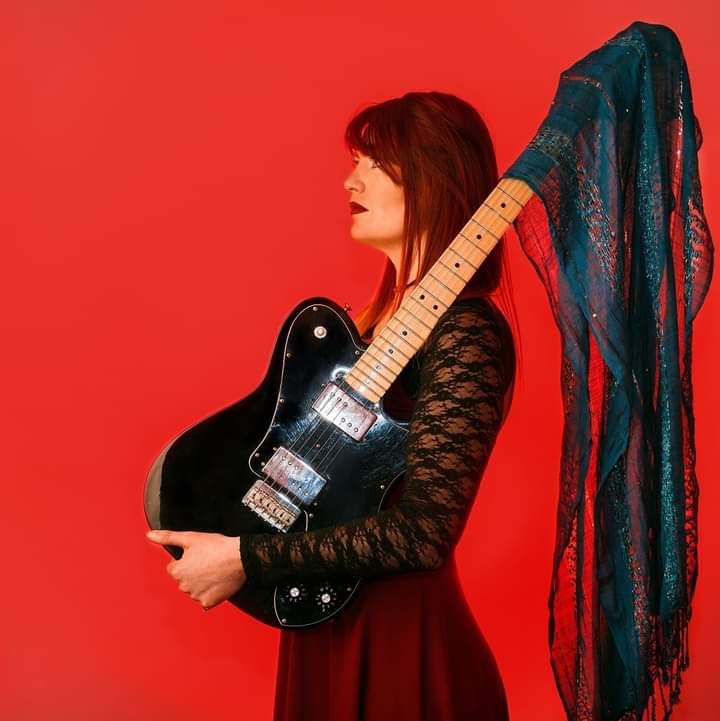 Shauna Tohill is Rews and Rews is Shauna Tohill. It is that simple. And as we approach the end of lockdown we had a Coronavirus style chat with Shauna to talk about her musical life, the difficulties, and positives, of being a musician during lockdown,  and the release of her sophomore album Warriors, on the 7th August.

As Shauna tells us, she hails from “good old Norn Iron”, adding “Magherafelt” specifically. The town itself harbours “so many talented creatives”. She admits to growing up “surrounded by rock and pop musicians, even my parents were in bands”. All this has helped shape her taste in music and impacted greatly on her musical journey.

Growing up in Magherafelt “we had two grassroots venues that were our staple for live music. Brysons in Magherafelt, which still exists but unfortunately not as a rock venue anymore” and “the Cellar bar in nearby Draperstown”. Shauna laments the demise of the bar which is now unfortunately closed.

This alone further reinforces the resolve of the music industry in general, especially on the back of the current Covid-19 crisis, to do everything it can to ensure that these types of music venues remain open. They are the lifeblood of the music industry and are places that many bands ‘cut their teeth’. The reality is, we as music followers must always do all we can to support these independent venues. It is now more important than ever. It goes without saying that Shauna has been an active supporter of the #saveourvenues campaign.

When talking about her musical influences Shauna tells us, “musically I am inspired by musicians and people who play their instruments with genuine conviction, pure expression and magic”. She is impressed by Rose from the Valeras and Janine Shilstone from Vukovi. “It’s all about great songs with unusual chord changes and songs that make me think about things I hadn’t previously thought about”. On her decision to pick up a guitar and learn to play, she says “It was a mixture of my parents’ break up, combined with Korn, Evanescence, Avril Lavigne….. And BUSTED!”. We didn’t ask what Shauna’s favourite Busted song was!

When she was young Shauna admits she had no great desire to get into the music industry. “My parents were off gigging most evenings and weekends and I fancied becoming an astronaut or maybe an inventor”. In the end it was the healing power of music that finally sucked her in. “It helped me, as a very shy teenager, to express my negative feelings, and in the end I really wanted to explore writing music that would help people”.

The music industry is one of the hardest, meanest, most unthankful (except for the fans!) industries of all time”. We asked Shauna about the main barriers to success that she had encountered, and she states, “It depends on your definition of success. Your success, generally, is knowing what you want and having the right motives”. Being successful is a “result of the amount of energy, focus, blood, sweat and tears you put in”. But there is an added ingredient in that road to success. She says “it is imperative to have the right people behind you, people who journey with you and who ‘genuinely’ believe in you”. Shauna adds, “those are the people who inspire you and pull the magic out of you, not the madness”. In essence this is in itself perfect advice for living your best life.

Rews was originally a two piece outfit throughout the preceding years and the release of the first album Pyro’. “The duo was awesome and great fun”, but she adds “this felt like a good time to explore adding a bass guitar and having more bodies to rock out on stage with”.

The writing and recording process for Rews is fairly simple. It is a little unique with Shauna mainly doing all the writing and adds “I’m lucky to have friends come on board for the live sets”. The recording process for the new album was undertaken alongside producers Alex Loring and Tom Andrews. “ We, of course, had debates about how things should sound, but it was only so we could get the best version of the song on the record”, adding “we worked well together”.

The drum tracks were recorded over a three day period with Scott Hislop, and Ele Lucas was able to chip in and work on the track ‘Today We’re Warriors’. “It was really lovely to have them there!” says Shauna.

The album Warriors itself was recorded in Giant Wafer Studios in the middle of Wales. One word from Shauna describes it – “epic”! The writing of the album was a journey for Shauna personally, “it helped me understand more deeply how (or maybe how little) I feel about something… but i also empathise with what others are feeling and going through”. The album is about “powering through each journey we encounter in our lives”. She has a hope “that it will inspire people to feel that they are not alone, that they belong, and that we all need to just take small steps to get through difficult situations”

The opening lines of ‘Heart Is On Fire’ extol the virtues of living life in the best way we can. ‘ Breath in, fill your lungs, feel the buzz, the oxygen”. It’s about the simplicity, in the first instance, of just taking it all in.

Shauna says that generally she finds it quite easy to write the material for the band and that sometimes it is “more about finding the time”. By the sound of it, writing can sometimes feel like a weird process. “It can feel laboured” she says, when she admits to putting pressure on herself. “That is usually when it is time to either take a break and do something different… or sometimes that is when the magic comes out of nowhere”. Go figure this one out!.

Looking back now at the finished album Shauna finds it hard to pick out a stand out track for her. “They are all my little babies!”. But when we force her to pick she says her current favourite, at this moment in time we might add, is “Love Hate Song”. Why?. “Because it is rockin’ and I love the story in it”. “Emotionally the most difficult track was ‘Bad Habits’”. It is the one she says she cries at, every time she sings it.

Shauna says that the song ‘Heart Is On Fire’ is very much about positivity. She genuinely feels she has always been a positive person and seeks in her writing “to really try and draw the good things out of bad situations”. She admits to writing some negative songs but mitigates this by enforcing her thought that she wants these songs “to be more of a positive inspiration and to help people out of bad situations”. She adds that “the downward spiral is hard to get out of”. We all appreciate, in this day and age, that looking after our own mental health is now a huge part of our lives. As listeners of music, finding inspiration in other people’s music can be a godsend.

The current situation around coronavirus and lockdown has seen a crazy amount of pressure, doubt and fear for musicians which Shauna describes as “a surreal situation”. She admitted to being worried about it in the beginning, but as ever sought out the positives in it all. “I spent a lot of time figuring out how I could connect with my fans online. There were online gigs and tutorials, more writing, running, yoga and quality online time with friends and family”. “I’ve also been lucky in undertaking a temporary post at the local hospital. Through this, I’m getting to help people which has been both eye opening and educational”.

The coronavirus situation has been extremely tough for society in general and Shauna reiterates this when she says “I worry about venues, creatives and other parts of the music industry that are really struggling, but personally, I am trying to do as much as I can to help keep spirits high, and stay mindful and positive”.

On getting back out into the live arena and playing this album she says “I can’t wait to get out and gig again. I really miss jammin’ with people!”

When asked what bands or artist that Shauna would like to be rated alongside, current or otherwise she replies “Ohhhh… interesting!”. “Maybe Biffy Clyro, The Bangles, Billie Eilish…..there are so many amazing artists out there”.

And finally talking about what she would like people to take away from the album Shauna says “I guess I would like people to feel that they are not alone in their journey through anger, worry, frustration or whatever they are experiencing. Hopefully through the album, people might learn more about self compassion, the power they have to change and do things that make them happy, even just a little bit, and to remove those things that drag you down”.

The album Warriors and Rews are all about positivity. There can be no doubt about that. This is a perfect mantra for us all to aspire to in these testing times.

Warriors is out now and available to purchase directly through the Rews website.