by Ben Magee
in Interviews

I had a chance to sit down with local rock and rollers Saint Sapphire during one of their practices at the Blackstaff Mill. I went in expecting 15-minute recording, I left with just under an hours worth of material. The relevant text of the conversation has been recorded below, but what has been left out are stories ranging from perilous journeys returning from Tesco at 5 Am, making animal noises at Sunflowerfest and the worlds most beautiful McDonalds. None of which had anything to do with my questions, but that is very much the nature of Saint Sapphire: unpredictable, funny and bordering on relentless.

► I’ll try and keep this sweet. So, first of all, how are you all doing?

Adam Walker: Oh has it started? (I confirmed that we had indeed started) Oh sweet.

► You guys are playing a lot of shows recently, is this a build up to a tour or are you just always working?

SM: Perfecting a sound, like a proper sound… We don’t want to play shows half-assed and not rehearsed so yeah, (we are focusing on) studio stuff.

► You don’t take yourselves that seriously online, is this (the band) the only thing you are really serious about?

AW: You can’t have fun if you’re taking yourself that seriously.

SM: Yeah, I feel like and I think we all feel like a lot of people take themselves way too seriously because at the end of the day, especially when you’re on a local scene basis, it is really easy to get lost in the idea that “Oh were in a band, we’re high and mighty” but at the end of the day… I think a lot of people just take themselves too seriously.

Eoghan Johnson: I think it was Justin Hawkins (The Darkness Frontman) who said every rock and roll band should have a bit of spinal tap in them. I don’t think rock and roll is a genre where you can take yourself too seriously… Yes take the music seriously but when it comes to having fun and having a good time you know?

SM: Yeah music is the one thing we take really seriously but we try not to remove all joy from it… We don’t want our personalities getting lost in the fact that were in a band.

AW: You’d rather see a band onstage who are shit and having a good time rather than the most technical band of all time playing.

Danny Martin: Obviously there is some seriousness there though, like coming up to a gig well pull our heads out.

SM: I prefer soul and the vibe to technical shows.

► So less than seriousness, would you say its more of a respect thing you have for what you’re doing?

► On the back of that point, you guys were named one of the top 10 bands to watch in 2018 by the Irish Daily Star. Is that recognition/respect something you strive for or enjoy?

SM: I don’t know if I’d go as far to say… Its really cool to have (things like that to) happen. But you don’t want it to become more important than the music, making good tunes and having a laugh have always been the most important thing.

EJ: Of course you want to be liked.

DM: You want people to respect you as a band.

EJ: It’s amazing if someone else likes what you’re doing.

AW: It doesn’t matter (to me) if one hundred articles say how good a band is, you need to go and see for yourself. (This is) almost like a lifestyle now… we’ve pretty much devoted ourselves to this.

► Just on the subject of recording, your newest release Hurricane has the makings of a lead single. Is there an album on the way?

SM: Not at the moment, mainly because… there is a very real issue in that it is really expensive to record music.

DM: We do have new material.

SM: We have so much material, but when you’re just doing stuff yourself it is really expensive to fund your own recordings. There are various things in the pipeline, we are going into the studio next week.

EJ: I think the main thing to say is that Saint Sapphire has changed their sound so much.

SM: Yeah its gone through a serious transformation, I’d say its gone from an almost pop-punky band to being like a rock and roll type of band.

EJ: The new recordings will show a new Saint Sapphire.

SM: I really feel like… this new recording is gonna be an arrival. Saint Sapphire has always been my pet project and its gone through so many different genres, forms etc but certainly the tune we are going in to do is, finally I think, what we were looking for.

AW: Its kind of weird to think that all of my favourite Saint Sapphire songs haven’t been recorded yet… like its weird for me that the sound that people will associate with Saint Sapphire isn’t what we sound like now.

SM: We are actually going in to record an old song… It was recorded and all but I fucking hated it so much.

EJ: Saint Sapphire has evolved and is evolving.

SM: This new song we are going in to record… all the (new) songs are in the same vein as it and its fucking fantastic.

AW: We have finally found our wee hole.

► So Sunflowerfest was a big gig for you guys, where does it rank on the best gig to worst gig? (some qualifiers were added as we established what ‘best’ actually meant. We decided on the show upon which the most craic was had)

AW: It’s funny because our best gig was easily my worst because I was so steaming and I kept dropping the sticks.

SM: Which one was that?

SM: Oh London the second time, yeah when we played the Rocksteady in Dalston, we didn’t get to finish our set because we were so loud… It got to the point that they turned the PA off but it was so small that it didn’t matter so we just kept playing.

DM: The set ended when a bouncer came over and you (Sam) were lying on your back, drunk, and playing a solo and he just said: “You need to stop.”

SM: In fairness, he was so sound, everybody there was amazing… musically it was not that great but it was such an amazing time.

► What are the influences on the Saint Sapphire aesthetic?

AW: *points to tattoo on arm of Lemmy*

SM: I feel like whats class about the band is that we all have such a broad spectrum of influences.

EJ: There is some crossover… I think 70’s based rock and roll is where it mixes.

SM: I think I’m the most far out there with my tastes of us.

► So say you had to pick three influences –

AW: Three bands that actually influence my style would probably be stuff like Jack White, cause the drums in that are so like basic but also not. And recently a lot of Billy Joel… it’s so simple and so groovy and probably also Black Sabbath because they’re the band I’ve just always been into… There’s a little bit of Bill Ward inside of me.

DM: My three simple ones are AC/DC, Guns n Roses, Status Quo. Status are a weird one in there but they’re just good auld rock and roll.

SM: In order to differentiate from that, I would say Genesis, Deep Purple/Rainbow and Claude Debussy the composer.

AW: You just have to be awkward don’t you.

SM: I’m into a lot of classical composers.

► Who is your dream band in the world to play with?

DM: For me its Guns n Roses.

SM: I was about to say Guns n Roses.

► The majority of your listeners on Spotify are from the US. Thoughts?

AW: I genuinely didn’t know that

DM: Thank you, that makes me feel good.

► What is the future for Saint Sapphire?

SM: There’s a lot of stuff happening in the background that we are not at liberty to talk about.

EJ: Onwards and upwards is the plan

AW: Good shit will be coming out… We are turning into a Ska Band. Ska Skapphire 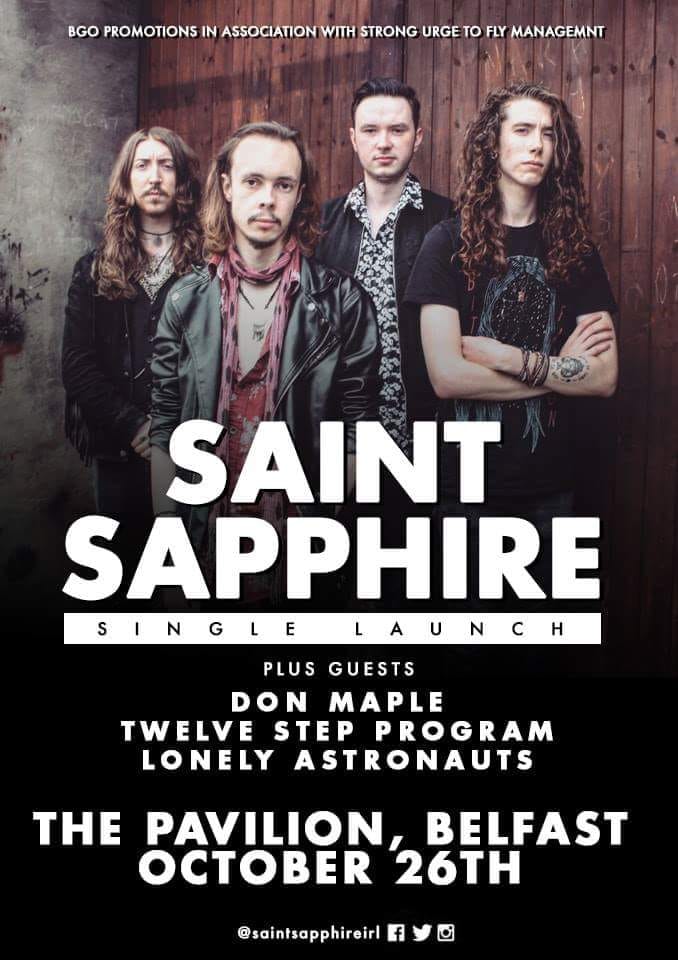