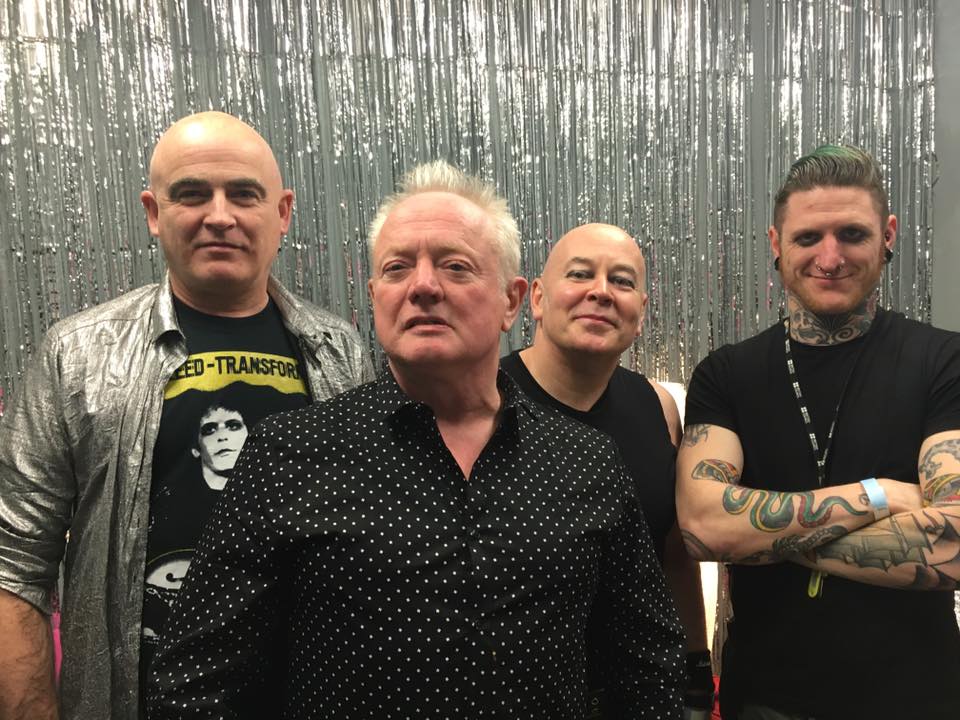 Stop Stop Start Again were one of the highlights of the local scene over the past decade. Taking the glam rock of Marc Bolan/T Rex as their starting point, they had a sound that embraced punk, post punk and hard rock. Dark, dirty and with frivolous lyrics to distract you from the darkness. When it clicked (such as ‘Bangin On Your Back Door) it was unsettling and humorous at the same time.

The recent death of singer/guitarist Paul Rowan earlier in the year brought proceedings to a hault. However, a memorial gig in the Pavilion this Friday, as well as the appearance of an album, ‘Too Glam to Give a Damn’, will ensure that Paul’s legacy will live on.

Thanks to bassist Colin Fletcher and guitarist William Maxwell for agreeing to this interview.

► Tell us how Stop Stop Start Again came to be?

Colin Fletcher: The band had originally been put together by Paul Rowan, myself and William Maxwell (all life long friends) with the sole intention of recording a track from my old band, Stage B. This was “Recall To Life”, previously released on the Shock Rock label in 1979. It was released as part of the Time To Be Proud EP series updating Northern Irish punk classics. We then played a one off gig as part of Belfast Cathedral Quarter Festival in 2011 to promote the Time to Be Proud project. The crowd reaction was very positive so we decided to stick around.

► What did you intend to do, musically, with SSSA that you hadn’t achieved with your other bands?

Colin: Paul always said it was his ambition that the rest of us would play in time with him and that we would start and end a tune roughly at the same time! Apparently, our ears are painted on. As we progressed our aim was to write good songs with classic guitar riffs and good hooks. Lyrically we wanted to write songs about a wide range of subjects incorporating a tongue in cheek sense of humour and a little touch of sedition. And I think we did that with the ‘Too Glam to Give a Damn’ album.

William Maxwell: There really was no SSSA manifesto. Just 4 guys having fun, making some great music and more importantly having a laugh at ourselves quite a lot of the time.

► There’s a sinister, yet fun undertone to songs like “Banging on Your Back Door” reinforcing the fact that glam rock was much tougher than some give it credit for. Is that the one genre that all four members agreed on?

Colin: William, Paul and myself all went to the same school and there is less than a year in age between us all. Our early teenage years coincided with the golden age of Glam Rock. We were all big Bowie fans as well as Roxy Music, Sweet and T.Rex etc. But our tastes stretch and vary into most other genres including disco, punk, soul, metal and reggae. Our drummer, George, also enjoys most types of music and likes a lot of that ‘banging’ stuff the young uns enjoy. When punk rock came along it allowed us to live out our Glam Rock fantasies on the street as it were (although one of us was earlier to that party than others.

► Is this definitely the end of the band?

William: This is definitely the end of SSSA as SSSA without Paul is unthinkable. One of the last times I saw him he said for me and Fletch to continue playing music. I think we probably will do something but its a bit too early to say what.

► Can you give us some highlights of SSSA’s career?

William: Highlights for me is the quality  of the songs and this album is quite an album. We played with some of our heroes . When I was a kid it was Bowie and punk rock . To think as a member of this band I have played on the same stage as a Spider from Mars (woody woodmansey) Glen Matlock from the Sex Pistols, Pauline Murray and Penetration and many more. After the Holy Holy gig we went back to the bands hotel for a few drinks. An acoustic guitar was produced and Paul was in his element. To see Paul sing “All The Young Dudes” with Mick Ronson’s daughter was a special moment. We were lucky enough to play gigs in London, Dublin and I think we were the first local band with no record company help to play Japan. There are so many memories its hard just to pick one. As I said above we produced some great material 3 EPs and this album.

Colin: I would add that we were the first ‘punky’ band to play Belfast Pride before thousands at Custom House Square.  As you can imagine the band are very much supportive of LGBT rights. Also the night we supported Ruts DC at the Black Box when many people came up to us saying we were the best band that night and our London gig at Islington’s Hope and Anchor. I’m a sucker for an iconic rock n roll venue!

► The upcoming Pavilion gig is promising to be a glorious send off for Paul, with even Lunatic Fringe appearing on a bill. Can you give us any hints as to what we might be seeing on the night?

William: If all goes as planned, we have the Sabrejets opening the night with their usual tight, enthusiastic set of greaser Rock ‘n Roll.  Next up we have a reformed version of the Lunatic Fringe – Paul was their front man in the mid Eighties – search Youtube for their local television performance pop pickers.

The band will feature three members of the last working version of the band plus the original singer prior to Paul.  The Fringe have only played one gig since the 80’s (about 5 years ago). Next up its us – SSSA – with guest vocalists Greg Coan (Outcasts), Davey McLarnon (Shock Treatment), my wife Alison (De Ja Vu) and Conor Lundy (the Fringe).  George Beavis will be on lead guitar.

We may also have Paul’s nephew Peter Bullick (who plays with Paul Rodgers and with his wife’s Deborah Bonham Band. Debbie is the sister of Led Zeppelin’s John Bonham and contributes backing vocals to one track on our album.  Their appearance has yet to be absolutely confirmed. The night finishes with a version of Paul’s glam rock tribute band Ballroom Blitz.

► What are your favourite memory of Paul?

Colin: His generosity towards the people he met and the bands that we shared a stage with. He was always willing to share his gear (guitars and amps – not drugs, baby!) with them, to help them get a good sound onstage and to make sure they received a cut of any door money. He was always first with his hand in his pocket for the homeless and other charitable causes.

William: I have known Paul and Fletch from our days at school so we have many fond memories. As mentioned above the after show singalong with Holy Holy was very special. Our rehearsals were always special two musicians, a punk legend and a dreamer. Says it all.