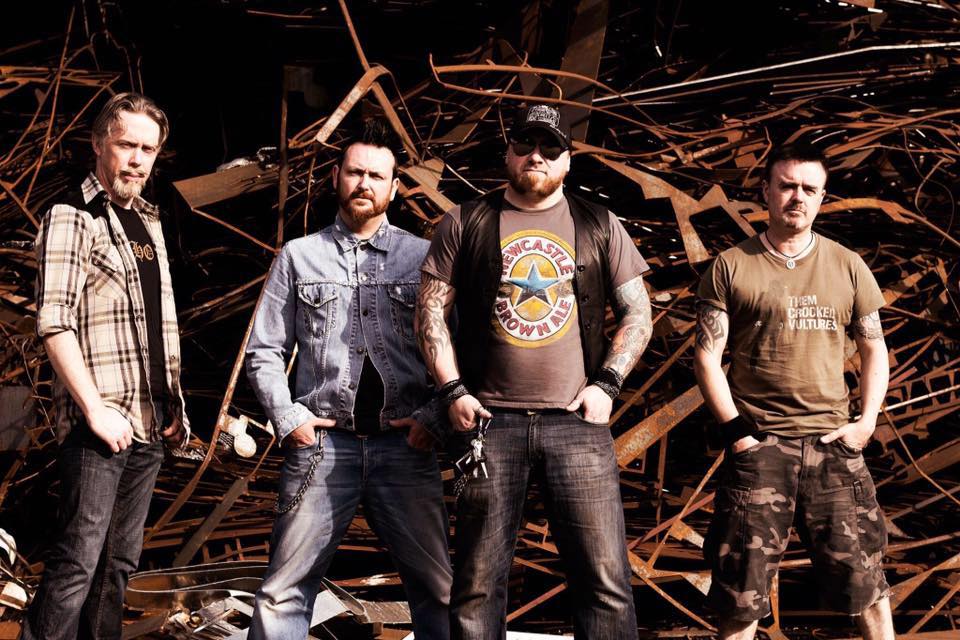 For my money, Trucker Diablo is one of our wee country’s best acts. Ruggedly, defiantly even, self-sufficient The Big Truck endures (or keeps rollin’) while other acts fall by the wayside. Put Trucker beside any of its contemporaries from around the globe and neither its recorded work, nor live performances suffer by comparison. I was looking forward to the official Diamond Rock Club Christmas Party Gig anyway, but when I was offered the opportunity to chat with some of the band beforehand, well, I didn’t mind putting off the beer guzzling for a wee minute or two.

► So guys, there’s only one question to ask at the end of the year 2016. Have you any rock heroes left alive?

► Well, he’s not actually here so, who knows, he could be gone.

►So, 2016 has been a good year for you, the album’s (Rise Above The Noise) kept going strong, some good gigs, some good support slots – the Airborne one in particular was a cracker.

Simon: Oh it sure was, we really enjoyed that show and Belfast is always good for us. And we like the big stage. You have plenty of room to hassle each other haha.

Simon: Obviously the album. Finger’s crossed. We’re in the middle of a Pledge campaign at the minute, so if that comes good then we’ll get to make the album. Trucker fans are good and loyal.

Terry: Yeah, our fans have shown great loyalty down through the years. We owe them a lot.

Simon: Yes, so hopefully we’ll get ‘Fight (For Everything)’ made and get back out on the road for a few more shows, some festivals..

► Shows in the pipeline already?

Simon: A few, but no announcements yet.

► No announcements yet, but I am sure Chordblossom will be the first to know won’t I Barry (looks quizzically at TD’s manager)?

Simon: Aye, Barry always likes to a have a wee something, a wee surprise, in the Xmas stocking for us so fingers crossed.

►I take it you have a lot of the new album already written?

Simon: Yeah, it more or less all done and dusted – a few wee tweaks here n there is all it needs.

► Where does it sit with the other 3 albums?

Simon: I think it’s getting…heavier…it’s quite ballsy. There’s a lot of ‘no-holds barred’ songs there. I think the older we’re getting, we are getting back to what got us into music in the first place…what we grew up listening to, what made us fall in love with heavy rock music in the first place…which for us goes back to Metallica, Anthrax, Megadeth, Slayer…the Big 4 as such. For a while, as you get older you listen to a lot of different music, lighter stuff, you know…trying to broaden your horizons. But then all-of-a-sudden you go ‘F*** it I want a riff’

Jim (McGurk – Bass Guitar): I think when you get older you go back to bands that you loved and then you start to look at their influences, then you hit the point where you go ‘hang on a minute, what about mine?’. So you end up going back to those original bands again.

►Well, you had some heavy moments on all your albums especially the last. In fact, some of my favourite moments off ‘Rise’ are the heavier tunes such as ‘Take Me To The River’ and ‘Sun Deprives The Day’

Simon: Yes, the middle balls-out section of ‘Sun Deprives..’ is one of my favourite bits to one of our songs. And it’s so simple a riff – just as I said, ‘balls out’.

►So do you start with the riff? Is that how a Trucker song starts?

Simon: Yeah, we start with the riff and then develop the lyrics and melody around it. 99% of the time, if you have the riff, you will soon work the melody round it. Sometimes is a whole band thing and we work as a whole band in the rehearsal studio to get it right, bouncing ideas of eachother. But Tom also does a lot of work behind the scenes, writing material, then bringing it to rehearsals.

Jim: Aye, when it comes to Tom he may have a riff, or a set of lyrics or maybe even just suggests a theme. Then the rest of us chip in with lyrics along the way. So the core idea can be his, but it becomes a band song along the way.

Simon: We’re always working on ideas, especially when we’re away on tour in the back of a van somewhere..and especially when we’re pished. (cue laughter). And sure, 90% of it is shite, but the other 10% that Barry might catch on video, we can say later ‘wow, that’s actually a good idea..and then it manifests itself into a song on down the line.

► I suppose that’s the advantage of playing now, where recording yourself has never been easier, and has certainly moved on from a tape recorder in the corner of a room with a cushion over it.

Simon: Yeah you can record all your ideas..lyrics at 3 in the morning etc

Terry: The downside too though is that you can’t kid yourself you were brilliant when you weren’t cos there’s always proof somewhere and sometimes what you think was a good idea, doesn’t stand up to scrutiny.

► I am really excited for you all. I am so glad to see you back I reviewed you when you played your farewell gig here and I reviewed your comeback gig here as well and both gigs were very emotional.

Simon: You can’t keep a good thing down. We realised very, very quickly after we broke up, that this is what we do. This is our happy place. I left..and I guess I started the whole ball rolling when I left to dedicate more time to my daughters who have special needs. It got to the stage where I needed to make that decision to help out more at home. But it was my wife who first realised, very quickly, that I needed to be back in Trucker, cos I was doing her head in. ‘Get that effing band back together’ she said.

► Anything else you want to add? I mean, Tom’s not here so is there anything you want to say about him? I won’t tell anyone

Simon: No, seriously, we just love what we do. We love being in Trucker. We eat, sleep and sh*t Trucker. We get some time when we can switch off from it, unlike Tom who is just 24/7.I

And there you have it. A band who are constantly looking forward and, if there is any justice, will have a great 2017. What followed afterwards was a rip-roaring set of high octane Rock, and yes, a heavier edge was indeed in evidence, not just in some of the new songs on show (‘Over The Wall’ being one) but also the set list itself was tilted towards the heavier stuff. My head hurt the next day. I blame the noise (cough).

You can join the Pledge campaign here.