Berlin based Last Days of Elvis kick off a joint UK & Ireland tour with fellow Berliners Party Fears this week. The multi-national four piece released their debut album ‘Must Be A Mistake’ last month, a record which combines post-punk guitar work with electronic sounds and deep, thoughtful vocals. A band with an accomplished sound already, we’re excited to welcome them for their debut Belfast show on this Thursday night. We caught up with the band’s Andrew Stark to get an introduction to all things Last Days of Elvis.

Seán and I met whilst studying in Glasgow. We had been friends for ages and even lived together for a bit but never really got around to doing anything musical. Actually, that’s a lie, we’d get drunk and play Built To Spill covers loudly in the living room to annoy our flat mates. However, it wasn’t until he moved to Berlin that we actually started writing anything. We’d send ideas back and forth to each other and got a song or two written that way. I then moved over a year later and we wrote and recorded two EPs together. During the writing of the second one we met Tom and Jason and started playing as a full band.

People keep describing our music as ‘moody’ but, if I’m being pernickety (which I am), I’d say ‘pensive’ might be more accurate. Although, our live shows couldn’t be further from that I don’t think. A lot of high fives and high kicks. Nah, just kidding, I can’t high kick. I tried once. Just once.

I’ve always been a big fan of 90’s Shoegaze and Britpop which I think is pretty apparent in our music. My Bloody Valentine, Slowdive and Yo La Tengo have definitely had an effect, but of course you try not to just emulate your favourite bands.

I think we just liked the notion of excess that the name conjures up. It always makes me think of those mad sandwiches that Elvis was eating towards the end of his life, and any band name that makes you think of a sandwich is good in my books.

►How did the tour with Party Fears come about?

We met them after one of our shows and just got on really well. They floated the idea of a tour pretty soon after we first met actually. They’re just super hard working and great at getting stuff done which felt refreshing. Also, of course, their music is awesome!

►What are your tour essentials?

We’re actually having a competition to see who can bring the least with them on tour, Bear Grylls style. Just a penknife, a compass and a knowledge of the great outdoors. And maybe a travel pillow.

►Why the move to Berlin and do you feel the city has influenced the band?

I really just felt like I needed a change and moving to Berlin was a great way to mix things up. I think the other guys were the same. I didn’t really know much about living in the city before I arrived, but I think the first thing that struck me was a sense of freedom that I hadn’t quite experienced before. There’s just so much going on, so much interesting art to immerse yourself in. It’s also still relatively cheap to live here (although that’s changing thanks to folk like me), so you can spend a bit less time making money and a bit more time working on the things that you love which, unfortunately, don’t tend to pay the bills.

►You just released your debut album, how was the process of putting it together?

Pretty much the whole album was written, recorded and mixed in either mine or Seán’s bedroom. Jason then mastered it in his room while we all looked on, a little bit confused. The only thing that was recorded in the studio was the drums. We did them in Funkhaus Studios, this amazing recording studio that’s inside an old GDR radio station. The mixing process took a long time, we’re absolutely still learning so there was a couple of times I just decided to start from scratch again and do better. I really enjoy it though, you go into your own little world full of bleeps and bloops.

The response has been really positive so far. The hard part is just getting new people to listen really. I understand it completely, there’s so much new music around, so getting people so stop and notice can seem like an impossible task sometimes. That’s one of the reasons I’m so excited about the tour, just trying to reach new crowds.

Maybe a t-shirt and a copy of our album? Just kidding, but not really. I’m just hoping that people have a good time, we always do. I’m a big fan of Shoegaze music but that’s really not how we present ourselves. Despite what our music might suggest, we don’t take ourselves too seriously.

Finishing the album definitely felt amazing. We had been working on it for around a year, I’m not sure I’ve ever spent so much time and effort on anything before. There hasn’t really been a low point yet, maybe talk to us after the tour? I’m probably about to find out that one of the guys suffers from very violent night terrors.

Absolutely, there are loads: Mondo Fumatore (who will join us for our Scottish shows), Mincer Ray, Man Behind Tree, Mother of the Unicorn, Soft Milk, HAWK, Highest Sea, Von Liz. There’s also Fenster who are a bit more accomplished, those guys are great.

Last Days of Elvis play McHugh’s, Belfast on Thursday 24th August alongside Party Fears and Susie Blue. Entry is £5, or up to £8 if you want to support two touring bands. See you there. 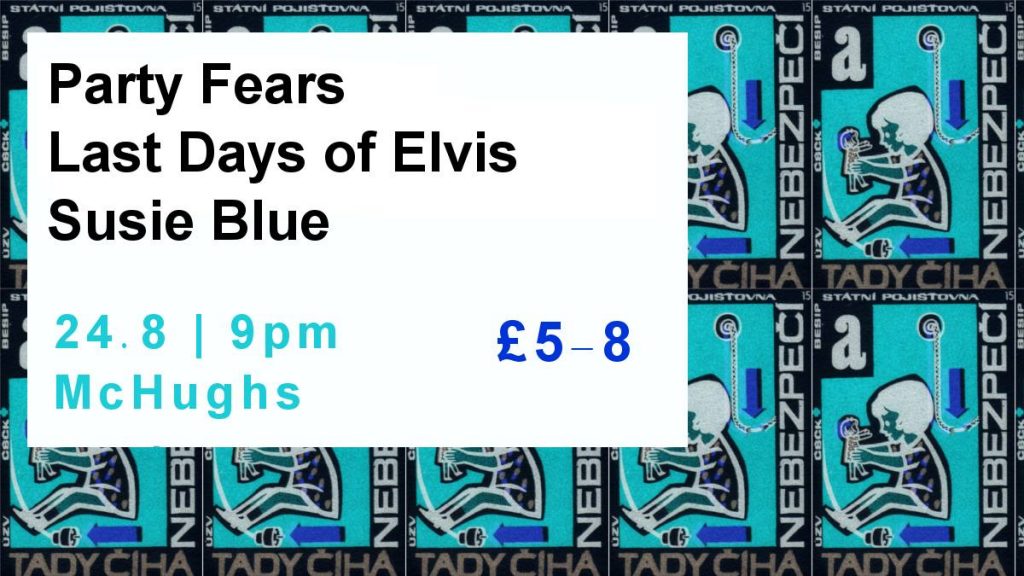