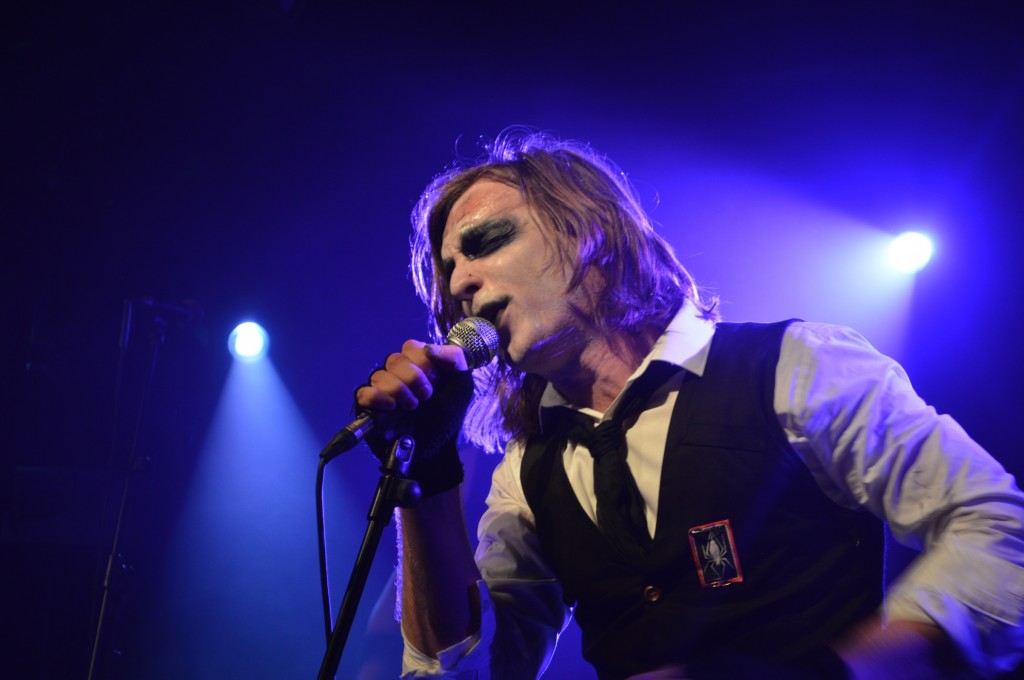 ▶ What’s the story behind your stage name?

Cadaver Club put the fun in funeral and our melodic horror punk will stick in your head like a pick axe. Our songs are catchier than the plague. I started playing bass when I was 14 and found myself in a band soon afterwards. We were knee high to the guitar cabs but we had fun and it was here I met the other guys in the band. It wasn’t until a long time after that we decided to form a band together. – Boom Chic Chic

It seems like I’ve been playing music for a lifetime, maybe longer. I’m an old soul and I like my music full of life and energy. I need it to keep these old bones animated.
Cadaver Club play hand clapping, toe tapping, finger snapping, leg cracking punk rock, loud enough to waken the dead. – Mr. Crowe

▶ What music have you put out so far?

We released our debut album A Fate Worse Than Life, through a PledgeMusic campaign in 2013 and followed it up with a live album Lunatics in London. We’ve also had a few singles along the way. – Dirge

▶ Is there a particular live show which stands out amongst all the rest?

As part of our album tour we had the honour of playing the legendary Hope & Anchor in the heart of London. We recorded our live album that night and playing the venue that had showcased the likes of the Sex Pistols and the Ramones was humbling. – Dirge

▶ What has been the highlight of the journey so far?

Both the album campaign and tour were brilliant. We received so much support for a brand new band and it feels like we have really built a community, or ‘club’ if you will. Everyone’s welcome, but you may never leave. – Draggle

▶ You are in control of forming a 4 piece ‘super group’ – who is in it and what do they do?

Mmm, Axl Rose on vocals. He’s one of the greatest rock singers and he’s well known for his lateness to gigs. With the funeral band in charge he can be the late Axl Rose and actually make it work for him – Mr.Crowe

Flea on bass as he’s such a versatile player that no matter what genre this super group adopts, he’ll fit right in – Boom Chic Chic

Keith Richards. He has a blues guitar swing that is utterly infectious. Plus there’s the added benefit that he died some decades ago, but no one has had the nerve to tell him – Dirge

Sounds like they need a drummer… Count me in! – Draggle

I would like to have Bruce Springsteen backstage to tell tales of general merriment but also to give us an inspirational speech before we take to the stage to get us pumped up. I would be eating Flamin’ Hot Cheetos and an Eddie Rocket’s strawberry milkshake to wash it all down, the finest in the world – Boom Chic Chic

▶ Who has been your biggest inspiration as a musician?

I have been and continue to be inspired by many musicians. Axl Rose, Gerry Only, Freddie Mercury, Robert Plant, Nick Cave and Tom Waits to name but a few but my all-time hero is John Lydon. His vocal delivery, attitude, passion, integrity, honesty and songs have been a beacon to me when surrounded by darkness and believe me, I’ve been in some very dark places. I mean, before you light the lantern in the Cadaver Clubhouse you wouldn’t see the cold, dead hand in front of your face. – Mr. Crowe

I think we just want to keep doing what we do but on a bigger scale. The more people who take solace in our weird little world the better and we have so much fun it would be a shame that more people didn’t get to join in! – Draggle