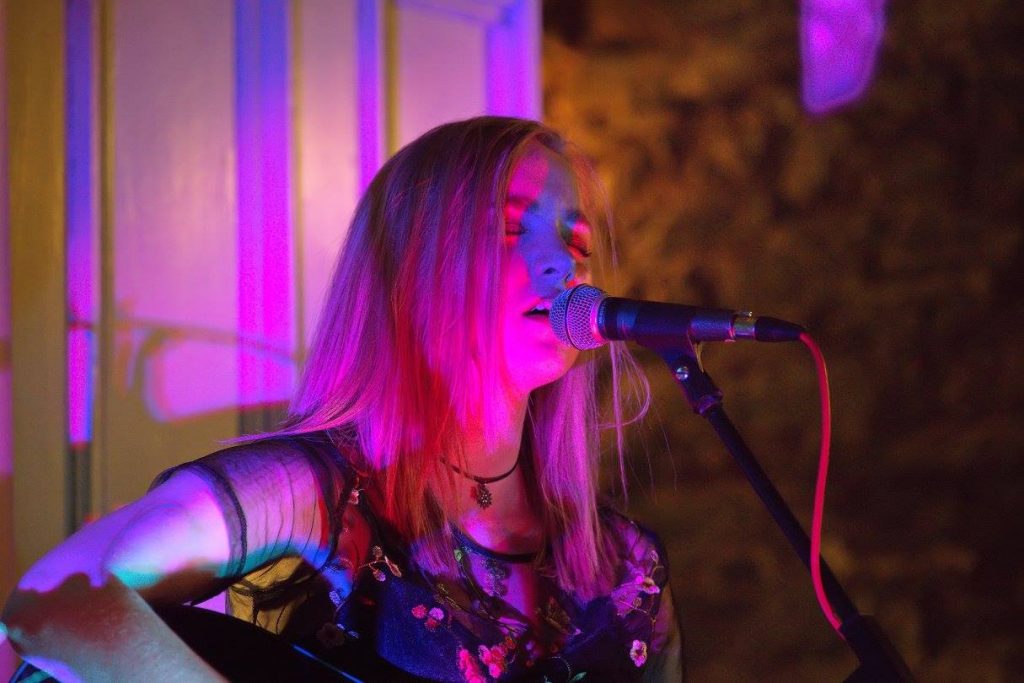 It’s quite simple – it’s my name! For a while I changed it to ‘Lucy Valentine’, it’s a family name and was recognised for music but I ended up changing it back after a few months. I wanted to build on my own name.

I’ve always loved music but I started playing music around 4 years ago. My eldest brother, James, came home with a guitar for his birthday and told me he’d teach me a few chords. I got lessons for a few months and then have kept it on ever since! My sound has been described as jazzy and alternative pop.

So far I have two original songs recorded and posted online on my YouTube channel [www.youtube.com/lucybell] and I intend to record more soon but I’m keeping busy.

I once played back up for ‘The Untouchables’ in a local bar/restaurant for a charity event. I remember the entire crowd started singing along with me and it was to this day the best feeling I’ve ever experienced. It was then I realised I could never stop playing music if I tried.

A highlight was definitely playing at Belnash Singer Songwriter Festival 2017. Being surrounded by so many amazingly talented people who all share a passion for music is something that’s difficult to forget. I think everyone has low points with music, obviously there were times I doubted myself – and still do but it’s through those experiences that I’ve bettered my music and skill. At least I hope I have!!

I have a huge interest in Film, Drama and Acting, so if I wasn’t perusing a career in music you could guarantee it would be in one of those!

Paolo Nutini, Hudson Taylor and Panic! At The Disco. They all put on a show and I’d love to be part of that.

I don’t know about strange but I’d have a fridge filled with ice cream – for emergencies of course. A saxophone player to play jazz music whenever I wanted and multiple cinnamon candles.

I think everyone in music simply wants people to hear their music. I’d love for people to take something from my songs, for them to mean something to them as much as they do for me. Although ever since my first proper live show a huge goal of mine is to have an audience sing my own songs back to me. I’d be completely overwhelmed.

I’d have to say Hudson Taylor. To me they are the type of musicians I aspire to be. That said I’m a huge fan of Paolo Nutini, David Bowie and Gabrielle Aplin and I can’t say they haven’t inspired me as well.

Yes for sure! Sam Wickens, he has an extraordinary voice with such pure and raw emotion seeping through in his songs and Ben Cutler. Ben is so young yet so incredibly talented, he works hard and he’ll go places.

I’d like to keep playing music and hopefully write and record a good few more of my own material. I’m always on the lookout for opportunities and events so hopefully one day you’ll hear my name or know one of my songs. That would be great.