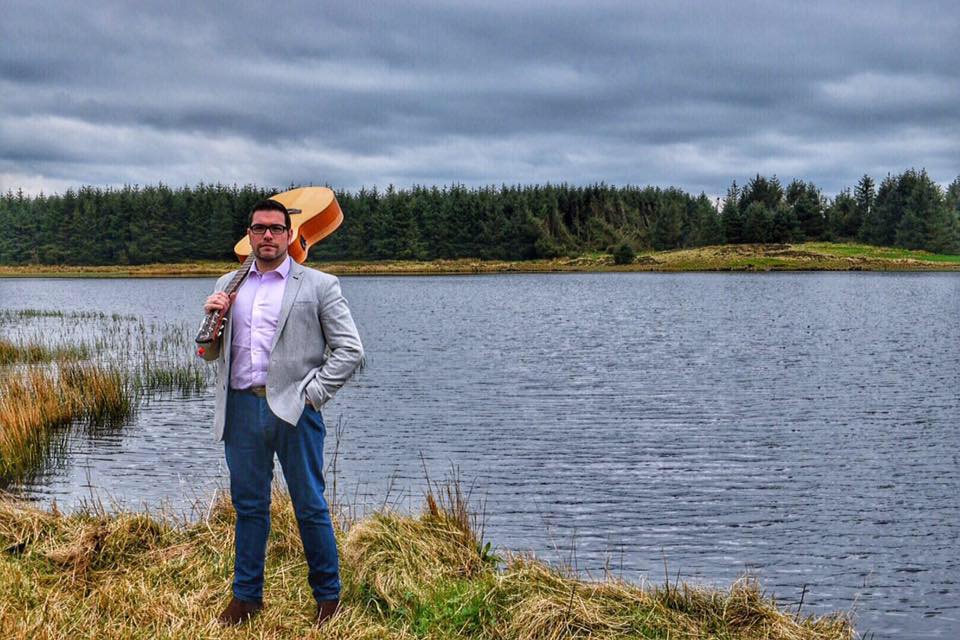 Really it says it all! It’s me, one Guitar, a PA and my set list. Less people to fall out with! I had contemplated a name but really James Bradley is what I’m known by or Jb by all my friends.

I wasn’t very sporty (the one always in nets!!) so at the age of 8 my Mum and Dad introduced me to the piano. I played for about 3 years and then gave it up! I could never read music. When my music teacher came, and I had to learn a new piece I would make her play it 3 times – then I would be able to play it from memory. On the 26th June 1995 my Dad bought me my first guitar. I had watched my brother play and was hooked. So really from there on I played, was taught and learned, and in 1998 started writing music.  My sound is a mix of genres! On the EP its recorded with a band so its Rock/Pop. I suppose its singer/songwriter RFP (Rock/Folk/Pop). My influences stem from American singer/songwriters, American/UK rock, Irish Traditional and Irish/American Folk.

On the 17th August 2017 I had the launch released my first EP “Better Place”. One of my favouite venues to perform in is The Market In, Draperstown, so it was a great evening with friends, fans and family. The Ep is a collection of 4 songs that I had written, from 2000 – 2017. It’s been amazing seeing it on there and hearing feedback, messages of support and also people sending me photos of my songs on their playlists. I also had the chance to record ‘Since You’re Not Around’ with Sessions in the House. The song was written about the loss of my brother, Alex, who died by suicide in 2005. I am very passionate about mental health awareness and suicide prevention and its importance in Northern Irelands society.

In June I was asked to support Amanda St John in McHugh’s Belfast. This was outside my comfort zone, as it was a gig where I had to play my own songs, and I usually hide behind my guitar and just play and sing people in pubs, clubs, receptions etc. Most of the other gigs were cover gigs, where I did play my own songs, but also entertained with the usual covers too. I loved the McHugh’s gig. The audience were amazing, and I really connected with them all. I was special to play and have the whole room silent and in my zone. It was a beautiful experience.

Highlight had to be my EP launch evening in Draperstown. I was frantic the weeks before – nightmares that there would only be me, my wife and the band there. So a week before my wife (boss, critic, mentor, supporter, beliver) was making sure everyone knew about the evening. I was blown away by the support, there was double what I expected and it was a most memorable night. Thanks to all who came along and to my wonderful wife, Janice.

Low’s I suppose really came from being pushed to make the decision to quite my full-time job as a retail manager, but this soon led to the high’s. I had been a manager for 10 years in a well-known grocery retailer, it had finally consumed me, I was anxious, convinced I couldn’t do my job and my family was suffering. I was lucky and got out of the rat-race. I now teach 30 kids and adults guitar, and do music therapy with my son, Daniel (8), who is non-verbal autistic. Daniel cannot speak, but sings. It’s a lovely way for us to communicate.

I love scenery, so I would probably do photography. I love taking photos and capturing moments on my phone (not very professional, but good craic). If I won the lotto – the four kids, Janice and I, would probably hire a big campervan a drive round the world. Think Big James!!!

Like any songwriter, each song we write has a message. Everyone takes their own meaning, and it is hoped that they can relate to each song in their own way. For instance, ‘Since You’re Not Around’ is about a loss of a loved one, and something we can all relate to. I hope that my music resonates with people and they enjoy listening to it. This song in particular had been noticed ny Kaz Hawkins and Aware NI, and I have been invited to play the ‘Sing For Aware’ in the waterfront hall on the 22nd September 2017. This is what I hoped to achieve, my music being played for a cause, and in this case mental health awareness in Northern Ireland.

James Taylor without a doubt. I aspire to play like him, and his voice, style of music, and playing is exceptional. I was lucky enough to see him in the waterfront back in 1997, he blew me away.

Really enjoying No Oil Paintings, Runabay and Waldorf & Cannon. Also check out Aria Sail who supported me at my EP launch. They are one to watch out for over the next couple of months.

So I’ve launched the EP and now I’m trying to get out and promote, Play and plug it. The Sing for Aware event will be big for me and also Sky TV want to work with Sessions in the House, so I’ll get a feature there too. Then it’s an album for release next summer. Watch out and Thank you.