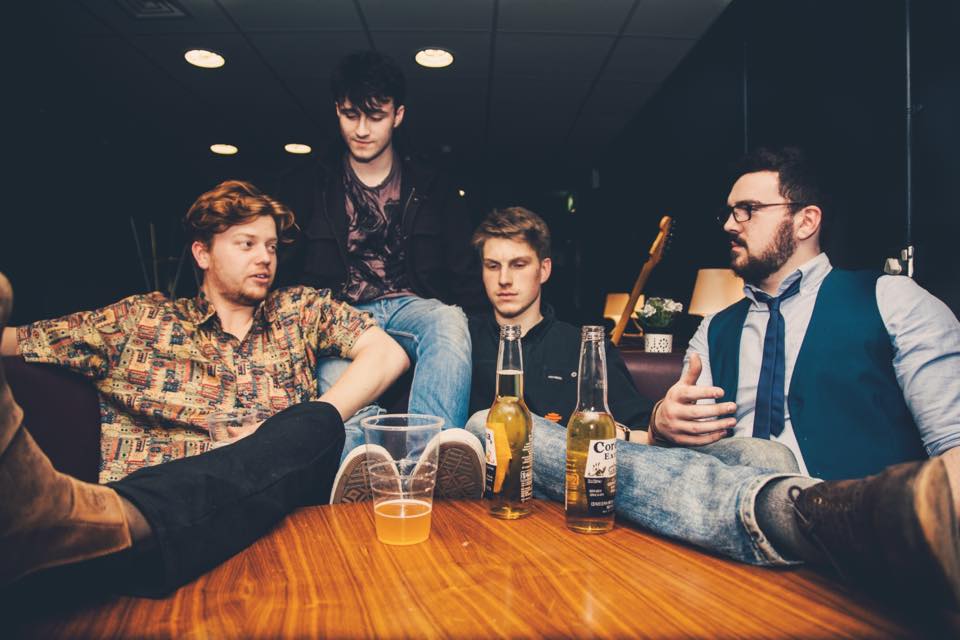 Originally it came about on a bus journey by playing about with two of the bands Kevin was listening to at the time, Fugazi and Foo Fighters. Having recently discovered Fugazi he had their album “13 songs” playing pretty much on repeat for that month and had always been into the Foo Fighters. After a bit of word play he came up with “The Fugues”. We did a quick google search to see what this word actually meant:

• “a contrapuntal composition in which a short melody or phrase (the subject) is introduced by one part and successively taken up by others and developed by interweaving the parts.”

• “A loss of awareness of one’s identity, often coupled with flight from one’s usual environment, associated with certain forms of hysteria and epilepsy.”

Not bad for something that Kevin came up with in his head! He then came to the rest of the band with the name. And so after months of struggling to find a name we were all happy with, we finally had a winner. It may not be the easiest thing to say back, but it’s us. Say it like the “few-gs”.

After a couple of chance meetings Kevin and Kaelan had the idea to start playing music together. From day one they knew they wanted to write their own music; but of course you need a full band to do that properly, and so the adventure began. Peter had been playing bass with Kevin in school, so he joined the party shortly after. Paddy joined most recently. We asked him to help us out for an upcoming gig at Mandela Hall after meeting him on a night out. He duly obliged and now here we are as The Fugues.

Genre wise we still haven’t pinned ourselves down and we don’t want to limit ourselves strictly to any genre, if it feels good it feels good. Since we only sporadically get to spend time and write music together, anything and everything comes pouring out, moving from the indie-rock mentioned above, to a more classic rock style, to a sometimes heavier punky sound. This year’s 4 singles are definitely more towards the indie side of our spectrum, the rest will come later.

So far, we have 2 singles released: ‘Early Mornings’, and ‘Sunshine’ with 2 more singles due to be out in the coming months so keep an eye out! Our first single, Early Mornings is a gentler song about those moments of peace that you can steal away in a busy life. It’s the sparsest song we’ve done to date with the exception being the bounding chorus. Sunshine, on the other hand is a more full, rhythmic affair that talks about life as a young person in the 21st Century; when interactions can be so fast and fleeting that they can sometimes mean nothing at all. It started out as a song featuring our view on the cracks in society until it morphed into a more all-round look at where we are today.

Our first show as a band will always hold a special place for us. We were asked to play for a night by one of the bigger student societies at Queen’s University. The 4 of us had been playing together for about two weeks at this point and we were asked to be house band for the BMSA St Patrick’s Day Trad Night Fundraiser. Our first gig and we know we’ll have people to play to, not bad! Well turns out there was a mix up in the booking and the Fundraiser had been moved to the Mandela Hall in order to accommodate the crowd. So that was a big one. There are videos of it on our YouTube page if you’re at all interested.

Other than that, it’s difficult to choose as we get such support at nearly every gig due to the Uni crowd we have following us who always seem to show up in good numbers!

The highlight is definitely the inception of the second half of the single we’re releasing in October/November: ‘Rubber Ego/Indigo Go’. It was pure feeling from the four of us, Paddy hit a fill and took the session through the roof. Very little has been tweaked from the first time we played it. It really is something special to us, one of those moments that you want to live in forever.

Low point is probably mostly individual but we have all had some tough moments in keeping the spirits up when we’re going through a slog or a break where members are away for a time. We imagine that’s pretty natural though, it just makes it all the better when we pick up again. We’re at our best when we’re together. All we want to do is play and make music.

Kaelan would probably spend it studying (read as drinking) to become the doctor everyone should avoid, Peter would be playing video games, Paddy would be filmmaking, and Kevin would be writing stories or computer programs.

We would really like to play at a festival, since we got together it’s been the big dream. Something about being where the only things that matter are the music and the people beside you makes that a goal we’re really chasing. We also want our music to give something to people: be it a good time, a different perspective or comfort. We live for those moments of connection.

Family and friends always play a huge role and anyone who shows an interest, learning words to our songs to sing along, giving us great feedback, even telling us when they don’t like something if needs be, will always push us to do more. Everyone that turns up to our gigs and fully engages in getting together for a good time inspires us in ways you can’t imagine without being there yourself. It’s why we write songs, it’s why we play gigs. We wouldn’t be musicians if we had no one to play to. It really is that simple!

Our buddies, Hunkpapa and BRøR are great! They’ve been gigging about the place over the summer there and we always have a good time at their shows. The Plasticine Porters have just released their EP: “Train of Thought” which is fantastic but you really should see them live. Kevin has been listening to a lot of ROE recently after seeing her Glastonbury BBC Introducing performance so he’s putting in a shout out for her. All very talented people.

After these singles are released in the next few months we’re back in the studio with some interesting material for the New Year that we’re excited about. Then who knows? Festivals? Cramped Car Journeys? A World Tour for the Fugues? We’ll wait and see. Thanks for having us!