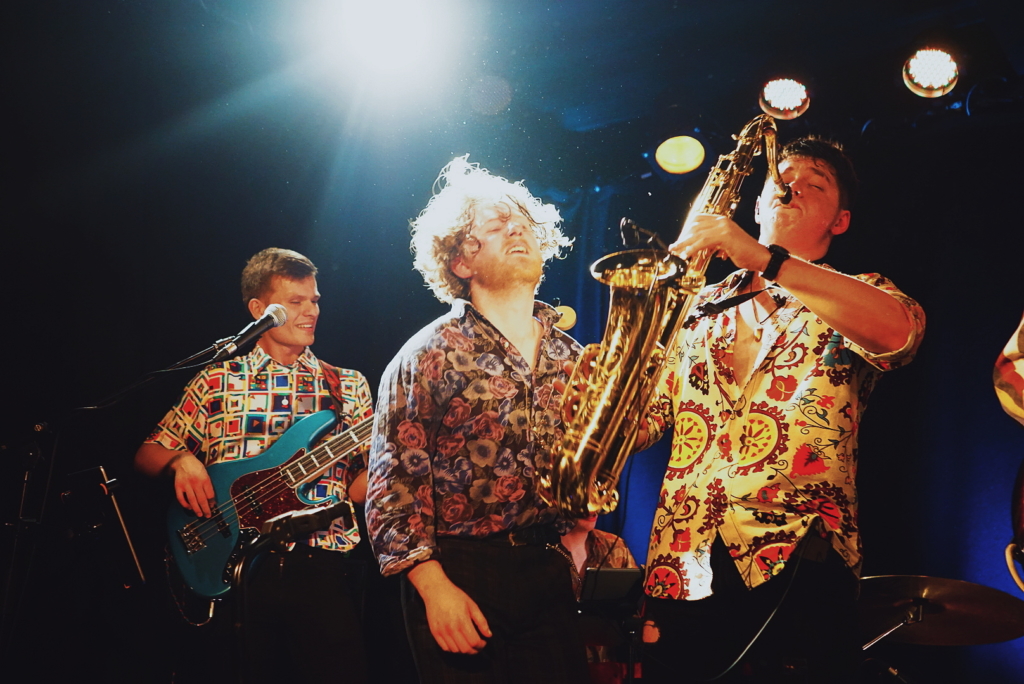 Little over a week ago, Matty Burke got onstage in a bustling Black Box with little fuss. It was Anna’s Number’s now annual showcase with their frontman (Burke) supporting in what was to become his first show playing original music. From the edge of a full room, chatty and excitable, busy with the buzz of old friends, new acquaintances and those who rushed from the ends of late evening shifts to make it in time, Burke watches. Kind and laid-back in the everyday, when it comes to music and to performance, the man doesn’t miss a trick. He grabs his guitar, surveys the crowd for a half a moment, nods once and the band eases rhythmically into the opening notes of ‘Malibu’ without a word.

Who is Matty Burke? He appeared rather casually onto Spotify at the turn of the new year, hitting 30,000 streams on his debut single ‘Sing Me to Sleep’ in two months without the budget of professional marketing. His face is most familiar in the Belfast music scene for fronting funk cover band Anna’s Number, who seem to have single-handedly taken over the entire wedding band industry in Northern Ireland in the space of a few short years. However, despite dipping between bands for the last seven years, Burke stands apart in his ability to arrange and construct a simple melody into a complex delicious mix of chords and beats with cool precision. He is good at what he does, he obviously loves what he does and, contrary to what he believes about himself, he is probably the most humble musician in Belfast.

After penning, editing, altering, mixing, remixing, recording, rerecording and remastering his full debut album, the fruit of Burke’s works is finally becoming ready for public consumption. But, slowly, one song at a time. This gentle withholding of the Burke of the studio however does not bleed into his stage presence. He stands easily, planted central and his sound swells to fill the room. He does not pander to any audience, but he knows they are there, invites them in and somehow wordlessly, they know he knows and oblige. The playful bantering of the band’s horn section, made up of a very charismatic Zacc McGloughlin and Jack Riordan, dancing together between bars pulls the warm atmosphere of amity closer. The band, comprised further of Peter Close (bass), Jamie Hewitt (drums) and Matt Evans (keys) has a distinctive skill and flare, but Burke wrote the recipe – and he holds his own as he sings the words and strums the chords that could not be anyone’s but his.

He speaks a gracious welcome as the first song (‘Malibu’) closes, chatting easily to the room as if only his closest friends we present and it was not a sold-out venue filled with 240 people. He thanks a friend for making the t-shirt he is wearing, dedicates the next song to her and with little mention of himself he launches into a full-blown arrangement of ‘She’s in the Vineyard’. Each of his songs have biblical connotations, each ‘love’ or ‘you’ is or could be interpreted in the most abstract sense and this sets Burke apart in the Belfast music pool. He writes outside of himself as well as from within. Along with this, he places a depth within the musicality of each of his songs as well as lyrically; somehow, even without the lyrics, you know what they are saying. Is this transcendentalism?  And then there are speechless moments, like in ‘Storm’s Eyes’ when it opens up into a ska jam in verse three for little reason other than these musicians can and do do it well.

The most moving, if not notable of Burke’s discography is ‘Evergreen’. This song, a poignant favourite amongst Burke’s friends, delves into a reflection of vapid impermanence, teetering on the cusp of the divine. It seems trite to label it a ‘love song’, for this love seems large and overcoming, an impossible light in the dead of mid-winter, it pulls at the melancholic but then vanquishes it in a humbling grasp for hope. If Burke sounds like any one of his own songs it’s probably this one. And for a second, the air could almost hold still, the crowd could collectively sigh soulfully and stand in resonance of what they heard. It doesn’t and they don’t but that is beside the point. This song is beautiful.

Burke closes his set with his now well-known debut, ‘Sing Me to Sleep’ and this first live performance of his single is greeted with an audience who sings his lyrics back to him, loudly and sure of themselves. The instrumental solos for each section of the band allows Burke to fulfil his favourite task of crediting his friends for their input, but he cannot shy away from the thing he has created.

That should be it for Burke and his band mates, set finished, well done, but there seems to be no rest for the talented. After a short break, Anna’s Number assemble and despite having swapped their chic white t-shirt look for garishly funky dad shirts, the set-up is quite familiar. Belfast seems to have acquired it’s own musical collective rather naturally in this little genre-d nook; again Peter Close, Jamie Hewitt, Zacc McGloughlin, Matt Evans and Burke himself slip into position and begin set two of two. What follows is a dance party of the sweatiest degree with a setlist comprised of now staple covers that couldn’t be prised from the hands of the band (‘Star Girl’, I’m looking at you) and upgraded mash-ups; ‘Gypsy Woman’ meanders into ‘South of the River’ and Bruno Mars’ ‘That’s What I Like’ seeps into ‘My Name Is’.

Dedications and guest musicians come and go in their ample masses; the elusive Tripod raps Slim Shady’s famous riff, Jack Riordan returns for a second helping of his on-stage bromance with McGloughlin, Bramble Jam’s Conor Adams allows Pete Close the rare opportunity to engage fully with the crowd by taking over on bass for ‘Superstition/Another One Bites the Dust’ and ‘Tequila/Don’t Stop’ whilst Sasha Samara arrives in time for a 3 song feature on covers of  ‘Valerie’, ‘Young Hearts Run Free’ and ‘Juice’. Anna’s Number meld through the fourth wall between stage and audience, dancing into and with the throng of people who flood to them. It is very warm in the windowless Black Box and the sheen of sweat and adrenaline crescendos into what can only be described as a kind of musical fight club with Burke and McGloughlin at the centre of a chorussing circle for ‘Minnie the Moocher’.

The theory of the collective takes shape when the band begins their thank yous; to their friends in sound, in lighting, in photography, to the people who they love. There is a community of people who make and do here, on this night in Belfast. They are the little gold rush waiting to be discovered and they pool together and build each other up. The band, now returned to stage play their encore, a Burke favourite, “Johnny B. Goode” and then, the afterglow. Ruddy faces and empty cups and a humbling putting away of equipment soundtracks a dispersing crowd which flurries away into the night like the first snow of the year. Post-gig is an odd time in the evening – everything dissipates, but it happened and it was good and when feet hurt from dancing so much sometimes this is evidence enough.