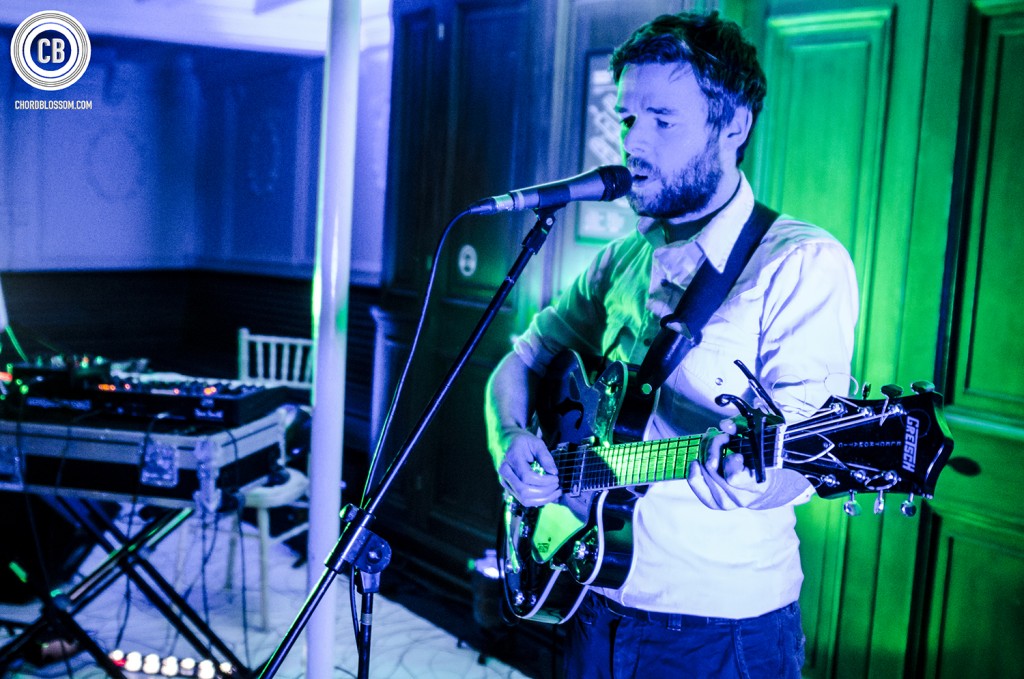 The Ulster Sports Club hosts another evening of indie lo-fi music for its tote bag carrying clientele. It is a cool venue and on a Friday, despite it being an early 8 pm, an attentive keenness hangs in the warm room which fills out steadily with pensieve head boppers. The general gig in Belfast is something that is becoming a little formulaic in expectation.

Aaron Shanley sets the tone for the support acts; short, sweet, a little on the mellow side. Both his and Buí’s sound, whilst distinctly from a Belfast in the now, show the wider influence of the indie sad boys of the American midwest. Whether generational or situational, the thematic universalism of feeling a little bit hopeless permeates through the pink and blue stage wash lighting.

Buí tugs at the nostalgia around the heartstrings and the nods in the crowd are not just in time with the drumbeat, but in agreement with the sentiments vocalised; “take me back to a time”/ “running around in these circles is not what I want” / “give me something else to think about”. The ennui of our time and place is something sung about constantly – whether by the likes of New Jersey’s The Front Bottoms, the soft Belfast accent of Buí’s Healy or the more country-twanged Shanley. This existential confusion of “I’m ready to go / one more step and I’m dreaming” without any promise of definite uplift or hopeful ending is relatable to the crowd who stand, perched and listening, even in the midst of their hushed chatter. Despite the end of week timing, it seems Belfast’s music crowd will not shy away from a philosophical questioning.

The main event, of course, is Arborist. Headed by Mark McCambridge, Arborist have been in steady circulation since 2013, releasing the lyrically landscaped debut album ‘Home Burial’ in 2016. Their mournful melancholic folk carries through to their 2020 sophomore album ‘A Northern View’. The moody, rural imagery of McCambridge’s songwriting matches his chosen alias meaning “tree surgeon”, for the archaic landmass he repeatedly describes could only be Northern Ireland. The combination of the dark, the dismal and the hopeful light sounds both in words (“I can sense something growing / up through the dirt”) and in the instrumental. On the small stage under LED backlight, there is a call to the natural and the very presence of a full string section ties the traditional to the new cool Belfast sound. There is a real sense of the story-teller in the songwriting here; his “I remember watching” feels like settling down by a fire and listening to a tale of the old familiar. There is an agedness and a rooted grounding in Arborist that does not yet exist in the previous acts, a painting of new light over the old ennui. ‘Here Comes the Devil’ stings gently, but still a twinkling of starlight can be heard in the background.

The live storytelling in ‘Taxi’ stands out sharply as an interesting turn from the pastoral semantic field carefully weaved throughout the performance. It is a personal account of an old relative and an anecdote which touches on the political (“there year was 1967/68”) the aging of a parent, the changing times (“black and white photographs”, “school cane”) and those more stoic (“solid grey sky…still doesn’t change much”). As a song, it meanders, but it is in these tangents and in its lulling 5-minute retelling how Thin Lizzy came to record ‘Whiskey in the Jar’ that ties the nature of the Northern Irish to their landscape. Even in the undeniable setting of the old sports club stage, McCambridge is able to captivate and hold an audience as he tells a story. Had his string section not been moving and breathing round him, he could have been any layman telling a tale. The soulful narration, pulling to a halting end with characteristic bathos (“What the fuck was that all about?”) hits a theme of every song played tonight. The call we send out may very well have a disappointing answer, but is it not better to ask with hope?