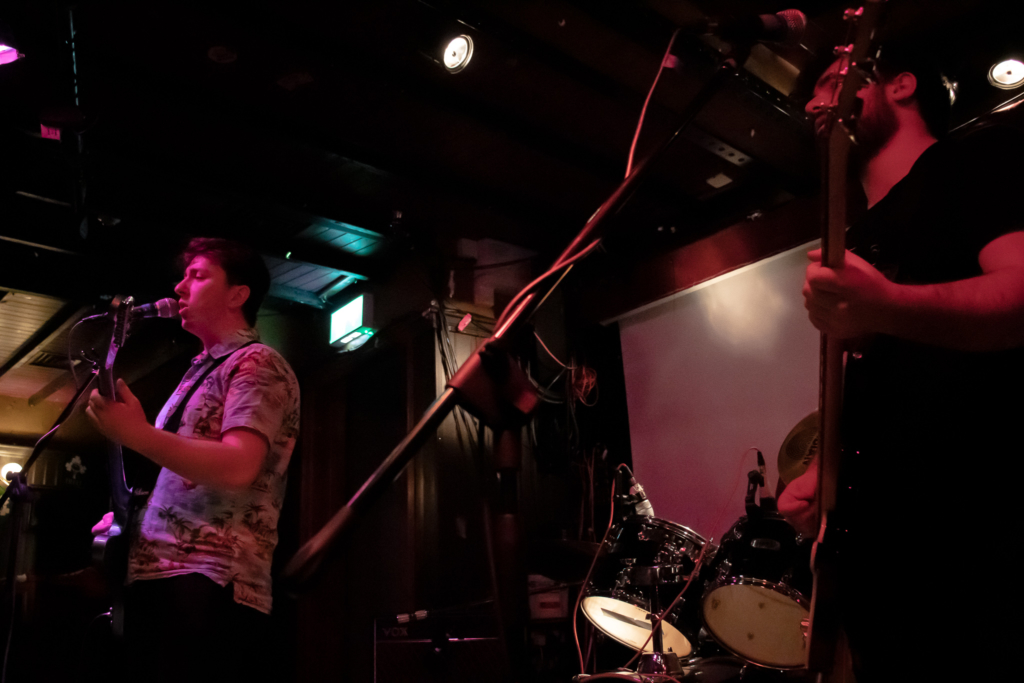 “Are you being serious.”

Business as usual then for the McHughs basement.

A common haunt for my person these days (I’ve seriously considered paying rent), the absences of the five-piece is all that bars my entry for what is one of Belfast’s most interesting spots. Quick intervention from the bar staff prevents my weary legs from collapsing before I make my way further inside, creating in the musk. It’s good to be home. The oldest building in Belfast sees a return of the live music scene, welcoming Belfast rockers Baroda & friends for the night. The former introduced themselves to me on the blistering shores of the river Danube. The latter have the chance to present good first impressions.

Performer Conor Martin is the opener for the night and the first to take the stage with an acoustic. He’ll not be the last. Alone on stage, the singer begins his acoustic set with a weighted, thick strumming. Instantly recognisable, his solo performance has a simplistic pleasure to it. A distinct country, rustic vibe with indie lyrics ensures a vibrant and varied set that would charm the most cynical of hearts. Choruses infused with the spirit of Brit-pop and an all too familiar strumming pattern gave the nights opening act the same warmth of an old friends arrival. Charming and poppy, the troubadour was the first of a trio of enjoyable acts.

The middle act of the night comes in the form of Dylan McIlwaine. Baroda frontman Neil Goss informs me he is a “top bloke” and a regular performing partner of the indie trio. I settled shoulder first into my pillar as the second solo act sauntered on stage. Distinctly more upbeat than his predecessor, McIlwaine was keen to display his more rebellious spirit. Chords were hit with a fierce strength, reverberating in ways that are normally alien for an acoustic act, while the primal exhilaration that lo-fi sets are known for became more prevalent with each moment. Bob Dylan and Stone Roses covers aside, McIlwaine performed a fierce set that combined the fierce pub singer spirit with an indie rock bite.

Headliners are my Hungarian co-travellers Baroda. The deceptively heavy indie-rockers commenced their set with a number of body swaying solos and a mature, potent live sound. Breakdowns and distortion aside (there was plenty of both and they were equally enjoyable), their sound has an undeniable room-filling potential to it. They had an easily accessible bounce to them, while a mature and sophisticated ethos kept their sound fresh and interesting despite their indie rock label. Rocky and groovy, their mix of new numbers, EP favourites and covers had a noticeable impact on the room, garnering the largest cheers and most believable applause of the night. Wry, deep percussion and steely guitars had hairs standing on end, with plenty a hand in the air in adoration before they took their final bow of the night. Another memorable night in McHughs ending with a bang. Business as usual indeed.