One of the best things about Belsonic through the years has been their willingness to give opportunities to smaller bands to showcase their talents. This privilege tonight falls with the hotly tipped Cast of Cheers. They have been likened to tonight’s headliners Two Door Cinema Club and are even set to go on tour with them later in the year. The indie electro rockers get the crowd warmed up by unleashing their standout tracks ‘Human Elevator’ and the delightful ‘Animals.’ The Cast of Cheers put on a great set and the Dubliner’s reputation is sure to grow and grow.

Second on the bill tonight hailing from New York are Oberhofer. Similar to their predecessors they can also be classed as indie rockers. They have a Vampire Weekend style vibe and give a very energetic performance. Lead singer Brad gets a bit carried away and climbs on top of the amps on the side of the stage before running through the press area, but hey there is nothing wrong with a bit of enthusiasm. The most enjoyable track of the evening is the catchy ‘Gotta Go’ but ‘I Could Go’ also gets the crowd bouncing along. Despite a few dips in the set, the Oberhofer boys can be very pleased with this Northern Irish debut.

The penultimate band this evening are Noah & the Whale, and it is a special evening for them as it is their last night of touring before they go off and write their next album. Opening up with ‘Life is Life’ they get a fantastic reception as the young audience lap up their performance. Tonight’s set list is not surprisingly dominated by tracks from their very successful third album ‘Last Night on Earth’ which most of the crowd is familiar with. They do have time to squeeze in ‘Rocks & Daggers’ which features a lovely slow acoustic start that builds up into a foot stomping hoe-down by the finish. The song that really encourage crowd participation is ‘5 Years Time,’ which stills sounds as good as it did back when it was released in 2007. Their set is quite short and personally I would have liked them to have played a few more songs, but they leave the stage to ‘L.I.F.E.G.O.E.S.O.N. which proves to be a real treat for the quite significant crowd. 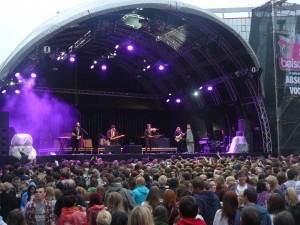 Two Door Cinema Club come out in a blaze of strobe lights to a raucous cheer, it is safe to say that they are one of the most popular bands to come from Northern Ireland. The Bangor lads have been seen their stock rise and rise all around the world since their debut album ‘Tourist History’ was released. The young crowd go wild once they hear opener ‘Cigarettes in the Theatre’ and the mayhem only continues when it is followed up by ‘Undercover Martyn.’ You get the distinct impression that Alex, Sam and Kev are happy to be back in Northern Ireland, playing in front of many of their friends and family. Tonight’s crowd are among the lucky few to hear a number of the new tracks for the first time live and even on this first play it seems that they have another hit album on their hands. All the new tracks played: ‘Next Year’, ‘Wake Up’ and ‘Settle’ were positively received by the crowd. Latest single ‘Sleep Alone’ was predictably a success and I would be willing to bet that ‘Handshake’ will be the follow up with its standout chorus “the devil will want you back and you’ll never find love in an open hand” being sung right back at the band. Like any band with a new album due for release, the guys are clearly aware that the best reactions come from their older material. Squeezed among the other songs from ‘Tourist History’ is B-Side ‘Costume Party,’ which is lapped up by the more dedicated fans among the Belsonic crowd. The airing of closers ‘Come Back Home’ (particularly apt tonight) and ‘I Can Talk’ manage to turn a packed Custom House Square into a huge dance floor for once last time with everyone bouncing around. Mind you I would be telling a lie if I said that I wasn’t doing the same… 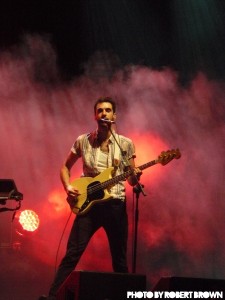 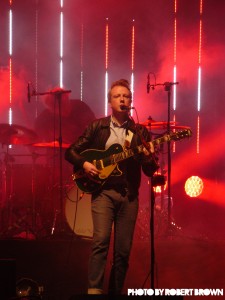 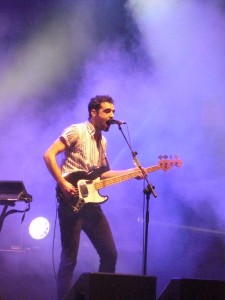 It is a flawless set from our local heroes and indeed there was only one thing that went wrong during it; their guitar tech threw a guitar to Alex who failed to catch it. Apparently this was the first time in over a year that this move had failed, but it did give the crowd a bit of a laugh. On a more serious note there is nothing more satisfying that seeing a local band headline one of our own festivals but in the not so distant future there is no reason why Two Door Cinema Club can’t be headlining the main stages at the likes of Reading/V/Isle of Wight festivals.