by Carrie Neal
in Live Reviews

I went to the Limelight 2 for the recording of The Bonnevilles’ first live album. The night had quite a different atmosphere from a usual gig, perhaps due to the collective thought that once the live album was printed that everyone attending can say they were there, present during the production. I think that makes it extra special.

Escobar were first up to tantalise the audience in the build up to the live album recording. Starting off the excitement for the evening with a lot of heavy rock and very bleached hair. Their sound was reminiscent of early ‘My Chemical Romance’, and the band brought a lot of energy to the stage. They were a rambunctious lot and the audience reacted to their vigour. 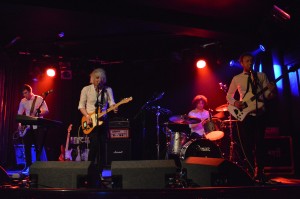 Then it was time for Dutch Schultz to rock the Limelight, and I can assure you they did. The lead singer sang his heart out and the crowd responded with a lot of enthusiasm. I may have even seen some helicopter hair happening, yes, the bass and drums were that good. It was a very lively performance; their heavy rock style could easily be compared to that of ‘Therapy?’ and they had a similar vibe. 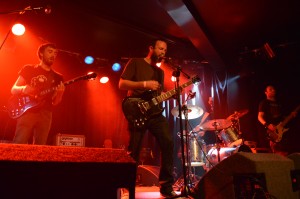 As the main act of the night approached I saw an influx of people coming through the Limelight doors, the crowd wasn’t all that bare before but as The Bonnevilles took to the stage there was a surprisingly large audience for a Wednesday night.  This is the first time The Bonnevilles have played the Limelight 2 since the launch of their album ‘Folk Art and The Death of Electric Jesus’ in November, so their return to this venue was long overdue. Lead singer and guitarist Andrew McGibbon Jr introduced the set and jokingly asked the audience not to mess it up, as the recording will be forever immortalized. Chris McMullan took his place on the drums, and the venue erupted with a rocky, bluesy, garage funk. It was funny to see how the dancing style of the audience changed from head banging to dancing merry jigs. 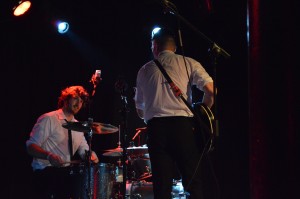 They played a much demanded encore finishing off with one of their most popular songs, ‘Good Suits and Fightin’ Boots’. They’re currently writing a new studio album to be released early next year, so the live album should tide us all over until then. Walter D’Goon (who worked on their previous album) recorded and is mixing this live album and it will be available in a limited edition vinyl, the band might even sign it for you if you request it. It was a very spirited gig that is sure to come through on their final recording, so if you want to know which songs made it onto the live album (including some new stuff!) you’ll just have to go buy it to find out. 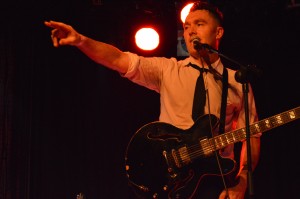