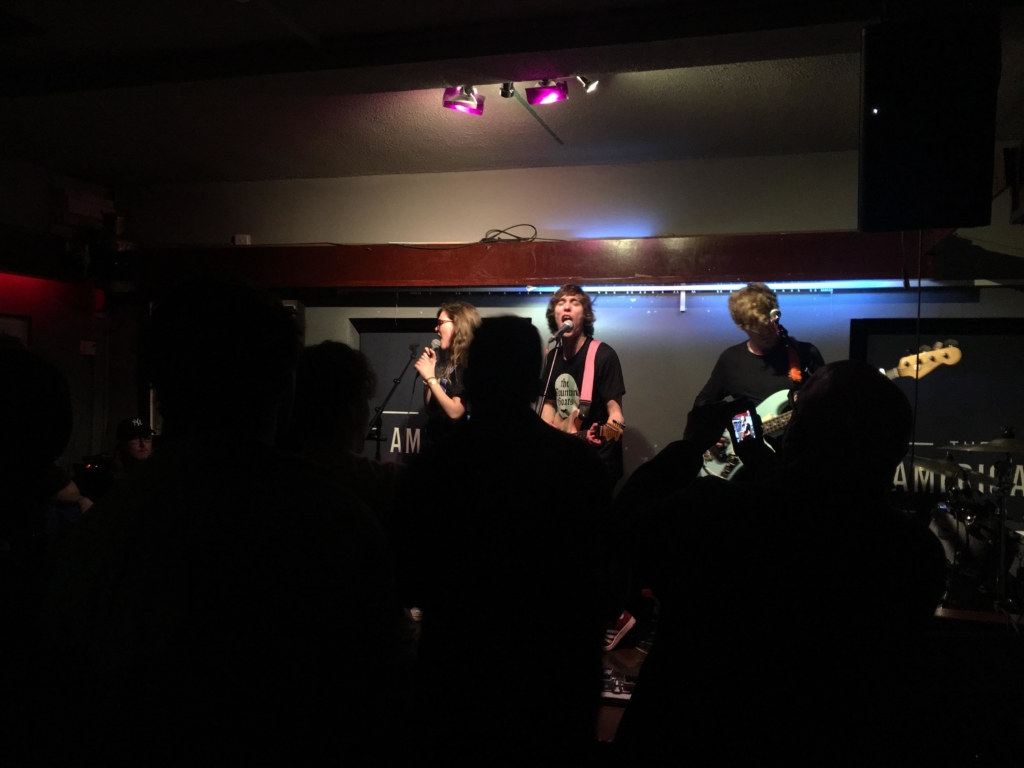 My entire body is somehow rigid and shaking at the same time. I can feel goosebumps travelling down my arms. Sweat starts to pool on my back.

Fun Fact: The show was about two hours from starting. I was sitting in my car outside, having a heart attack. I’d just narrowly voided crashing into a lorry (didn’t have his indicators on, the prick) and then a traffic pole (emerged from the shadows like a Balrog). Good start.

I manage to collect myself and vacate my vehicle, headed for the relative safety of The American Bar, one of Belfast’s better-kept secrets. This cosy boozer has played host to some of the best talents in the city (Joshua Burnside, Villers and The Villans, Malojian etc.), a fact hidden behind its quiet demeanour and unassuming facade. As I enter, football scarfs hang from the rafters. A couple chats loudly about everything and nothing. A lone pensioner sips a frothy beverage. The door in front of me has a single, handwritten note pinned to the glass:

I glance at my watch. 7.53 pm exactly. Less than seven minutes before the North Coast quartet open the first of a three-night residency in Sailorstown. It won’t be this quiet for long.

The door is flung open at 8:02 pm and I make my way upstairs, one of a handful who has arrived this early. The venue is a far cry from the Olympia Theatre in Dublin where they opened for Snow Patrol, and yet it feels much more suited to brand new friend. The low ceiling, flickering lights behind the bar, the squeaky floorboards, it all fits them much more than the grandeur of the large stage. It’s a high character room, so it only makes sense that the acts reflect this. The character quality is increased when, before long, frontman Taylor Johnson joins the room for his pre-show tradition of making sure everyone in the room gets a hug, our faithful reviewer included. We chat briefly, about the setlist tonight (a selection of fan favourites, recent demos and unheard material), the opening act (TJ seems more excited to see them play than to actually play himself) and the near misses we both experienced on the way here (my brush with death, bnf nearly setting up in the wrong bar a few doors down.)

The room is nearly half filled by the time we’re finished, and TJ nips back to the green room to gather the band as the opening act takes to the stage. I sip my alcohol free Erdinger (an all too regular occurrence these days) and position myself three feet from the foot of the stage. I’ve been informed that I shouldn’t miss a minute. I was informed correctly.

The Mannerly Hoods saunter to their mics with a swagger that suggests that they were headliners tonight. The room surges forward with anticipation, as all of bnf huddle on the left side of the stage. Opening with ‘I’ll Eat My Soul’, their gritty, pub rock spirit comes into sharp focus. Known locally for their anthemic vocals, each verse comes out like a crescendo. Inhabiting a comfortable middle group between punk and indie, from their head-banging choruses and fist-pumping hooks, the rough feel to the Hoods is utterly addictive (“Upa Hoods” – Aaron Milligan). Pumping an oddly nostalgic sound, one that brings to mind The Ramones, The Clash and The Pogues, the Hoods compelling mix of delinquent attitudes and unabashed rock and roll joy is a thing of pure enjoyment.

After a brief recess in which the hoods exit the stage to a chorus of “ONE MOAAR TUNNNNE’s”, we get the chance to catch our breath before bnf. They’re eager to get on stage and get started. Lauren Johnson, the dual vocalist for the band, admitted that she felt slightly tense prior to the start of the evening, but would be fine once they got on stage. TJ is noticeably absent however. Probably busy listening to ‘Decay’ in the green room for the 78th time of the evening. Nevertheless, the lost guitarist soon makes his appearance, dancing and singing his way through the crowd singing along to General Fiasco’s’ Rebel Get By’. He’s on the stage for all of about 13 seconds before they open up the show, their brand of indie rock pop taking the room by storm from the first lick.

Remarkably tight from the get-go, their sound is a deceptively fierce one. TJ is a natural frontman, all shaggy hair and charisma, and the band follows suit. A collection of searing, breakneck riffs, mischievous vocal hooks and razor-sharp percussive fills has the walls of The American bar sweating and a sea of heads and hands thrashing. Even aside from their sound, however, bnf have managed to balance having four magnetic stage personas at the same time. If you focus on one member for too long, you feel as though you are somehow missing out, as each have their own quirks which adds to the lively nature of the show: be it Taylors wide-eyed enthusiasm, Laurens dad dancing, bassist Aaron Milligan’s frenetic hands or the punch of drummer Luke Harris’s bass drum.

Even while I stood taking notes, I was barely glancing at my notebook for fear of missing something in front of me. Debuting new number ‘Bear‘ and performing latest single ‘I Was An Astronaut‘ both ensured large cheers (TJ barely has to sing the vocals for “I’m a mess, but I’m your mess”), but it is the artfully punkish ‘GIRL’ and ‘Milk Chews’ that garner riotous foot stomps. An energy that brand new friend were only happy to match.

Never one to shy away from surprises, brand new friend hit us with something I don’t believe I’ve ever seen from a local act. A proper encore. First time for everything I suppose. Returning briefly to blast a further twenty minutes of pop-punk melodies and rock riffs, the sound of bnf embodies their spirit. They just want to have a good time and want you to join with them. An innocent goal, but one in which your hapless reviewer found himself all too willing to be thrown into. The night ended much as it started, my body taught with adrenaline, sweat pooled in places I didn’t know existed. I’m sure brand new friend wouldn’t have it any other way.