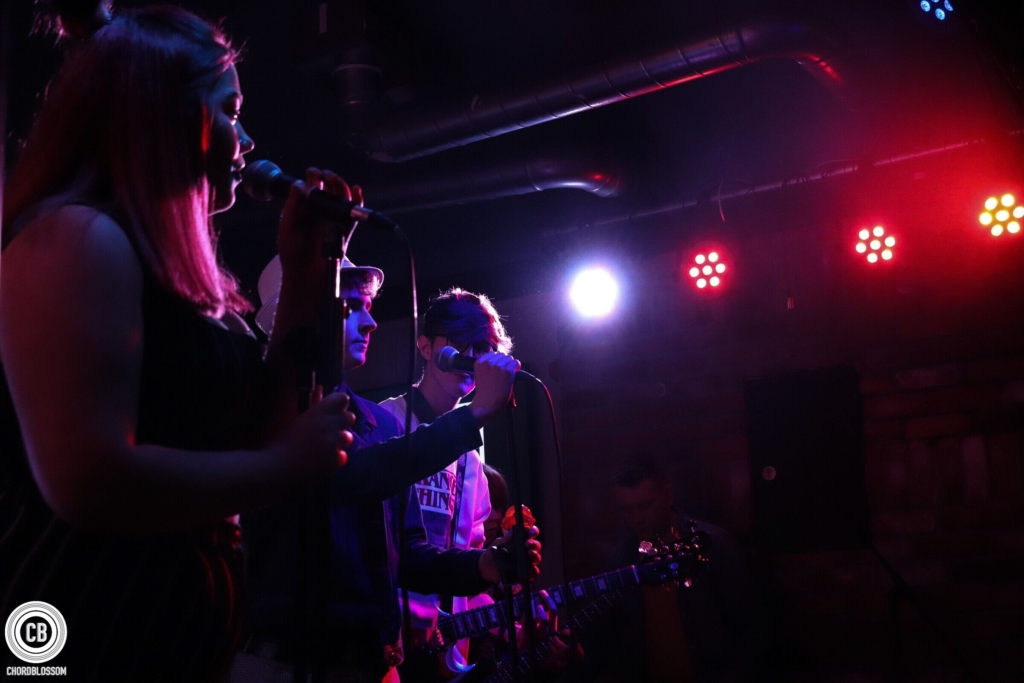 I‘ve come to find in recent months, that if you’re not at least an hour early to the shows you see, you’re not doing it right.

This was my first time in the Nerve Centre.  I entered the building through the side door (the front was locked) and was greeted with blasts of colour.   Excitement and anticipation for the night to come began to build. You see, this was a ‘Why. Gigs’ show – a name to know in Derry for some time. Well planned, sold out, something everyone had been waiting for. Continuing my journey through the building, I ventured up the stairs to the right of the ground floor. Famous faces were printed across the venue. The walls were covered in photos of local legends and of those who have played there in the past.

When doors opened, I was already deep into prepping my camera. The mood of the room quickly changed as lights were dimmed and multiple televisions were broadcasted with ‘ Why. Gigs’. Tickets were scanned and people began to pour into the venue. The atmosphere drastically changed from empty and lifeless to packed and powerful.

Vanilla Days were the night’s opener. Fairly new to the scene of Derry, the 7-piece were performing their second ever show that night. The vocals were perfect for a cover of ‘Love Will Tear Us Apart’. Voices could be heard singing back to the band, and smiles were spread across the performers faces.  Then came ‘Toxic’ by Britney Spears, which garnered a few laughs from the crowd. The vocals of the two singers were perfect in contrast, giving the tune a never-before-seen twist.  Vanilla Days finished with ‘Freebird’, and although cliques of people were spread around the room, it felt as though the music performed brought the everyone together. I was surprised that an opening band could gain such a reaction from a full venue. The room was filled with such positive energy.  I know if I was a gigging musician, I’d strive for my second performance to be as good as theirs.

The room emptied as Dreamreading set up. From Bangor, the boys were strangers to the people of Derry. Not only was this their first show in the west of the province, but like Vanilla Days, this was their second ever public show. These last few months have been booming with activity, however, with new fans of the band numbering from members of Surf Green and Brand New Friend. Young talent is rare these days, but as the five of them set up, we could tell we were in for a ride.

Opening with their EP’s lead single ‘Wear Out’, frontman Orion Courtney-lee blasts his vocals into the microphone. This was different from what the crowd were used to. The band powered through the song with their eyes fixed on the floor. The performance was emotional. I spotted a few proud parents across the room listening intently and filming. As ‘Wear Out’ came to a close, a shy voice spoke through the mic asking if anyone had a spare guitar of use. I didn’t realise this at first, but Orion had broken a string. Nonetheless, we weren’t to worry, as the performance was quickly saved when Comhghall of Zaebuis fixed the frontman up with his guitar.  Playing through ‘Thursday’, the band quickly moved on to their newly perfected song ‘Waterwings’.

From the beginning of this song was clear that Dreamreading had plenty of atmosphere as the crowd was easily mesmerised by this track. It was a new, transformed, mature style of Dreamreading. This was a song that I, for one, was fixed on indefinitely. Clearly Radiohead inspired, it was no surprise to us when the band began to cover the classic that is ‘Idioteque’. Orion’s emotive vocals were piercing, and as he energetically bounced around, the strap on Comhghall’s guitar is pulled off and leaves Orion frantically attempting to attach it back onto the instrument. Although the other members were head-in-hands, this mishap didn’t hold back the band from performing to their best efforts.

Dreamreading finished with a bang.  They were loud, energetic, and understandably inexperienced, but this was a turning point in the night’s show. The few who witnessed it, myself amongst them, left thinking that Dreamreading are certainly one to watch.

Next to take to the stage were Zaebuis. Forming in June of 2018, the punk trio has not been shy to the streets of Derry, having previously played shows in local venue Our Space. The band covered the Nirvana classic ‘In Bloom’, and as they began to do so, the crowd we previously witnessed for Vanilla Days flocked back into the room. All clad in black, the band stayed true to the essence of punk; I found myself analysing their style and noticed Comhghall’s Dead Kennedys t-shirt. They seemed to know their stuff. They flew through their set with unbelievable energy. The audience absolutely loved them and even began a small mosh pit to the front of the stage.

As Charity Shop Vinyl began to set up, the man behind the ‘Why. Gigs’ mask stood behind the microphone for a brief speech on the importance of all-ages events across the province. Lochlainn said into the mic “We need more young people to get involved- we don’t need any more 18+ gigs” and he was met with a crowd of cheers. He chanted ‘Support your local scene’ and the audience was definitely with him on that point, as they chanted it right back with him. He thanked Zaebuis and Vanilla Days for performing, and Dreamreading for travelling all the way up from Belfast to play that night.

Charity Shop Vinyl’s set was something we had anticipated the entire night, and finally, the time had come. From the moment they stepped on stage they had the audience under their control; they taught the crowd to sing the lyrics to their opening song ‘Sergeant Riff’ and periodically sing ‘woah’ with them throughout the song. Just like that, it was sung right back to them. They covered the classic ‘Teenage Kicks’ before moving on to their iconic song ‘Magazine Street’- fittingly named after the street the Nerve Centre is located on. I found myself admiring their infectious energy.

While they were covering ‘I Bet That You Look Good On The Dancefloor’ by Arctic Monkeys, I noticed their presence was intense and the audience reciprocated their energy perfectly. The crowd was singing the entire song back to them, and although it may not have been their own lyrics, I could tell they were in love with the attention. With every movement and mannerism, they were met with cheers of delight and excitement.

‘Our Best Days’ was performed next- the band’s debut single off of their forthcoming EP. The song was about those great summer days you had when you were younger. Frontman Nathan McClintock’s vocals were amazingly belted through the microphone; gaining cheers from the audience as he sang the line ‘Doing anything to make it last!’

They powered through their setlist, performing perfect renditions of ‘Blue Suede Shoes’ and ‘Ever Fallen In Love’, before moving on to another Arctic Monkeys classic ‘Mardy Bum’. As the song came to a close, Charity Shop Vinyl were bombarded with the chant of ‘one more tune!’

However, for me, not only had the song come to a close but so had the evening. From Vanilla Days to Charity Shop Vinyl, my first night at the nerve centre was made one to remember.