Even before the half way point of Patrick Kelly‘s set tonight it is clear that his music is worthy of my attention. There is nothing overly complicated about his music, it’s unashamedly minimalistic and it is all the better for it. ‘Fresh Start’ is the most accomplished number in his repertoire and he gets a bit of help from his female acquaintance Emma.  Patrick makes it clear that he takes inspiration from everything around him with ‘Cup of Tea,’ you guessed it literally about a cup of tea. 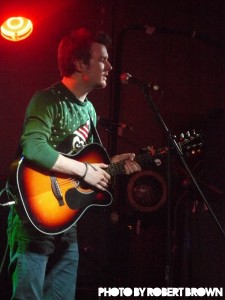 It can be hard for any acoustic band to be heard over the sound of  a busy bar and it proves to be the case this evening for Ria Maguire. She is joined on-stage by her brother but the two siblings face an uphill battle. The winner of Young Songwriter of the Year 2012 at the Belfast Nashville Festival writes wistful acoustic songs, like ‘Chasing Hallelujah’ and although she braves through right to the end, tonight was simply not her night. 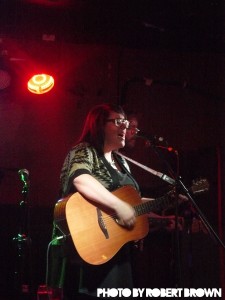 After the difficulties suffered by Ria Maguire just before it even takes tonight’s headline act Chris Campbell a minute or two to quieten down the chatter filled Auntie Annies’ crowd. By Chris’ own standards his songs are quite low key however tonight the room is full of fans eager to hear his music. His songs though have been fleshed out with the addition of his band and there is even an opportunity for a brief foot-stomper although no-one takes up Chris’ offer to come down to the front and show off their fancy footwork. Older song ‘Don’t Try’ sounds sumptuous with the addition of the trumpet even if the material overall tone is depressing – “Made such a mess in giving our best” Perhaps the most poignant point of the evening comes when Chris goes it alone with the touching and sorrowful ‘Sam’s Song.’ There is the tantalising prospect of new song ‘Fool’s Gold’ which really takes advantage of the full band by building a bit of tempo. It will be interesting to see what approach takes next in his career; he has proved that he has the ability to be an acoustic artist but his varying vocal range and tonight’s link up with a supporting band proves he could also head in that direction. Regardless of the direction Northern Ireland and the wider world will be seeing much more of Mr Campbell in 2013! Though we would ask that you refrain from any more guitar tuner jokes Chris! 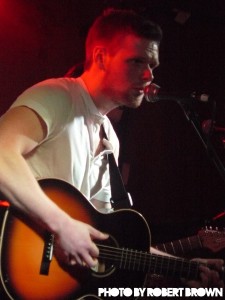 Joyce the Librarian – They May Put Land Between Us