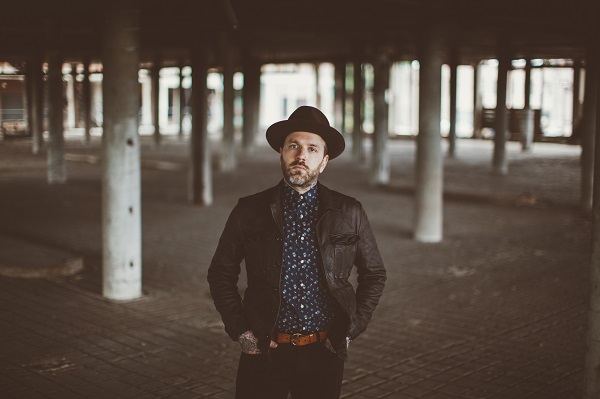 Dallas Green mostly known as City and Colour visited Mandela Hall on Feb 23rd as a part of his early 2016 tour. He chose Lucy Rose to join him as a support act, this is their second time on the road together – these two artists have a lot in common musically and it seems like they do get along very well in their private lives. I was expecting to hear folk sounds beaming from Green’s guitar that night but instead it was a surprising, full progressive rock performance with strong folk elements.

Lucy walked on stage just after 7PM to warm up the public with songs from her two albums. She is constantly travelling so it comes as no surprise to see her back in Belfast after only four months. Rose sang combination of tracks – ‘Middle Of The Bed’, ‘Shiver’, ‘Bikes’, ‘Nebraska’ – perfectly arranged with the rest of the band [bass guitar, electric, keyboard and drums]. She has an unnatural power of sliding through the heavy chords, but she also makes it sound effortless. The way she sings is truly soul gripping. The English singer left the music to speak for itself throughout the gig, saying only “thank you for coming over to see us, it is amazing to tour with City and Colour again – you are in for a great night!”

Lucy was right, not only her performance brightened up the atmosphere, but it also prepared the public for Mr Green’s band with Dante Schwebel on guitar, Jack Lawrence on bass (who I recognised from The Raconteurs), Doug McGregor on drums and Matt Kelly behind the keyboard. They are the ‘musical dream team’ who can exploit any possible sound.

The show started at 8:45 and lasted until after 10PM. Mandela Hall was filled with young fans, since it was age 14+ gig drinks were not allowed in the hall, therefore public was fairly sober and fully occupied by the songs.

Dallas started off on a heavy electric guitar intro for ‘Woman’ – opening track from his newest album If I Should Go Before You – with a steady drum beat and guitar waves. His head was pointed up, with eyes looking into the ceiling, but he was clearly giving up into this instrumental haze. He did not lose it even during a couple of technical malfunctions during the concert. After changing the cables he simply said “sorry, just pretend that it didn’t just happen”.

Second up was ‘Northern Blues’ followed by stripped back acoustic renditions of ‘Two Coins’ and ‘Un-thinkable’. The mood remained steady while Dallas started singing the first words to a beautiful ballad to the album’s title track. The public was applauding after each guitar solo, but the singer remained silent in between different tracks. He only announced the old song from Sometimes record Hello I’m In Delaware after which he asked the fans to “tighten up those dancing shoes” and sparked up the first chords of ‘Wasted Love’ along with ‘Lover Come Back’. Halfway through the set he decided to sing yet more tracks from the past; ‘We Found Each Other In The Dark’ and ‘As Much As I Ever Can’. Altogether it was a heart touching performance and I am convinced that the old and new followers of City and Colour were fully satisfied during this excellent, mid-week performance.