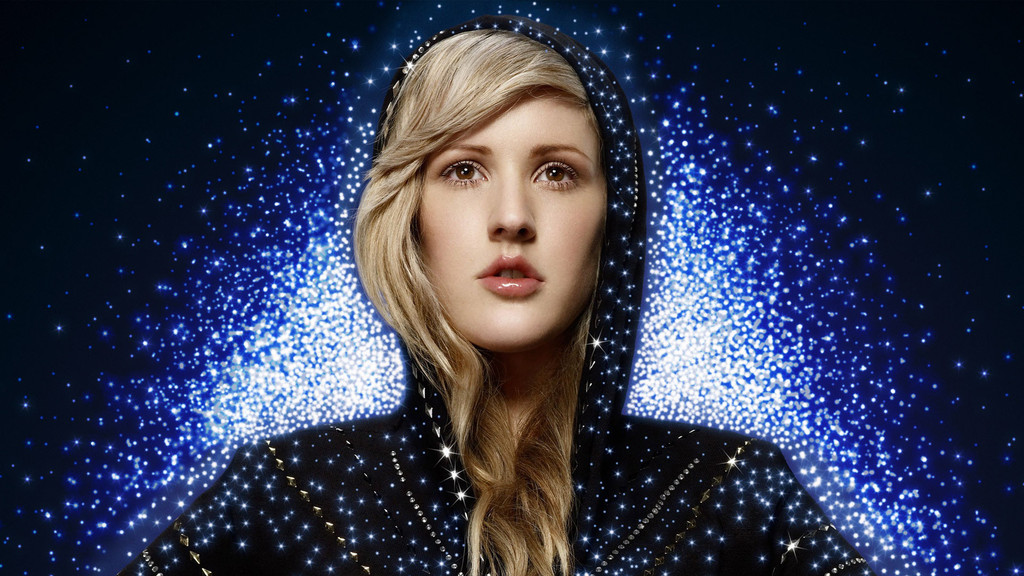 It’s a cool early evening dusk as  drive into town. Belfast city is unwinding from a hard day of retail therapy and preparing itself for that weekly assault of the tiles. Nestled by the Lagan stands the Waterfront Hall and as I pass by in the slow commuter traffic I can see it’s glass front packed with people milling about on each level, enjoying drinks and casual conversation with friends, family or partners.

The masses are congregating in this usually secluded and sedated building for one reason and, one reason only; Ellie Goulding. Kicking off her UK tour of new album ‘Halycon’ in the fair city of Belfast. And what I place to start any tour, Belfast crowds are known for being wild and more than a little bit enthusiastic – mainly because we are so deprived of big name acts – the fans are in for as much as a treat as Miss Goulding is.

Milling about in the foyer – waiting on my ticket to arrive and meet me – the distant echo of the warm up band can be heard over the chattering din of excited fans. However, judging by the numbers filing in through the turn-style doors and loitering around the bars the warm-up act aren’t very high on anyone’s agenda but mine. and I can’t get in, furious as my ticket texts me to let me know he is running later than originally thought.

The warm up bands are in that same electronic, synth-pop vain with piercing vocal range and harmony. The first of two, according to the listing pinned to the door I’m standing outside being refused admittance is Matthew Koma. From what I can hear it isn’t the clearest of sets but post-gig research confirms my fears – I missed a brilliantly talented, fresh sounding musical master. He’s brilliantly up-beat and unashamedly chart-pop electronica and worth a listen.

Lingering on and the second of Goulding’s support acts makes a rather booming, stage stompaing entrance from what I can hear. The rather edgy and brilliant Charli XCX. A perfect warm-up for Ellie Goulding and s dead-ringer for Marina Diamondis [Marina and The Diamonds]. She sounds like the love child of Marina, Ellie, Lady Sovereign and M.I.A, giving that dainty pop a somewhat street edge. This isn’t to say she’s a carbon copy, by no means, from what I can hear she is really getting the crowd going and, from what  have heard in pre-concert research, she really kills it. I just wish the lady at the door would let me in for a minute to see her live.

If anything she has a bright future ahead of her and Ellie Goulding made the perfect chouice in her warm-up act. Start as you mean to go on and Ellie Goulding is obviously planning on starting high and getting higher. By the time my ticket arrives, those that have been in watching Charli XCX have filed out for refreshments.

The lady of the moment is set to grace the stage any minute now as my friend and I shuffle in a get a decent standing spot close enough to the stage so we can brag later about almost being able to touch her. There is an electricity in the air, people are talking about what songs they want to here and playing with camera phones so they can get those coveted shots to post on their facebooks when they get home.

What unfolded over the next two hours was a perfectly balanced mix of new and old. Playing her biggest hits from years gone by and almost every track from her new album there wasn’t a single frown to be found on the faces of fans as they left the concert. Starting strong with opening track from Halycon ‘Don’t Say A Word’ she eases us in for what turns out to be a pogo-ing, riotous night. Her vocals lifting about the instruments and pulling us all in. The Waterfront Hall, despite its size, is a wonderful venue for a gig, with excellent acoustics and that sense of intimacy that suits her so well.

Having heard her play live at T Vital previously I know know she was completely lost in an open air arena – that’s not saying she didn’t rock it but having heard her play at The Waterfront Hall the stellar vocal power-house with her catchy chorus’ and pounding beats is best appreciated indoors.  Keeping pulses racing she battered ahead with title track ‘Halcyon’ and “Figure 8” before taking us back to her début album with ‘Salt Skin’.

From start to finish I never stopped moving and Goulding with her boundless energy didn’t either. It’s rare to see a musician whose music seems to possess their very body and move them in sporadic, frantic rhythmic fits. Taking us to soaring heights to bring us low with her cover of ‘Your Song’ Goulding created an ambient atmosphere never to be replicated. Things didn’t stay slow and acoustic for long as she amped things up again with ‘Under the Sheets’ and ‘Anything could Happen’.

Finishing with ‘Without Your Love’ and hit single ‘Starry Eyed’ I honestly thought the night couldn’t be more perfect until she returned, band in tow to blow us away with ‘I need your love’ and saying a final farewell with ‘Lights’. Blissfully flawless from start to finish, renditions of ‘Wonderman’ didn’t go unappreciated and the crowd could not have been more involved as they belting out every line of every song. She is one of those artists you have to see if ever given the chance as she never seems to disappoint.