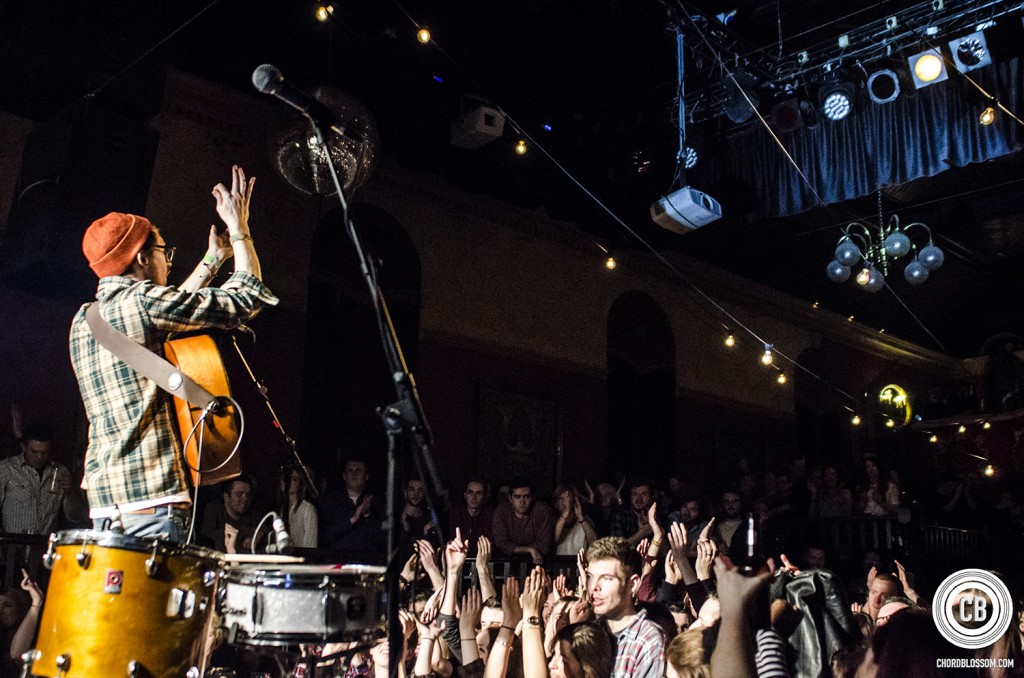 For the past few years St Patrick’s Day shows have turned into big events for The Emerald Armada. The rowdy folk five piece have put annual shows on around the date in Voodoo for four years now, but this year the band decided to step it up a notch with a night in Belfast’s grandiose Empire. Even before the doors opened on Saturday night, the punters were queued from the Empire’s front doors, down the stairs and even down the street. Belfast has been treated to a few big local shows in the past few months, most notably album launches for Axis Of and A Plastic Rose. With the Empire absolutely packed out, this show was surely up there.

First on the line-up is Runaway Go. The Belfast band are now playing as a two piece with the dual talents of Dave Jackson and Fiona O’Kane. Mind you, this set up didn’t take anything away from the music. With Fiona on guitar, Dave providing electronic percussion and backing and the two of them both sharing vocal duties, they created a sound as polished as their studio work. It is slightly disheartening to see them reduced to a two piece but these two combine brilliantly.

There’s a good crowd early on, which is noted by Dave who is in good form. The band’s self-proclaimed Bez even hushes the crowd, albeit fairly briefly, before the duo play what Dave considers his favourite song Fiona’s ever written; the delicate ballad is given a good reception. Their set is a run-through of songs old and new, all portraying their brand of crafted indie-pop. New track ‘Kite’ slots right in alongside the rest of the band’s material, but it is the band’s single ‘Ashes’ that is the highlight here. It’s a perfect pop song combining harmonious vocals, a great hook and, if my ears didn’t deceive, a nice key change in the outro. It showcases the duo’s real live asset, the combined vocal talents of Fiona and Dave, each showcasing an impressive range and complimentary harmonies. 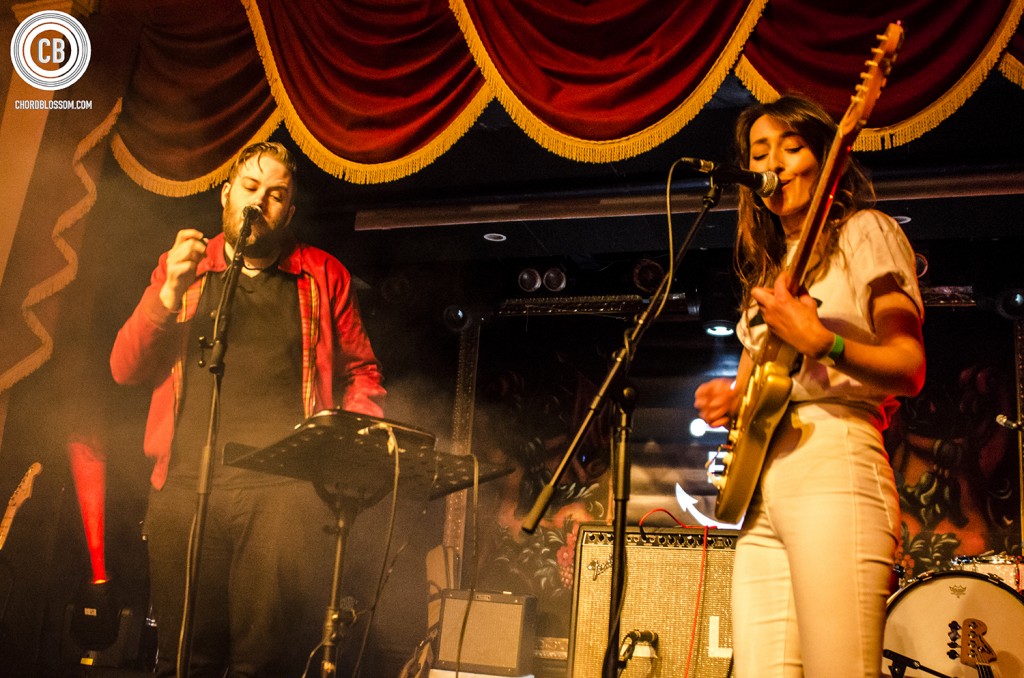 The next band on the bill are New Ancestors, a band who returned home to base themselves in Belfast last year. Since that time there’s been line-up additions and a gradual change to their sound. If you caught them live in the past year frontman Jonny Solari was rarely seen without his acoustic guitar. Nowadays in the run-up to next month’s EP the band are going electric and ramping up their sound.

Here in the Empire this is immediately obvious, with a real rocky opener. Of course they haven’t ditched the old, the favourites are still there including the popular ‘Don’t Feel Sad’. A couple of years on since its release it has lost none of its shine, it is an immensely likeable song that can run in your mind a long time after you first heard it.

Unfortunately the band suffer from a few technical issues for a large part of their set but thankfully it doesn’t seem to effect their performance too much, with the band soldiering on. Once the issues are resolved the band get better and better. There’s a few tracks from the new EP, all given a good reception but the best is saved for last. New single ‘Annabelle’ is a shining example of the band’s new sound. It’s an upbeat and rocky slice of indie pop delivered with aplomb, giving guitarist Glenn the perfect excuse to rock out. It’s no surprise to see band’s own ‘Annabelle’ dancing away at the front of the crowd. ‘Annabelle’ is possibly the best song New Ancestors have written, paving the way for a strong new EP. It’s the perfect track for the set to end on. 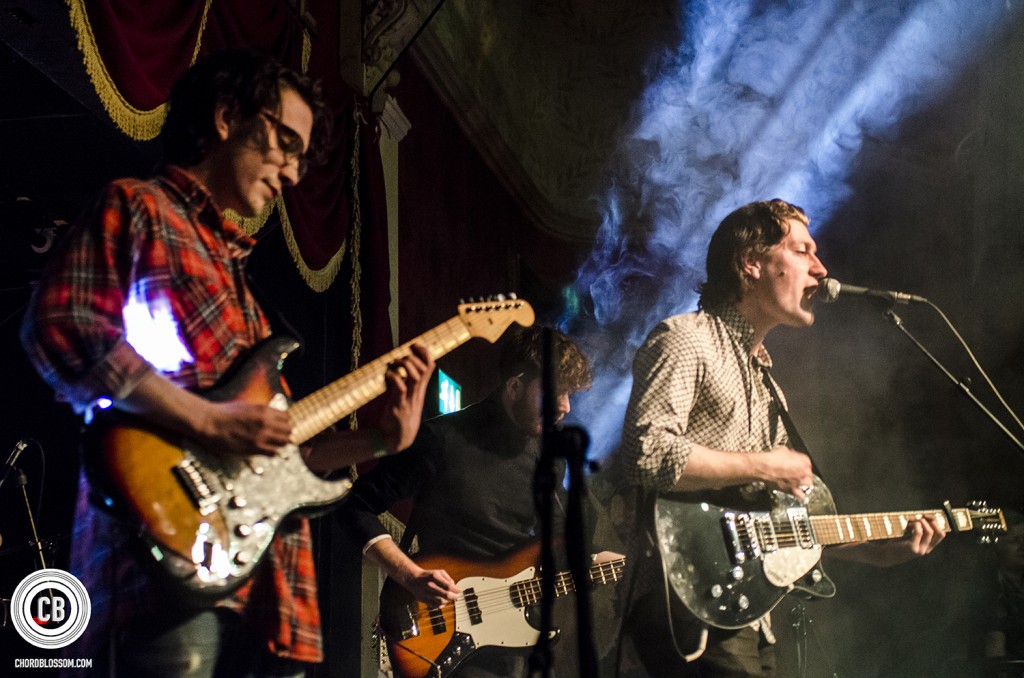 While the rest of the line-up should be familiar to any NI music fan, the next band on the bill are a bit of an unknown quantity. Houdini Dax flew over from Cardiff for tonight, suffering more than a few boos thanks to Wales’ victory in the rugby. Those perhaps unsure of what was to come were quickly won over. Described by one member of The Emerald Armada as “a cross between the Beatles and the Arctic Monkeys”, the Cardiff trio clearly have an affinity for classic rock and roll, right down to the stage moves.

The band deliver an energetic performance with each song getting a big reception from the audience. All the classic rock and roll tricks come out: guitar solos, false endings, some ‘Tutti Frutti’ style scat and a few frontman antics. During the band’s monster of a track ‘Get Your Goo On’, frontman Jack Butler has the crowd doing a bit of call & response, from the stage and, after a dash through the crowd, from atop the bar. Their retro vibe shines through, particularly on mostly instrumental ‘Crack Dance’ which sounds like a classic superhero theme.

There’s a lot to like in their performance, whether it’s the strong rhythm section or the strong vocals; the band seem just as comfortable performing three piece harmonies as they do storming through blues rock riffs on their instruments. They’ve won a few new fans over in Belfast tonight. 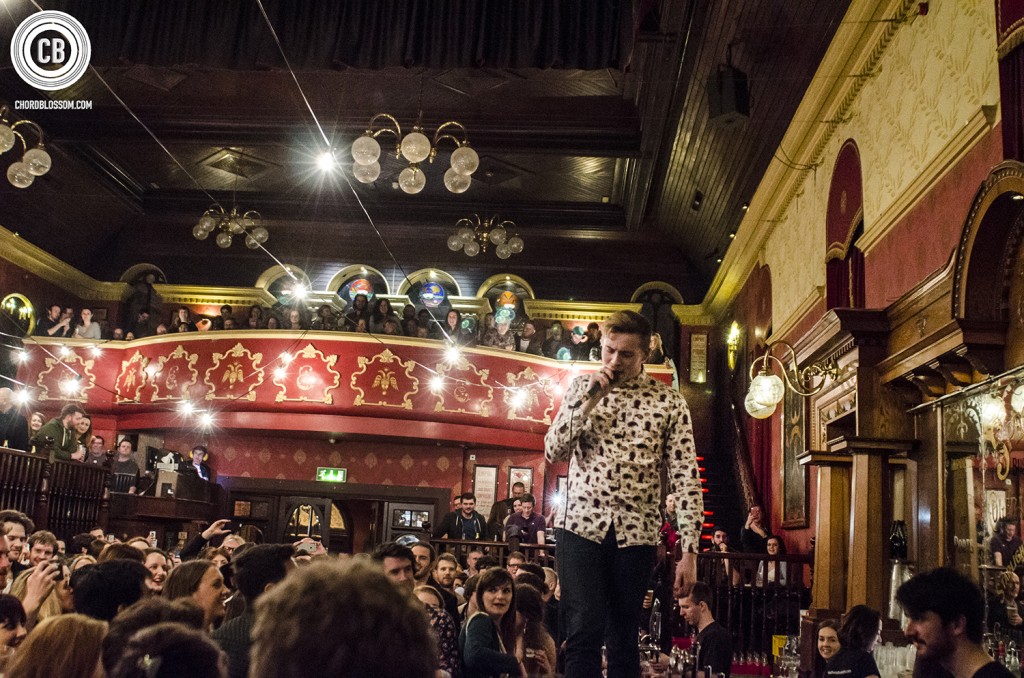 Of course there’s one main attraction in the Empire tonight, tonight’s headliners’ The Emerald Armada are a great example of “small but massive”, to borrow a tagline. For a local band to pack out the Empire, with huge queues forming outside, shows the kind of following that local bands can develop. With strong performances already, there a lot of anticipation in the venue.

The reaction they get as they take to the stage, opening with ‘Sons Of’, is immense, enough to put a rather disbelieving smile on frontman Neil Allen’s face. It’s a measured introduction in contrast to the noise generated from the crowd but their set picks up pace, with pints in the air for ‘Glasses Raised’. 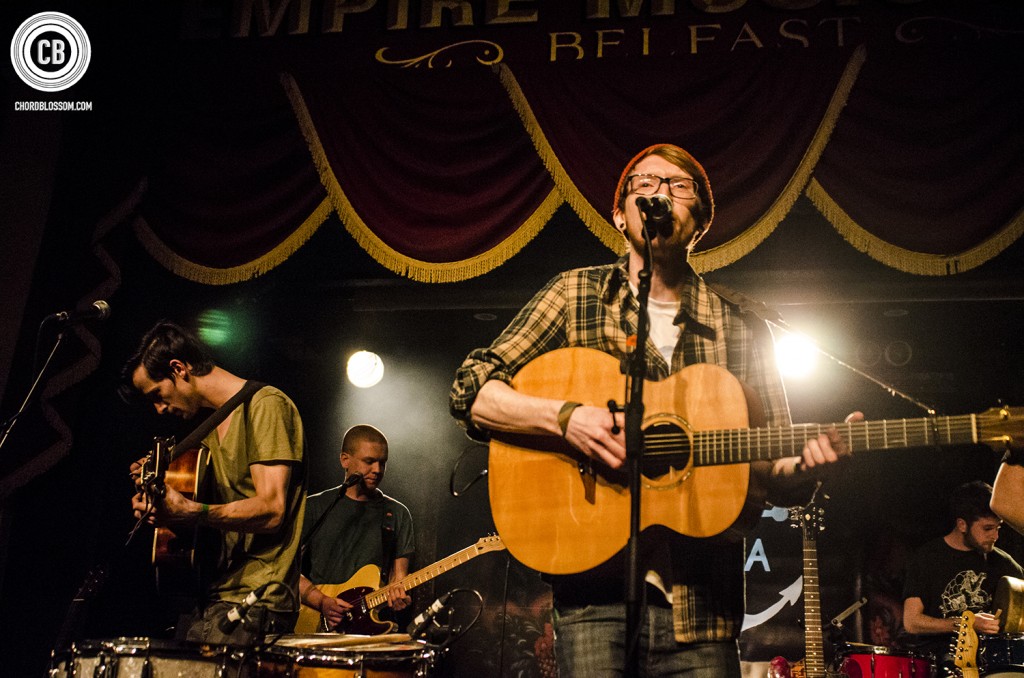 The Emerald Armada have become known for their live performances, there’s so much energy on stage and the energy bounces right back to them from the crowd. Every track is given a great reception and performed with so much ease and enthusiasm, whether it be the rolling folk of ‘Strangers’ or the more lively ‘Brothers’. Such a key feature of their sound is the virtuosic playing of guitarist Tony McHugh, and every guitar break is treated to big cheers. There’s a few new tracks from the band as well, with Neil donning an electric guitar for the first. It’s a slower affair than we’re used to but with their usual trademarks, it’s sure to become a firm favourite for future audiences to sing along with. The same can be said for upcoming single, ‘This House’.

As the band approach the end of their set, Neil dedicates the massive crowd favourite ‘Be Loved’ to his family in the audience. By the outro the whole venue is shaking; the band have the stage trembling and the floor of the Empire itself is pulsating from the weight of a huge crowd bouncing – it feels like we might end up in the downstairs bar before the night is through.

The band’s encore is a one-two of ‘I Don’t Mind’ and ‘Everyone’, with the band joined by members of the other bands, who take the opportunity to sing and dance along, even bashing the drums through the show’s climax. It’s a triumphant celebration to end a huge night for the rowdy, Buckfast-swilling Emerald Armada.

There’s so much to admire about The Emerald Armada, there’s a high level of musicianship, showcased particularly by Tony’s guitar playing, big vocal hooks and harmonies and most significantly huge enthusiasm and energy. With the band enjoying the night so much, it’s really no surprise the audience feel the same. How many Northern Irish acts could bring such a crowd and fill out a venue like the Empire? We’re only in March but The Emerald Armada have surely put on one of the biggest local music nights of the year. 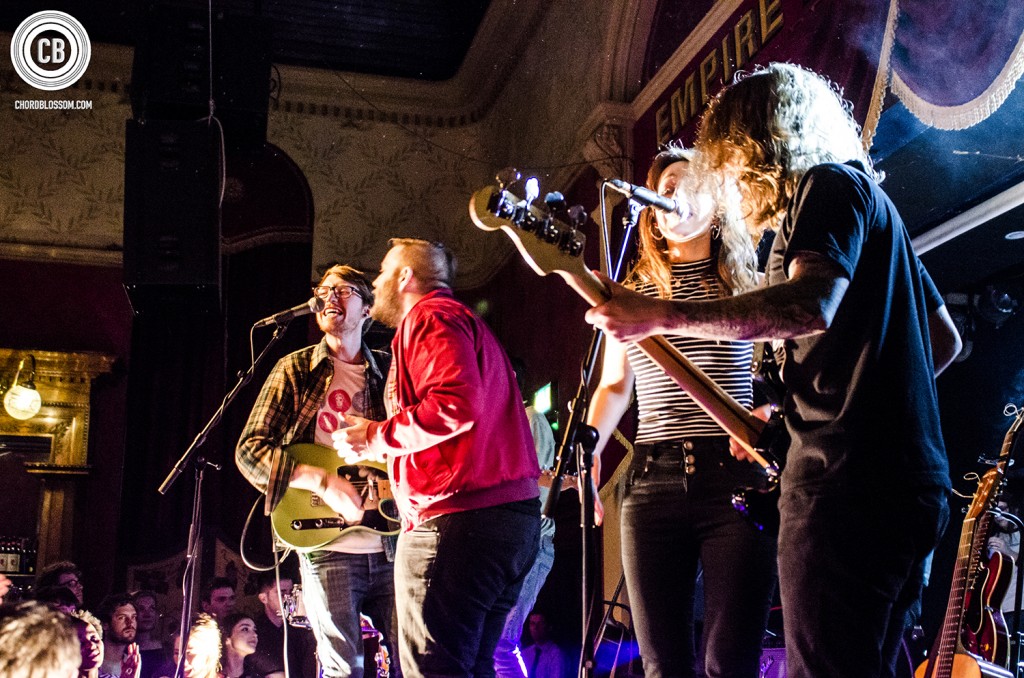