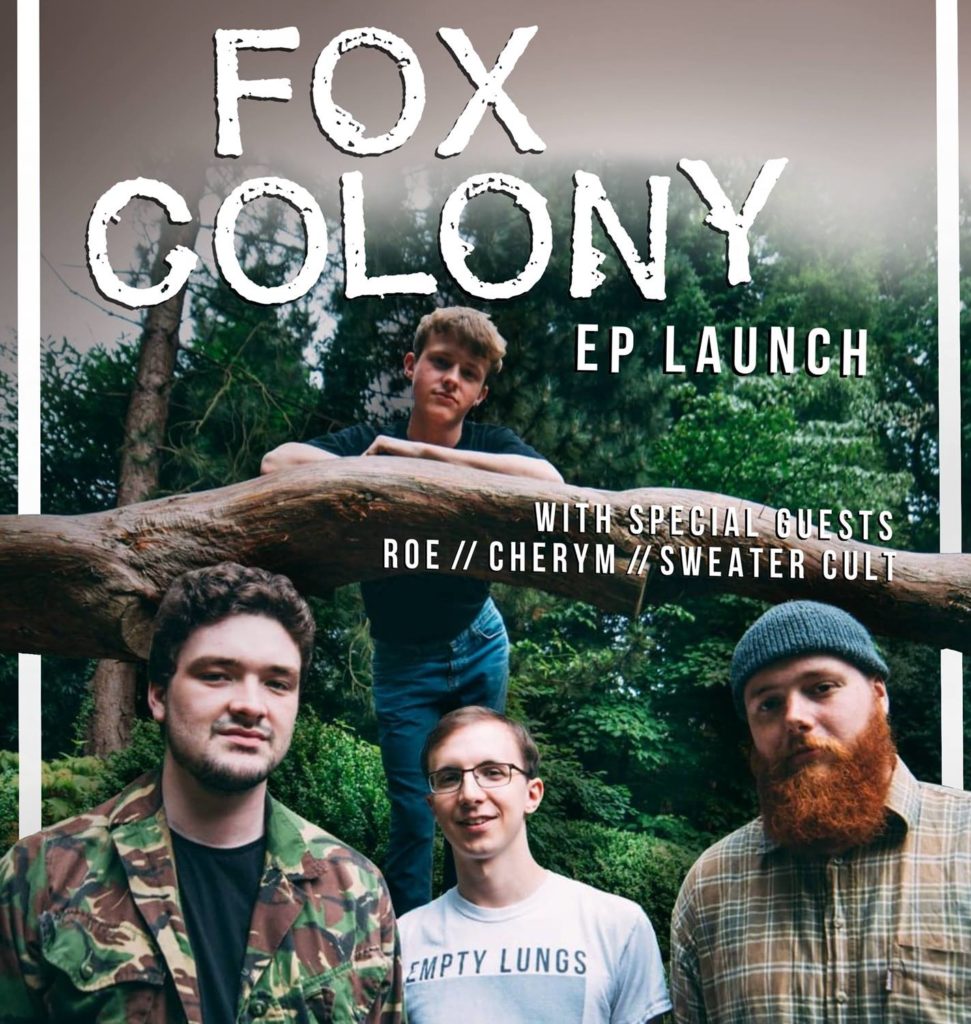 “You’re a writer are ya? Tell ya what son.” A rapid succession of finger jabs into his chest, “You should be writin’ about me, I – listen to me son – I know this city, rite?” I offer a hopefully believable head nod in agreement, yes I do believe that you know this city sir, retrieve my Guinness and make a quick retreat into the darkness, throwing vague promises of returning with a notebook over my shoulder towards the inebriated man in the corner. A solid start to the evening in the only venue where this type of interaction is a foregone conclusion: Voodoo. I ascend the stairs amidst the smells of shattered pints and black leather to the second floor. This is where the magic will happen tonight, as the 21st-century answer to The Pound Bar holds host to four of Northern Ireland’s finest.

As I enter the room I see human shapes, silhouetted against the light of the stage, sharing hyperbolic handshakes and transferring equipment onto the stage. Despite my early arrival, I’m not even among the first twenty in the room but I am the only one with the foresight to grab a window seat. As I sit and sip, watching punters dance in the street from behind the glass, the room fills up around me, comfortable in the inviting grime that emanates from Voodoo’s darkness. From the shadows, three figures take the stage.

Sweater Cult is the first act to perform, beginning the night with a distinctly upbeat feel. Alt-indie vocals resound over the speakers but it is the drums that steal the early show. Thunderous and propulsive, they inspire foot stomps and air punches aplenty as they drive the energy of the set. Bathed in a yellow light, the drums sticks have an almost hypnotic effect as power chords and thick bass lines shake the room. The small but growing crowd begins to jive as one as Sweater Cult fire into their closer, a cover of their favourite anime song. They earned my respect just for having the cajones for that one at the very least.

After a short break, the Derry delegation of the night takes to the stage. Cherym advance on the crowd, emanating a stage presence before they play a chord. In-between the jungle of shadowy figures, I see frontwoman Hannah Richardsons hair rise above the crowd like the sun at the start of Lion King. There is a roar of feedback as Cherym launch into their set, a 20-minute assault filled with cheers, cracking smiles, snarling vocals and punk. An energy flows from the stage that screams for participation, as Richardson employs the unique Derry technique of plosive heavy lyrics that act in the same manner as percussion against a backdrop of Iggy Pop-esque riffs and raw, vicious bass lines. One song bleeds into another in an endless crescendo with limitless potential for dancing and breakdowns that seems entirely based on emotion. Richardson’s vocals vary from sharp snarls to spitfire singalongs with only one constant; crowd satisfaction.

Spearheading the diplomatic delegation from our Derry sisters is ROE, who takes to the stage shortly after Cherym. Alone on stage, armed only with her instruments, an undeniable indie swagger and an underlying punk “f*** you” element, there is a certain mesmerising quality that borders on terror flowing from ROE. Yes indeed, we are ready. As talented a vocalist on stage, as she is in the studio, there is a strength and vulnerability in her pitch which compliments the airy, angelic beats ROE produces amidst the lo-fi set. Different from the fast-paced punk that proceeds her, ROE lives in her limitations and makes the most of them by pushing them to their extremes. To my right, I hear someone yell over the music “I am literally only here to see her.” I can’t blame you, mam. Impactful, powerful and full of a muted bravado, ROE was in danger of stealing the show. Not for long, however.

The main event. Fox Colony take to the stage with an assurance that befits the headline act. Applause from the crowd, even a few cautionary yelps make it through before they are drowned out as the first chords of ‘Fragile’ roar through the speakers. An indie swing with a rock and roll bite, Fox Colony move in sync and the crowd follows as frontman Darren Hill rousing vocals dictate the ebb and flow of the show. Modern and sophisticated with a hint of Foals about them, Colony are clearly enjoying themselves. Discourse with the fans is recurrent, often in between songs, and the utilisation of a live synth adds new levels of intrigue that cut the edge from the fury of Hill and guitarist Aidan Lavery’s riffs as they launch into ‘Supermarkets’. More than anything, however, it is the supreme level of control that catches my attention the most. Despite the breakneck pace and air of unstoppability, there is an eerie calmness about Fox Colony, as if this is just another in a long line of great shows. Fitting for an EP launch, that the most powerful instrument of the night was to be a band’s confidence. The night ends as it should, in a chorus of cheers, whoops and claps, as Hill takes a moment to collect his breath. We’ll allow it. It’s the least we could do.