Firstly, apologies to Jared James Nichols for missing his show. I’m one of those nerdy guys who always tries to get to shows early so as not to miss the support act (even if I’m not reviewing it) and, more often than not, it is a rewarding policy. But tonight, the universe (my day job actually) got in the way and I missed all but the closing bars of his show. If the cheers that ushered him and his band from the stage and the positive noises coming from the punters as they queued from refreshment are anything to go by – he made a very positive impression.

But of course it is Mr Hughes and his power trio completed by guitar virtuoso Doug Aldrich (ex-Dio and Whitesnake) and powerhouse drummer, Pontus Engburg, that we are here to see and hear. After what seems like no time at all, on they come to a rapturous welcome. There is no getting away from it, the audience is largely made up of guys my age and older, all brought up on Classic Rock and no band defines that genre more than Deep Purple. While, Hughes perhaps does not have the same worldwide renown as Ritchie Blackmore, Ian Gillan and David Coverdale, – indeed being a member of Deep Purple Mk. III and IV was the height of his ‘fame’ – his talent has never been in doubt. His ‘reliability’ (the age-old issues of alcohol and drug dependency) and personality (industry gossip of being a tad egotistical) has seen a career littered with false starts and a litany of projects rather than genuine touring bands. But, what has never been in doubt is his talent both as a bass player and as a vocalist and, while many of his peers’ vocal talents are on the wane (including the aforementioned Gillan & Coverdale), the lean, mean, clean Hughes is enjoying something of an indian summer career-wise.

Indeed, ‘enjoyment’ is the vibe. The whole band, not just Hughes himself, give off a real air of wanting to be on stage together, of genuinely enjoying playing together – and it was infectious, creating a real ‘feel good’ atmosphere in the venue. Hughes, in contrast to those less-than-positive stories from the past, is a very generous ‘band-leader’ – (rightly) giving Aldrich plenty of the spotlight to show what a stunning and versatile guitarist he is. What we are treated to tonight is a run through the Hughes back catalogue, from his earliest (Trapeze), through the obvious hefty helping of Deep Purple, a dab of the oft-overlooked Hughes & Thrall, right through to the more recent Black Country Communion. ‘I have done a lot of work in the studio,’ he tells us early on, ‘but I haven’t actually toured very much in my life. I want to put that right and I am enjoying it so much. This won’t be the last time I play here’. Cue roars of approval.

As I said, it is Deep Purple that made Glenn Hughes and this forms the foundation for his show – starting with a bombastic version of ‘Stormbringer’, which pretty much sets the scene for what is to come. Hughes’ bass guitar provides a wonderfully thick undercoat, while Aldrich’s work on his Blackmoresque Fender Strat’ supplies the gloss. Wrong side of 50 Hughes may be, nor is this smaller of the Limelight’s two stages the biggest area in which to move, but there is plenty of energy from him as he throws all the classic rock poses and gestures, giving the photographers down the front plenty of photo opportunities. The song is barely a few bars old when Hughes hits one of his trademark top-of-his-range screams and the crowd roar in appreciation as a box is ticked off regarding what many of them came to hear. 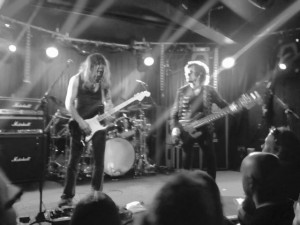 My first exposure to Hughes came with the ‘Seventh Star’ album he did with Black Sabbath. His vocals on this album featured none of those high pitched histrionics but rather were a masterclass in powerful-yet-soulful, blues rock singing – a masterclass I tried and failed to learn from in my teenage bedroom. Therefore, I came not to hear the high-pitched screams but to here that voice I fell in love with back then. Unfortunately, there were no songs played from that ‘Seventh Star’ album but second song, ‘Orion’, gives me more of what I wanted. The song itself is an hugely enjoyable blues rock tune with a shuffle drumbeat.

Hughes’ work has always been more than just Heavy Rock. Trapeze were essentially a Funk/Rock band with elements of Soul, long before it became a fashion and the two songs (‘Right Back To The Bone’ and ‘Touch My Life’) sandwiched either side of the very soulful Hughes & Thrall number, ‘First Step of Love’, show that Hughes is vocally and musically still very much at home with this style of music. ‘Right Back To The Bone’ is something akin to the theme tune to a blaxploitation movie and ‘Touch My Life’ is just a joyous noise as Hughes switches from smooth vocals to supersonic scream. ‘First Step of Love’ showcases the soul side of his voice – velvety smooth. It is really is hard to believe that one man can sing in three different styles virtually within a single song. There are singers who can scream like banshees, singers who can do a cool blues growl and singers who have sweet mid-ranges. Hughes has all three and switches effortlessly between them. We spend billions on space exploration to try and prove aliens exist, when a listen to a Hughes show would confirm they do, because no human should be able to do what he does, at his age, towards the end of a fairly extensive set of shows.

Purple’s ‘Sail Away’ is really well done, especially with Aldrich really going for it on backing vox to really fill out the sound and give the chorus that extra kick. Hughes’ generosity to Aldrich extends to playing one if his old Whitesnake tunes – the glorious romp of ‘Good To Be Bad’ and allowing him the stage while he shows off his skills (and while Hughes takes a well earned breather). 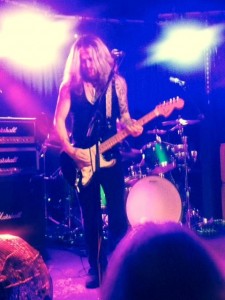 But, it is the near 20 minute old school white man’s blues extravaganza of ‘Mistreated’ that really knock the crowd on its ass. It literally has everything those who came to the show wanted and more. Power blues played by musicians at the top of their game and so tight they are loose (if that makes sense), taking cues of minimal nods, winks and shrugs – playing off of one another. Hughes sings the blues as well as anyone you care to mention and then…. Well…then the boom and bash stops, the crowd fall silent and Hughes shows us he is from the planet Krypton and he is Super ‘Front’ Man (yeah, I know) with an awe-inspiring display of acapella jazz-style singing, with only minimal prompts from Aldrich’s guitar. How is it possible that his voice could remain so sweet and pure after the hour of blues howling that went before? I don’t have the answer, but I have the proof.

If the band had walked off right there and then, we in the crowd could not have complained (well, except those of us who came to hear ‘Burn’). We had come to see a master at work and we had not been disappointed (and we did get to hear ‘Burn’). Thankfully, this was not the end of the show. The thump and throb of ‘Can’t Stop The Flood’ snaps the mesmerised crowd out of its daze. Doug has his trusty black Les Paul strapped on now and cranking it for all it is worth. There is some lovely interplay with him and Engburg including a short and snappy not-too-self-indulgent drum solo. ‘One Last Soul’ (Black Country Communion) is a cracking tune, with Aldrich’s backing vocals once again adding extra texture to the chorus. Show closer, ‘Soul Mover’ simply crowns Glenn Hughes as Rock’s version of James Brown. The man himself says goodbye, promises to be back and departs the stage with his two compadres. 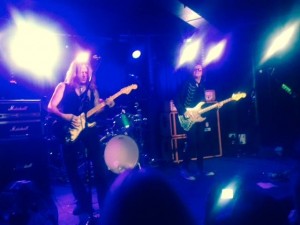 There is a few moments of silence, possibly prompted by the awe which this show has greeted by its audience. But, the silence is broken by the rumblings of ‘we want more’. Cheesy though it is, it is always preferable when the crowd actually calls for an encore. And so it did, and the call for more was answered…and we all knew what song it would be – ‘Burn’. Things are different from 1974 of course with Hughes singing all parts and not just his old Deep Purple ‘you know we have no time..’ part. He made sure he got help from the obliging crowd with the chorus. It was everything it should be – just as this whole show was everything it should be. There is nothing wrong with nostalgia when the artist in question still has it – and Hughes has it. He is the equivalent of a lightly raced thoroughbred or a classic car with low mileage and those that see him now will get the benefit of those ‘lost years’. The band takes its bows and promises to be back next Summer. I will be there when it returns and I daresay many of this crowd will be too – as should you be if you were not here. 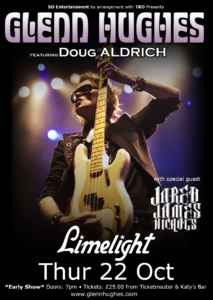