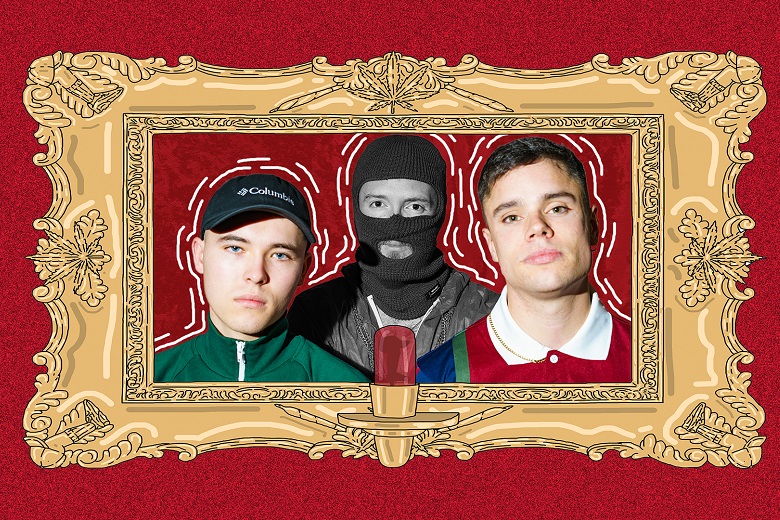 The curious collection of punters tonight are united by one thing: a universal appreciation for our headliners, the wise craic-ing RTE banned rappers who perform in a language less than 10% of their audience can speak. Stuff like this doesn’t happen every day. KNEECAP don’t seem to give a fuck.

Amidst the steady stream of ticket holders making their way in the door, the opening act of the night arrives on stage. Derry duo Dirty Faces, complete with Fred Perry and Adidas tracksuits, are the walled city’s answer to Sealford Mods. Opting for the ‘shout at’ approach rather than the ‘sing for’, their gruff demeanour and distorted bass had the Buckfast in the background jingling in its glass like a scene from Jurassic Park. Air siren vocals ring out lyrics that are equal parts threatening and disgusted, – “You’re always talking, clean shite” comes one line, “I look both ways on a one way street, cause I trust no man with two left feet” comes another – and contain all the subtlety of a petrol bomb. The guttural flatulence of the delivery emphasised their bombastic nature, while the northern brogue telling tales of debauchery and melees cuts up their diction with butcher precision.

Second on stage is Dublin based hip-hop artist JYellowL. On his own tour with a series of shows around the country, he’s joined on stage by his DJ and hype man who work the crowd into a suitable frenzy for the arrival of their MC. The endurance of JYellowL was impressive in itself (he barely stopped moving the entire set) but his vocal dexterity was breathtaking at times. Bars spilled out at a manic, machine gun pace, flowing from one anecdote to the next with deft ease. The smooth beats of fan favourite ‘Oh Lawd’ inspired plenty of crowd participation, while the natural energy the rapper radiates had him winning new fans left and right. More than anything, JYellowL provided a fresh injection of contemporary musical madness that this city desperately needs. There are few words that can accurately describe how a room feels when a verse is executed perfectly. There’s a primal pleasure, an intangible grip that you can feel in the depth of your lungs, and the Dublin MC had the crowd breathless all night. Doing everything but tear the roof down around them, JYellowL and co left the stage with more followers than when they arrived.

Finally, it was time for the act it seemed like every youth in West Belfast was waiting for. Disc spinner DJ Provaí is the first of KNEECAP to emerge, complete with boiler suit, gold chain and balaclava, before the two grinning faces of rappers Móglai Bap and Mo Chara sprint on stage. From the get-go, the chemistry between the Irish language and hip hop is stunning. It’s as if the natural lyrical quality of the two mediums were made for each other. And as someone who doesn’t speak a lick of Irish, I still found myself mouthing along with the chorus of each song with intent. It’s a testament to the sheer energy the hip hop trio exert. Their unique brand of ‘smick rap’, all petulance, revelry and 80’s style histrionic beats, is a potent one, which explains the sold-out crowd that began to threaten the structural integrity of the Empire.

Returning from a three-week tour, this was their hometown gig. The “Fenian capital of Ireland.” More than once, the two MCs came to a forced stop, laughing aloud. They couldn’t believe it. To be honest, neither could we. Two performers, that look and sound like us, rapping about narcotic indulgences, pesky bouncers and police stop-and-searches. It was like a fever dream, but it was as real as a kick in the teeth. Behind their outer shell of grime and middle fingers, however, the trio was genuinely touched. Coming home means something. Playing your hometown means something a lot more, and seeing the crowd had them momentarily speechless. Emphasis on momentarily.

The night continued, with crowd surfing, moshing and pogoing abound. Fan favourites ‘Incognito’ and ‘Your Sniffer Dogs Are Shite’ are drowned out by audience participation. Unable to escape the moment, KNEECAP loses themselves in the madness of grandiose beats and their liquid flow. What struck me most, however, was the cultural significance of the evening. This is a group giving voice to a previously silent section of the city’s musical scene. Make no mistake, nothing like this has been done before on this level. This is NWA meets Give My Head Peace. They wear where they are from on their sleeve. They don’t bite their tongue. And they aren’t a fan of your royals (a sentiment expressed less politely on the night). Their mix of garage beats and celtic fury is something brand new, while their writing has opened up a whole new avenue of chants and anthems, a theory that they tested/proved on the night. And while they are relentlessly funny, this is a serious outfit, one which you underestimate at your own risk.

The night ends with a rendition of the song that started it all. ‘C.E.A.R.T.A’ was blacklisted from RTE, which cited copious drug-related imagery and anti-social sentiments as grounds for banishment. The hundred-odd strong crowd had their own opinions, jumping in unison with each beat. The racket was thunderous. KNEECAP took a second at the end of the show, surveying the destruction, grins plastered across their faces. Ozymandias would be proud. Giving a final thank you, they retreated backstage to eruptive applause. We were left more than a little bewildered. Scanning the crowd, I saw faces that suggested they didn’t quite believe what they had witnessed. Part of me is still reeling. But if you missed out this time, don’t worry. They haven’t gone away you know.