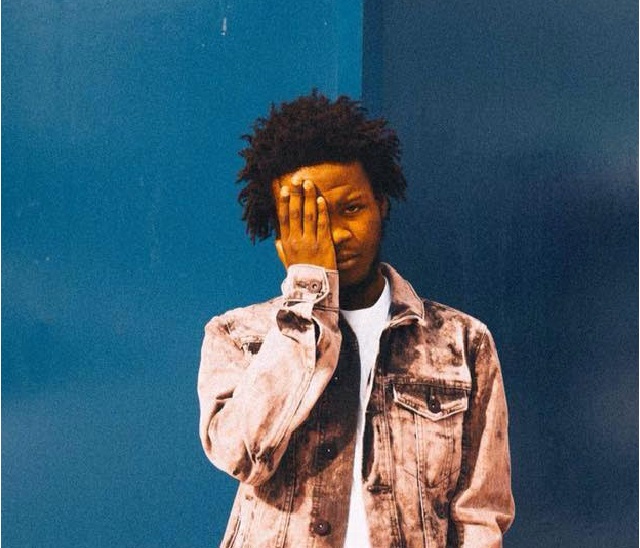 Most nights, the old Belfast Met building sits alone and silent. Dominating Tower Street, many of its windows are boarded up, and its gates chained shut. Tonight, however, there is life behind the curtains. Red and blue neon blend into a lilac haze and illuminate the left corner of the second floor, the only sign of life on this radial plane. My destination for tonight.

As I make my way through the entrance of this modern ruin, the man of the hour is greeting friends directly ahead of me. Leo Miyagee, one of the most talented faces in the rapidly rising rap scene in the north, is all smiles. Tonight, after all, is his. His latest album Ffdlc was released earlier this week, and the energy from it is near palpable. Its liquid flow and free spirit echo the influences of his debut, but Miyagee has incorporated a more mature, professional air into his latest. The results are magnetic, a contemporary hip hop album that is as mesmerising as it is fresh. He has clearly increased his standings given the sold-out nature of tonight’s celebration. Eager to see what the man can accomplish, I head to the second-floor venue. Bass vibrates through the floor as I walk in, the room already full, as Samson and Goliath dominate the skyline in front of me. Any writer worth his salt could see the clear metaphor, the melding of old and new Belfast, come together in the same room for what could be a culturally significant moment. The hairs on my neck stood alert.

From the offset, I was struck by the difference in tonight’s crowd when compared to my usual haunts. Not necessarily better, but different. People faced outward from every conversation, eager to greet the room head-on, to drink in the congeniality. The fashion, all tight-baggy and side fades, and the pre-show tunes, a selection of wavy ad-libbed beats, were more relaxed than the black-on-black-on-black post-hardcore greeting I am used to. A pleasant indicator of surprises to come.

I barely have time to open my wine (I feel that every new experience deserves to be met with a pinot noir) before the first of two opening acts hits the stage. Lurgan native Jack Bashful has established himself a cult favourite in the fledgeling hip hop scene. Beginning his set with the dark, claustrophobic beats of ‘Inception,’ it is easy to see why. Part performer, part painter, Bashful canvasses the scene and we all follow his lead. Beats ranged from spacey flamboyance to murky shadows, while his flow had a verbal sting to it. A lyrical dexterity allowed each track to run into the next with little disruption, Bashful barely taking a breath between. This allowed the MC kept the pressure high throughout, like a sous chef watching his creation brew, adding a pinch of spice every now and again to keep the audience on its toes. Metaphors spill out, each one met with a suitably impressive instrumental, solidifying the strong showing from the MC who managed to balance the surprising with the familiar.

Second to assume control of the evening was performer Youse.e, a name unfamiliar to me no more. His breathless vocals gave his flow an alarming urgency, adding an addictive, earworm nature to his syrupy intonation. The emotional core of his set was infused with a grimy, jazzed echo that gave its clandestine lurch the danger of a heavyweights southpaw. The low sneering delivery allowed the MC to wind his way through his set list with deft ease, often moving in tandem with the beat. A small contingent of the crowd were only happy to join in with this, swaying with the waves and gyrating with the spit. Noticeably darker in composition than that of Bashful, both artists seemed to have some experience in walking the line between the malicious and muted, with much of Youse.e’s set in juxtaposition of itself. Going from delicate and soothing, to jagged and abrasive, the variety in sounds was enough to garner himself a new fan in me.

Last on stage is the man of the hour. Welcomed on stage by local funny man William Thompson, Miyagee emerged from the crowd to the loudest applause of the night. My eyes darted nervously to the noticeably sag in the floor underneath the heaviest part of the crowd, which wobbled once the set began. Miyagee’s work, for the uninitiated, is a mishmash of contemporary and nostalgic instrumentals, that combine to create a sonic symphony that belies his status as anything other than a household name. Combined with a brisk intonation and a full-bodied flow, he is one of the acts leading the charge in changing this cities music scene for the better.

Waves roll out of the speakers as Miyagee kicks into his newest releases, a set of tune infused with hip hop, gospel, electronic, house and jazz. The effortless nature with which he navigates his bars seems unfair to watch, as icy lines are spat out with an adepts precision. A constant presence in the room, Miyagee stalks his performance space, leaning into the crowd as he spills over with a boundless energy. Fan favourite ‘Akulalake,’ Miyagee’s normally tame anthem, sees the room explode into a flurry of arm waves and exhilaration. An atmospheric artist despite being relatively unarmed (with an instrument that is), the East Belfast MC is a formidable performer to observe in person. His music is full of purpose and spirit, while his demeanour is built for the stage and only aids in his natural ability to control the room. I found myself enthralled by his collection of chilled funk and colloid bars, as Miyagee put on one of the most genuinely unique and surprising performances I have witnessed in a long time.

The scenes from within Tower Street would have been unthinkable merely five years ago. A sold-out room, there to witness the homegrown talent of a trio of MC’s, all of whom are part of what has the potential to be the most exciting underground music scene in recent history. If you get a chance to catch it now, do so. If you’re thinking about it, do it. Changes to get this close don’t come around often, and if tonight was any indicator, this is going to be big.