For those who got down early enough tonight’s support act, Bear’s Den put on an enchanting show. The main highlight of their set is ‘Pompeii’ with Andrew Davie’s soothing vocals narrating some heartfelt tales of love and loss. But the electric guitar fronted set closer, ‘Hard Life,’ proves that the nu-folk sound is not the only string to their bow. If the recent trend towards success for more folk orientated artists like Ben Howard and Mumford & Sons continue then surely Bear’s Den have the potential to become a household name.

On Matt Corby‘s last visit to Belfast his raw talent silenced the usual rowdy crowds at local shows, tonight is no different. Rather than being a hidden gem, the young Australian is now being hotly tipped as a star of the future. For opening track ‘Big Eyes’ Matt opts to go it alone and it doesn’t take long for the bustle and noise of the bar to fall into an eerie silence as his voice captivates the room. For ‘Kings, Queens, Beggars and Thieves’ we are introduced to the backing band for the evening. It could be argued that on the strength of Matt’s voice he could rely solely on it, though the band does add some more substance to proceedings.

New song ‘Runaway’ is an interesting prospect in which Matt makes it is about a previous love. It would certainly be interesting to know what the girl who is so disdainfully referenced makes of it. His set takes a slight change of pace away from its acoustic musings with ‘Made of Stone,’ which sees Matt takes up the role of pianist and provides us with a much more soothing number. The mostly quiet and reflective atmosphere in the Limelight is transformed when Matt starts howling for the introduction to ‘Brother.’ Wild cheers and whoops of delight echo round the venue for Mr Corby’s most well-known song. Similarly his cover of one of this year’s most prominent songs, ‘Lonely Boy,’ is very well received despite having a completely different vibe to the frantic original.

Matt has been quite quiet but he gives us a bit of background to his untitled song from his Into the Flame EP. Apparently an ex-girlfriend wrote him a 13 page letter detailing all his faults, and this song highlights his regret that rather than reading it, he burned it after one page. As you can imagine it is a pretty remorseful affair. The final song of the evening is ‘Soul is a Fire’ and its wonderful bluesy vibe washes over the delighted crowd. After a short delay Matt returns to the stage and finishes a triumphant evening with ‘My False.’

You can debate the pros and cons of music reality TV shows but if it wasn’t for Matt’s appearance on Australian Idol it is unlikely many of us would have had the privilege of discovering his awe-inspiring vocal talents! 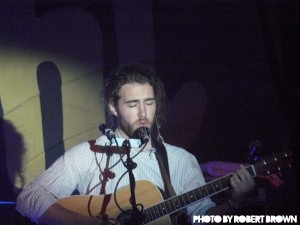