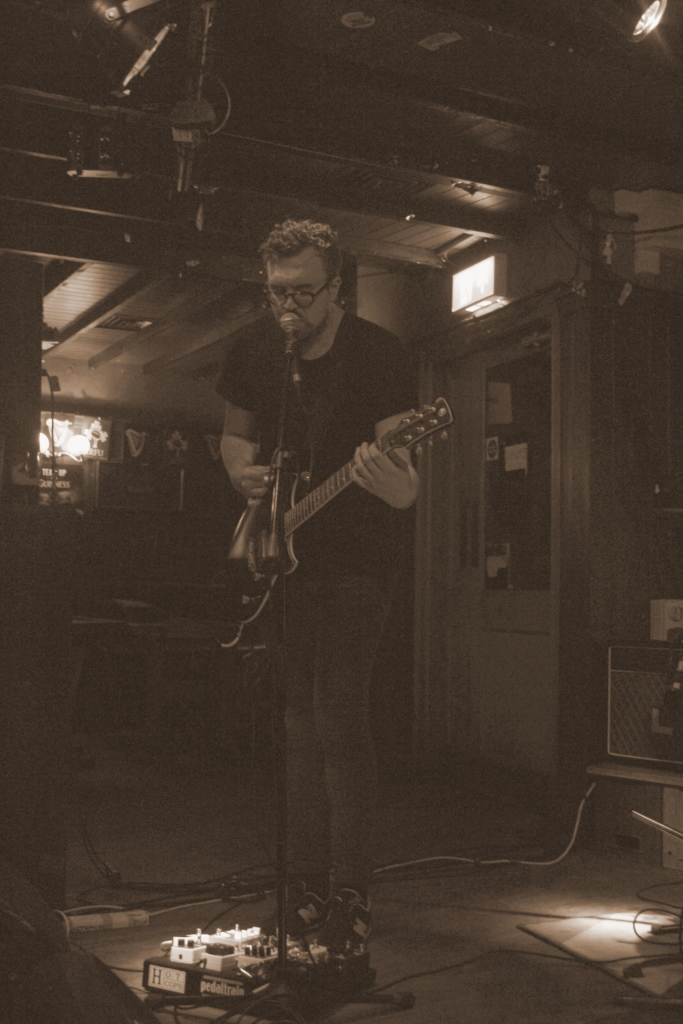 For the second time this week, I find myself descending into the pits of McHughs bar. I wonder for a moment if the staff recognise me, only to find the same bartender from the previous night standing sentry at his post. He remembers my order – I’m not sure if that’s a touching gesture or an indication of my alcoholism (it was a bottle of Magners, heavy on the ice. Don’t judge me, flaws are healthy). Aside from this, there’s little sign of the blues-soaked destruction of the previous gig. The remnants of Dead Horse Jive have long since departed, while a crowd reeking of indie scuzz and alternative fuzz have filled their places.

First to take the stage (if you can describe it as such) is Hand Models frontman, Gareth Murray. Noticeably absent from the stage is uhhhh… Hand Models. Murray sets up for a rare acoustic set, explaining “Our drummer is… to be completely honest I don’t have a clue where he is.” That’s that then. Impressively, the racket made is still fairly comparable. The slacker indignation that has charmed Belfast all these years does not suffer from the lo-fi sound and instead adopts the new vibe. We were treated to as-of-yet unheard versions of ‘Wednesday’ and ‘Banana,’ neither of which lose the spirit of the originals. Murray powered through the set, fuelled by chunky strumming and a slack-jawed growl and eager to surprise. A cover of John Denver’s ‘Country Roads’ elicits laughter from the crowd before a final rendition of ‘Skate Shoes’ closes the set.

The following opener is A Bad Cavalier, whose echoing instrumental opening quickly breaks into an indie punk stomp. Returning from an extended period away from the scene, ABC has the attitude of a group looking to prove they haven’t lost a step. I believe them. Their almighty roar, all echoes and reverberations, is sustained by the slow march of their rock and roll sound. Wiry riffs and kick-in-the-teeth percussion are the catalysts for most of the numbers, and their punky rhythms have ferocious legs when played live. The musical equivalent of someone you wouldn’t like to meet in a dark alleyway at midnight, the set ends much as it started: a vital scream and a crash of cymbals. Tremendous stuff.

The last to take the stage, headliners Mob Wife, have no trouble following their two openers. The heaviest of the trio, the rough and ragged vocals have a tangible murk to them, while the steely solos of the lead guitar have the now sizeable crowd on their feet, exhilarated. Sounding like they’ve just held up a stagecoach, aggressive grooves and hammering percussion holstered at their waist, their set was relentlessly entertaining. Grungy at its quietest, shake the lights heavy at its loudest, Mob Wife didn’t want you leaving unless your ears were ringing. Not a bad week for Mchughs, nor was it bad for myself either. Three of Belfast finest took to the stage, and when they left there was scarcely a non-disappointed face about the room. You can’t ask for much better on a Wednesday night.