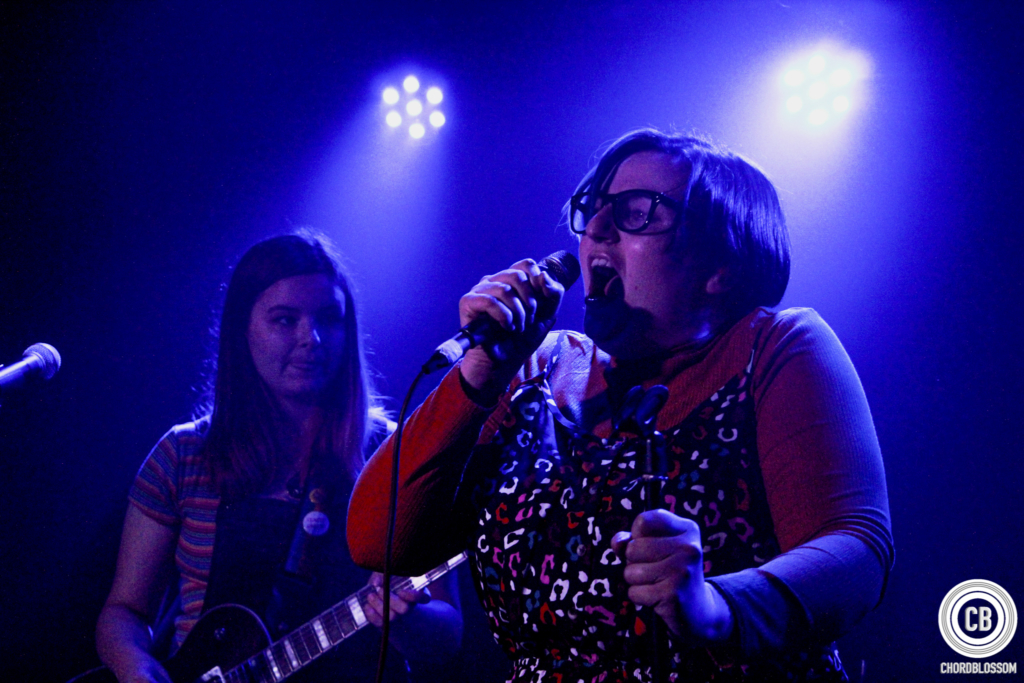 Whoever was writing stage directions for tonight clearly knew their audience. The newly formed Visceral Promotions scored a coup in securing the hotly tipped post-punkers Odd Morris from Dublin, and as night closed in a murky, wild darkness enveloped Belfast’s Lisburn Road. Fitting.

But before the Dublin quartet takes the stage, a host of hometown talent warms the room. First on stage is the runaway train-esque riot grrrl act Problem Patterns. The band are fresh off of a nomination for ‘Oh Yeah Contender’ at this year’s NI Music Prize, and it’s easy to see why. Opening the set with the scaldingly fierce ‘Allegedly’, the four-piece waste no time establishing the mood of the show.

Powered as always by a barrage of screeching vocals, unrepentant bass lines and no small amount of righteous fury, a string of singles from their debut EP ‘Good For You, Aren’t You Great’ left the opening crowd blistered and bruised in the best possible way.

The second act of the night is Mob Wife. No strangers to performing with PP, the natural chemistry between the two acts lends itself to Mob Wife’s own set, who quickly pick up the energy where it was left off. With a set of punk-inspired percussions and alt-rock riffs, Mob Wife are quick to announce themselves to the onlookers. They live up to their reputation as one of Belfast’s best DIY live bands, with a tumble of jagged vocals and murky songs leading the charge on the night. A worthy performance.

And then, it is time for the headline act. Beneficiaries of the recent post-punk and guitar music boom in Dublin, Odd Morris announce themselves for their first-ever Belfast show with a tangible atmosphere. With a set steeped in drama, tension and isolated spaces, the surprisingly cold and magnetic personas of Odd Morris were a treat. Take their signature track ‘What Might Be’ – what is already a fearsome slow-burner takes on anew life when performed tonight, making it almost irresistibly frightening.

Drawing the crowd in with a set of ghostly vocals and dangerous bass lines, the malicious malaise of the band was deliciously addictive. They leave the stage to a rapture of applause, ready for their next show in the walled city the following night. Derry’s in for a treat.