Go Wolf are an electro pop band hailing from Belfast, the quartet bring their fine tunes to what is a quiet Goat’s Toe bar. It is a shame as they miss out on ‘Even God’ a quite catchy yet chilled out number that has a hint of the Postal Service about it. New single ‘Voices’ gets a run out as well, and it is a bit more upbeat but still very easy to listen to, indeed the stripped down ending with just Anna and Scott singing is delightful and perfect. 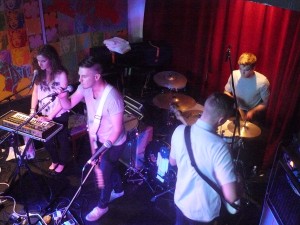 Sons of Caliber are the folk darlings of the NI music scene, led by Andrew Farmer, they create melodic tunes with beautiful lyrics. Tonight Rosie Barry is missing so she is replaced by the talented Rachel Austin. Their music should be listened to late at night while gazing at the stars or when you need to unwind. Although at one point there is the prospect of a dance competition Andrew offering to buy the winner a drink from the bar. There is also an opportunity to hear new song ‘Apple Core’ which is going to sound wonderful on their new release. It is a wonder how ‘Falling For You’ hasn’t put more of a spotlight on the band but it’s safe to say they have won over a few new fans tonight. 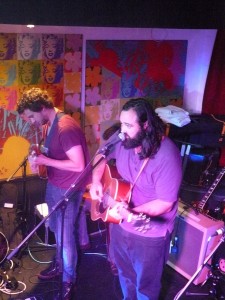 Master & Dog are most famous for their single ‘Long May You Reign’ which featured on the NI Tourist Board adverts but they also have numerous other great songs as demonstrated by tonight’s show. ‘Blinded and Cross’ gets feet tapping before the powerful drums of ‘Heavyweight’ pulse through the small bar. It is the variety of the songs that make Master & Dog such an interesting prospect live; one minute they are quite chilled out, then the next they are rocking out. We have another dance competition with the lucky couple walking away with a copy of their first album ‘Dinosaurs.’ Their latest single ‘Canada’ is a soaring number that has to help the band find their way on to bigger and better things (very likely if the positive reviews of their new album are any indication). But not surprisingly ‘Long May You Reign’ is the real highlight with the whole pub singing along on the chorus and swaying in time to the music – it may have been released years ago but it still sounds as good as ever. While the Northern Irish music scene is stronger than ever it would be nice if Master & Dog were to be the next act to make it big across the water. 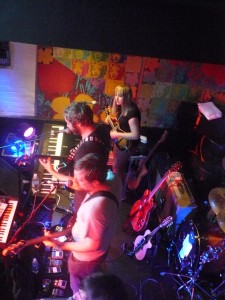