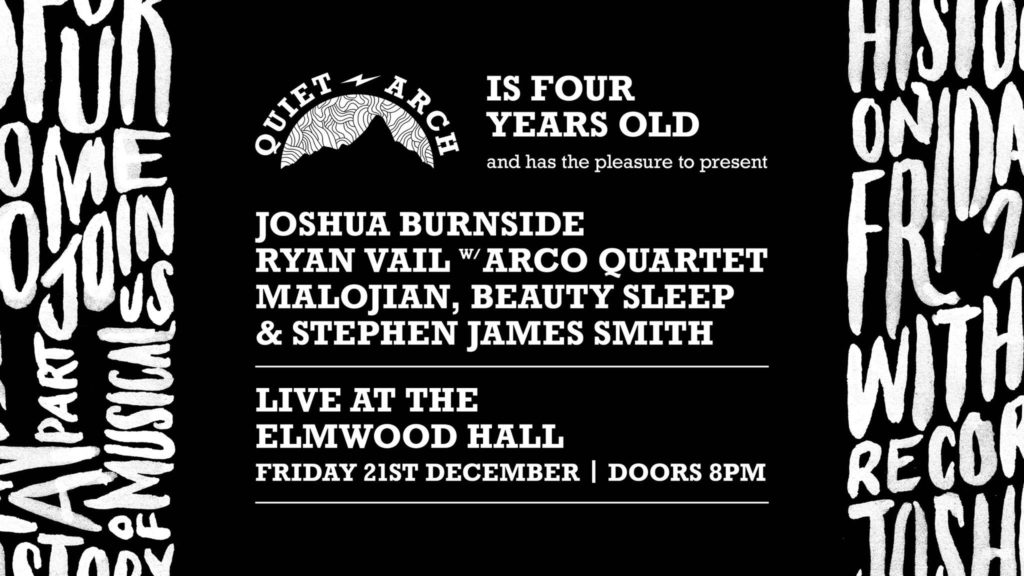 There’s an oxymoronic symmetry to celebrating a birth as the year draws to a close. But then, Belfast based indie label Quiet Arch thrive on that type of weird. It’s what keeps them interesting.

It’s my first time in Elmwood Hall. A gothic church converted into an entertainment space, it’s as cold on the inside as it looks on the outside. An unwelcome fact given the late opening of the doors. I join the back of a long queue and watch with bated breath as we slowly make our way inside. What welcomes me is a structure reminiscent of the Ulster Hall, all curved arches, pillars and high ceilings. Soft red lights coat the stage. It’s the fourth anniversary of Quiet Arch’s foundation, which has long been a haven for some of the island’s best local talent. As I take my seat (the far left seat at the very front as opposed to my usual dark corner. I felt brave tonight), a cold wind fills the hall. Goosebumps bloom on my neck and arms. A fitting metaphor for the lineup tonight, a group of artist who specialise in unsettling sounds, in resisting the norm. An aesthetic becoming of them.

MC for the night is poet Stephen James Smith, a wordsmith from Dublin, who reappears throughout the night to bridge the gap between acts with anecdotes. I’ve never been one for open mic poetry but his opening performance, an ode to his home city of Dublin, was powerful enough to leave me transfixed. Unwilling to overstay his welcome, he quickly retreats backstage after finishing, just in time for the first act.

Dreamy trio Beauty Sleep open proceedings for the night. Joined on stage by a number of friends, who are guesting on instruments, their expansive sound is markedly different from a majority of those found on the local scene. Comprised of indie choruses, occasional rock and roll bites, spacey textures and dreamy pop melodies, they’re a little bit different and a lot amazing. With an embracing vibe that resembled The 1975, their impressive variety of vocalists and sounds showcase why Quiet Arch took them on board.

Next to take the stage is Lurgan psychedelic purveyor of the strange Malojian. Somewhat of a local face, especially in this crowd, the alt-folk singer-songwriter has cultivated a cult following, many of whom are in attendance tonight according to the applause. Accompanied by both a cellist and violinist on stage (side note: I’m a sucker for live strings at a gig, elevating any performance), Malojian’s set was a mixture of crowd favourites and numbers from his latest album, a nominee for Best Northern Irish album 2018. Ghostly backing vocals from the string sections gave a distinct country/folk flavour, while the mournful guitar strumming and lyrical depth gave an almost religious twist to the gig. Quietly rancorous, surprisingly humorous and a little bit frightening, frontman Stevie Scullion raised a single hand in appreciation of the applause that greeted the end of his set.

Next comes an immediate mood change from the longest-tenured member of Quiet Arch, Ryan Vail. A master of atmosphere, Vail’s performance is as much a visual spectacle as it is an aural one. A combination of pulsing lights and lasers, a live string quartet (more strings ahhhh) and electronic dread, Vail has one of Northern Irelands more unique and intriguing sets. A maelstrom of lights and sounds that leaves a beautiful destruction in its wake, the atmospheric tension borders on the sublime as Vail leads the crowd through a maze of electronic waves and colourful pulses.

To end the night, Joshua Burnside emerges, armed with his trusty six-string. A veteran of the stage by this point, he dutifully waits for the applause to end before beginning his set with delicate finger plucks and gentle vocals. The biggest draw of the night, Burnside has a propensity for lyrics and storytelling. A soft-as-velvet flow continues throughout the show, gradually bringing his audience along a winding path of rustic, low-key acoustics, strings and brass. From start to finish, Burnside has a recognisable comfort, telling familiar stories of heartbreak and frustration, bringing relatable intangibility that makes him ready to be enjoyed. Poetic, descriptive lyrics tell tales of childhood memories, of sickness and health, of bottomless darkness and blinding light, as one of the local scenes premier singer-songwriters put on a show to remember.

Quiet Arch’s 4th birthday illustrated why they are one of the superior collections of local artistic talent, with an audio demonstration of epic proportions. Truly one of the better gigs of the year, and a fantastic send off for 2018.