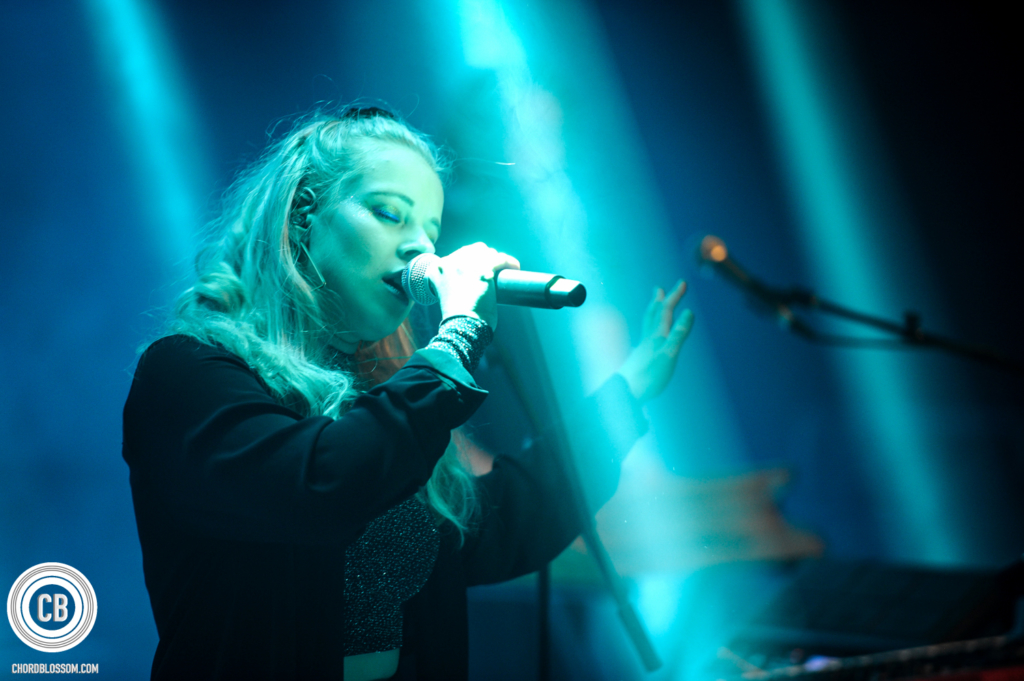 There are few local artists brave enough to book a 350 capacity venue for a headline show but then Rebekah Fitch hasn’t gotten to where she is now by playing it safe. Over the last few years, the songwriter has written some of the finest alt pop that Ireland has to offer and developed into a sought after live artist in her own right. The stunning surroundings of The MAC seem like the perfect arena to gauge how far she has come and more importantly whether people will turn out in numbers for her music.

As openings go, Reevah‘s is pretty understated. The Derry native appears alone and lets her vocals make the introduction with the audience. Her openers ‘Spaces’ and new addition ‘Older Now’ offer an untainted glimpse at her vocal range which unsurprisingly soon leaves the crowd hooked. Clearly keen to fill out her sound for the surroundings, Reevah summons her backing band and launch into ‘Nights’. The introduction in particular of Brian Doherty on drums lifts her sound and allows Reevah to introduce ‘Runaway’ which drifts slightly away from her traditional folk based sound. We are offered a taste of her new single ’26’ which. while promising, is upstaged by her debut single and set closer ‘Daydreamer’. Sumptuously textured, it really captures Reevah’s ethereal folk ambitions and lets us sample her radiant vocals one last time.

A short interval only serves to heighten the excitement for Rebekah Fitch‘s arrival. As the room goes dark and Fitch’s distinctive vocals go through the PA, on struts the woman of the hour to rapturous applause and cheers. ‘Another Show’ is the opening salvo and for over an hour we are treated to anything but another local music show. Perhaps it is the choice of venue, the perfectly choreographed lighting effects, the addition of a string section or maybe just Fitch’s enthusiasm, but this is way above what we’ve come to expect from a local musician. ‘Fake Smiles’ is a trippy, electro pop anthem that is heightened by the choreographed lighting effects, while the recently released ‘Poison’ sounds particularly potent.

A segue into a cover of the Stones’ ‘Gimme Shelter’ (with riffs intact) is a surprising yet enjoyable addition before we are privileged to be some of the first to hear ‘Enigma’. Set to feature on a new EP pencilled in for April, Rebekah prowls the sizeable stage of The MAC as if she has performed it a hundred times before. ‘Afraid of the Light’ features a line-up change as her band depart and leave her alone with just the three piece string section for company. The slightly sparser arrangement allows Fitch’s huge vocal range to come to the fore and leaves us in no doubt that the vocals on her recordings are no trick.

The band don’t have too long a break and return to the fray on the mental health focused ‘Need To Feel’. It feels particularly potent with its use of vocal loops. Two art forms collide during ‘Not Myself’ as Elena Sheppard gives her impression of the track in dance form, another reminder of the lengths Fitch has gone to, to make tonight a night to remember. Her bold decisions continue with the selection of ‘Guns of Guns’ as her closer. Another completely new song, another sure fire winner which had a real stirring feel that wouldn’t sound out of place on a Bond soundtrack.

The gap between leaving the stage and returning for the encore is minimal which suits all parties. Looking to imbue us with a sense of hope for what is to come, Fitch treats us to one of her early releases in the shape of ‘Hosanna’. Yet it is ‘A Love So Crazy’ that cements the evening as a triumph, the fulsome pop anthem perfectly encapsulated by a stunning lighting show that shouldn’t be confined to theatre style venues. This was a performance and stage show that would put some touring stadium bands to shame.

As the lights flickered back on and we drifted towards the exit, it was abundantly clear that this wasn’t just another show. Selling out such a sizeable venue seems like the perfect end to this particular chapter in Rebekah Fitch’s musical career. What comes next is completely up to her and judging by what she has achieved as an independent artist so far, you’d be foolish to bet against her.